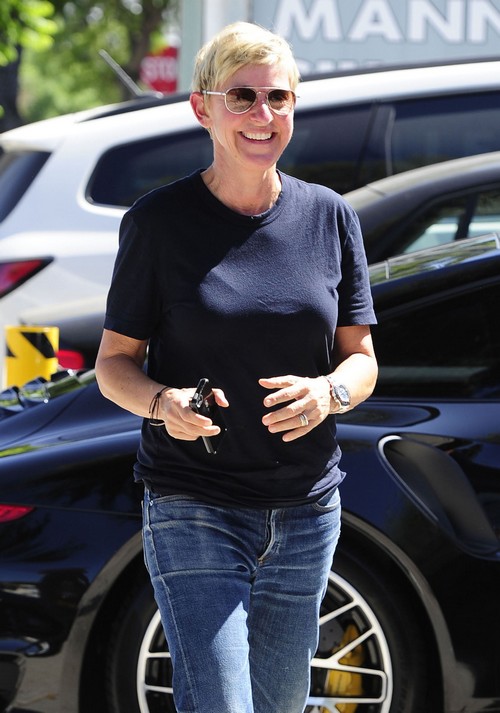 Ellen DeGeneres and Portia De Rossi have reportedly been having a rough time lately, what with Portia’s rehab visit and their ensuing fights. Several reports claimed that Portia was extremely insecure about Ellen’s success, and that she was jealous that Ellen was placing her career over their family.

However, new reports contradict those rumors, claiming that Ellen is, in fact, putting Portia above everything else – including her career. Radar Online’s sources confirm that Ellen and Portia are doing much better, adding, “Ellen says that she will be with Portia forever and that she puts her wife before anything, even her career.”No doubt, Ellen getting Portia a job on Scandal probably helped with Portia’s insecurity and jealousy. One of the biggest reasons that their issues seem to have cropped up this year was that it was a long gap between jobs for Portia, who was most previously seen on the last season of Arrested Development. So long as she’s busy, she doesn’t seem to have any issues. It’s only when she’s left to face the fact that Ellen’s career has been skyrocketing at a steady pace that she seems to get affected, and then turn to alcohol to help her get over the insecurity.

Ellen and Portia have been together nine years, and have just celebrated their sixth wedding anniversary. I doubt they’ll let a little thing like rehab or jealousy stand in the way of their marriage, especially when such matters are so easily fixed.

What do you guys think? Will Ellen and Portia stay together? Or will their problems take a toll on their marriage eventually? Let us know your thoughts in the comments below.