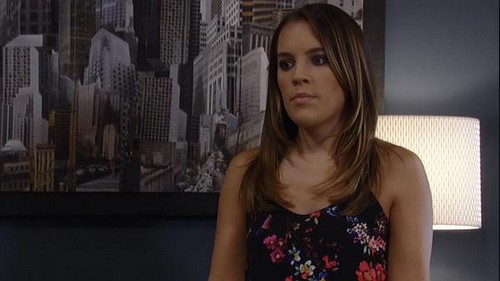 General Hospital Recap and Weekly Review September 1st – September 5th, 2014 is below for your enjoyment!

Tuesday– Sabrina is with Carlos and won’t let up. Under the pressure he finally confesses that he believes Ava is the one that caused the accident so that he would take fall for a murder. Sabrina puts toe and two together and realizes he is talking about AJ. Carlos tells her he didn’t kill him. Carlos also tells Sabrina that Ava never admitted to causing the accident either. Carlos begs Sabrina to move on with her life. Sabrina won’t be dissuaded she is going to of right by her son and Carlos. Sabrina takes off.

Carly meanwhile watches Franco while daydreaming about doing Sonny. Franco sees her and can tell something is wrong. Franco jumps to the conclusion it’s about Lulu and Carly is more than happy to go along with that. Carly apparently booked his next appointment so that they could have lunch together. They kiss and exchange I Love You’s. Franco tells her to go be with her family.

Ava almost takes a tumble on Nina. Nina knows who she is from seeing her legs wrapped around Silas like a noose, or so Nina claims. Ava tells her that was ages ago. Nina tells her it was like yesterday to her. Ava advise Nina to catch up. Nina brings up Kiki and Ava instantly goes in to mother bear mode. Nina tells her she plans on getting pregnant. Nina runs Ava’s tummy and Ava tells her to look don’t touch. Nina leaves.

Ava next runs into Franco and still wants the recording, Franco refuses to get it for her. Ava tells him Carly would rather be with Sonny, Franco disagrees. When Ava tries to throw Kiki in the mix Franco walks away.

Sabrina steps out of the elevator and comes face to face with Ava.

Kiki has a heart to heart with Silas and tells him she supports his decision to be with Nina.

Michael and Morgan go to see Sonny and voice their concern about Maxie and Lulu. As they leave Carly shows up. Carly informs Sonny that her and Franco are doing good and he can never find out that the two of them slept together. Kiki happens to show up outside the door just in time and she hears everything.

Peter (Levi) is getting ready to haul the girls to his boss when they are surrounded by cops. Peter comes out with a gun to Lulu’s chest and demands a helicopter, a grand, and duct tape and handcuffs for both girls. Dante tells him he should let one of the girls go. Peter says they can have Maxie when his demands are met but he is taking Lulu. They have plans for her. Yeah plans that involve Stavros no doubt. Lulu gets ballsy and elbows him. Dante shoots him. Dante and Lulu are reunited. Maxie is looking for Nathan when a bomb goes off sending gas in that knocks everyone out. Some other guys show up and give the all clear so a man in a suit can enter the area, Nathan sees it all from his hiding position.

Wednesday– Kiki tries to take off but almost knocks over a vase. Carly realizes she heard everything and suggest she lie because she doesn’t want Franco to get her by her mistakes. Kiki takes off and hops in the elevator to leave. Carly worries and Sonny tries to keep her calm.

Sabrina and Ava bicker over Carlos for a bit. Ava points out that actions have consequences. Sabrina knows that all to well and tells her she will make the person responsible for her sons death pay.
Nina tells Silas she can have a baby. Silas is surprised that Britt could tell so soon and then he reminds her that haven’t agreed to having a child just yet. Nina leaves.

Patrick shows up to see Silas and he gives him the card he found in his things. Patrick then runs into Sabrina and tells her he thinks he knows who caused the accident.

Nina and Franco catch up. She tells him that having a baby will be harder than she thought. Franco is concerned about the mixed feelings she has for Silas. Nina tell him she knows what she is doing and she takes off.

At the PCPD Obrecht and Britt catch up. Britt tells her about Maxie and Lulu and Obrecht tells her Victor informed her that Cesar is not where he is supposed to be. Britt is curious about Obrecht’s relationship with Victor. Obrecht tells her that Victor carries a torch for her. Britt wonders if Nathan is his son which would make her brother a Cassadine. Of course he is ,that’s the point of this storyline.. Nathan is a Cassadine. I figured that out months ago.

Victor is parading around and basking in the glory while his guys stitch up Peter and then snag the jewels. Victor all of a sudden realizes Nathan is missing and tells him to show himself. Nathan comes in after Victor threatens to shoot Maxie. Nathan gives him his gun. Victor decides to introduce himself before he shoots Nathan. Victor realizes he is Obrecht’s son. Victor wonders who Nathan’s father is since Obrecht kept him from Faison. Nathan doesn’t know. Victors curiosity gets the best of him and he decides not to kill Nathan just yet.

Thursday– Carly tells Sonny nothing can ever happen with them again. Sonny grabs her and kisses her,miserly pushes him a way and leaves. Shawn shows up and offers to take Franco out but Sonny wants him to take care of Ava first. Shawn has a plan to,snatch Ava. Sonny tells Shawn he trust him not to put the baby in danger.

Nina tells Rosalie that she found out after seeing Britt that she can’t have children but she plans on having one anyway and proving everyone wrong. Nina gets online and starts to buy baby clothes. She wonders if Ava is having a boy or a girl. Rosalie thinks she is planning to take Ava’s baby. Nina thinks Rosalie needs a shrink,

Curly shows up before Kiki can spill her secret to Franco.

Patrick thinks Robin’s boss was behind their accident. Sabrina thinks he is way off and tells him to let it go,for Sam’s sake. Kiki apologizes to,Sabrina and Sabrina tells her it’s not her fault.

Sam calls Spin but he hasn’t found a link to the number Sam found on Rafe’s phone. Alexis shows up and they talk about this and that. When talk of Patrick starts Alexis thinks he would be perfect for Sam. Sam tells her they are just friends. Patrick shows up and Alexis makes some funny faces behind his back to amuse and embarrass Sam. When Alexis leaves she cries over Julian.

Ava tells Julian that Franco won’t play along and she is afraid that their boss will hurt Kiki. Julian points out they have a common enemy and they will work together. She then tells him about their run in with Sabrina and how she thinks she caused the accident because she made Carlos believe that she did. Julian tells her she has bigger problems that a nurse. While they are sharing take out she ask about Alexis. Julian tells her he can’t have what he wants most

Friday-Emma is a t hime throwing a fit because she wants her mother. Patrick tells her to get ready for school. Liz shows up with Cameron and he runs off to find Emma. Emma happens to be hiding and listening to her dad and Liz talk. They discuss the accident and he tells Liz he wonders who had Rafe do it.

Sam goes to see Silas and he shows her the card. Sam has no idea what he is talking about since Patrick didn’t tell her about it. Sam tell,him she was there looking into Nina and even though she didn’t find anything she is still sure Nina is up to something.

Franco runs into Carly and Josslyn at Kelly’s. As usual Josslyn is not happy to see him. Curly ends up finding out about Spencer staying at her house. Josslyn sees Spencer and runs out. Spencer is mad at her for telling in him. Josslyn says it’s all Cameron’s fault because she loves him. Haven help us when these kids are teenagers. Emma and Cameron show up and Josslyn and Spencer split them up. While Spencer is talking to Emma she tells him she is in danger and tells him what she heard her Liz and her dad talking about. Spencer tells he thinks he knows who did it.

Carly and Liz watch the kids.

Sam runs into Patrick and ask him what he found out at Crichton-Clark.

Kiki lost in her own world is painting light switches. Morgan notices and ask her what’s wrong. Kiki tells him about his mother and father sleeping together. Just about then Michael shows up.

Nina wants Rosalie to seduce Michael so Nina can get her revenge on Kiki. Rosalie refuses and tells Nina she likes Morgan. Nina doesn’t care.

Nina runs into Franco who apologizes and hopes they can still be friends. Nina tell him they can.

Rosalie runs into Michael, Morgan, and Kiki who are there to take Alice home.