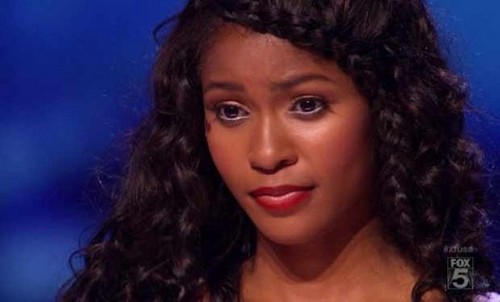 The girl group G.R.L is mourning the loss of one of the groups’ members, Simone Battle. Battle has committed suicide in her West Hollywood home, several media outlets are reporting, after she was found hanging from a rod in her bedroom closet early Friday morning.

Battle’s talent was first highlighted when she was a contestant on the U.S. X-Factor in 2011. Finishing in the top 17, she had gained enough notoriety to try to launch a successful solo career releasing “He Likes Boys” before being recruited by the Pussycat Dolls reboot group G.R.L. Battle’s career in the music industry started even before X-Factor, however, as the young talent toured with the Black Eyed Peas shortly after high school.

Battle shared that she knew she wanted to become a singer at a very early age, telling RCA records that her inspiration was Whitney Houston, according to ABC News. The group expressed their sadness on G.R.L.’s Twitter page, while bandmate Paula Van Oppen posted a picture of Battle on her Facebook page with the caption, “U are real angel now!!! #RIPsimone”

Reign Deer Entertainment, Robin Antin, Kemosabe Records, and RCA Records released a joint statement, “We are deeply saddened by the tragic news of the loss of Simone Battle of G.R.L. Simone was an exceptional young talent and human being, and we are all devastated to learn of her passing. Our thoughts and prayers are with her family and loved ones at this time.” The family has not yet released a public statement, though Hollywood Life reports that Battle’s father, Anthony, is in complete shock because of the lack of any signs she was hurting. He also confirmed that his daughter’s boyfriend is the one who found her body. So far it has been reported that Battle did not leave a note.

Another tragic loss. This beautiful young talent had so much ahead of her. Sadly, there must have been a tormented soul behind that bright smile.

Tell us your favorite memory of Battle below, or share a note of support.