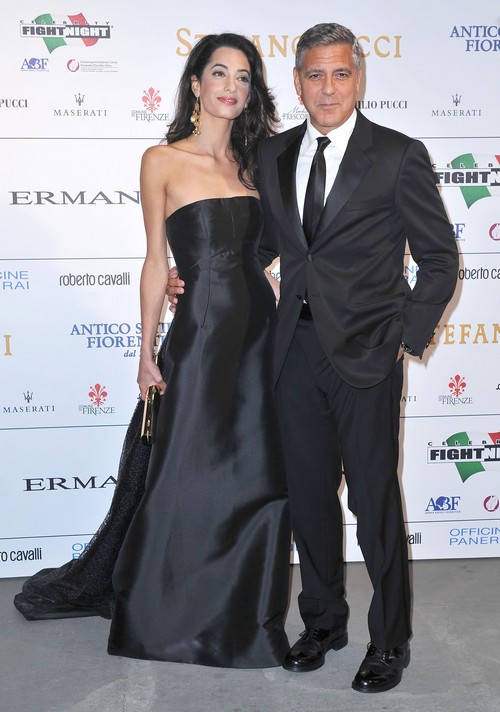 George Clooney has been notoriously tight-lipped about his wedding to Amal Amuddin, but while at an event in Italy, he slipped up and revealed that he and Amal would be marrying in Venice in a few weeks.

George was present at the Celebrity Fight Night charity event in Florence, Italy to receive a humanitarian award. When on stage and giving the speech, he seemed to have a momentary lapse in judgement [or did he?], and revealed the location of his wedding.

He told everyone present at the event, “I met my lovely bride-to-be here in Italy, whom I will be marrying, in a couple of weeks, in Venice, of all places.” He was referring to Amal, who was also present at the event and posed for several pictures with George on the red carpet.Well, looks like all those rumors about George getting married at his Lake Como estate were false. You could reason that he wanted to get married in a location that the paparazzi wouldn’t know about, but now that he’s told the whole world, what’s the point? Even if we don’t know the exact location of the wedding in Venice, you know every pap, PR person, and tabloid will be calling up every possible wedding location in Venice and bribing them to reveal George’s wedding date and location.

Right now, there is no date that’s been confirmed for the wedding, although we obviously know it’s going to be in a few weeks. Is it a coincidence that George’s wedding is coming on the heels of Brad Pitt‘s and Angelina Jolie‘s wedding? Clearly, he’s much worse at the whole ‘sneak away and get married in secret’ thing, huh?