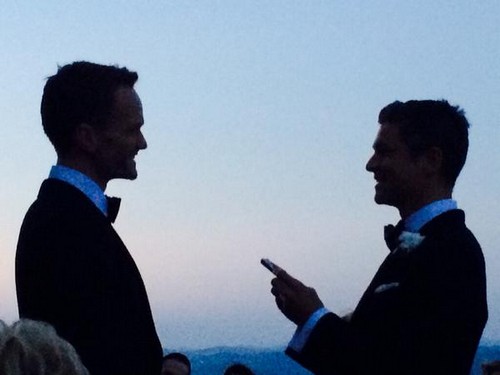 Neil Patrick Harris and David Burtka are married! Well, this is turning out to be a day full of happy news, isn’t it? First, the royal pregnancy, and now wedding news? It’s a nice counterpoint to all the deaths and hacks and sadness that’s been pervading our news media for the past few months.

According to reports, Neil married his longtime partner on Saturday at a castle in Perugia, Italy. The ceremony was reportedly officiated by ‘How I Met Your Mother’ producer Pam Fryman, who is supposedly very close to the couple. Elton John reportedly performed at the reception, and the wedding remained pretty small and intimate considering how many friends and close acquaintances David and Neil have.

Neil shared their wedding photo this morning, tweeting, “Guess what? @DavidBurtka and I got married over the weekend. In Italy. Yup, we put the ‘n’ and ‘d’ in ‘husband.’”The couple’s been together for over a decade and have two three-year-old twins together, so a wedding seemed like the logical next step. It is curious that Neil decided to break the news on Twitter as opposed to People Magazine or some other form of ‘breaking news’ coverage, but it shows that social media-savvy stars are definitely using the most direct form of communication in reaching their fans.

There are a few details being released about the wedding, mostly thanks to Kelly Ripa [who was present at the wedding]. She used her morning show to reveal some of what happened, explaining that Elton John spoke to the crowd before his performance, saying, “You know many many years ago this would not be possible, and we are so thankful and grateful to everybody for supporting us and our families.”

Well, isn’t that just heartwarming? Congratulations to David and Neil, and may they have a very prosperous and happy marriage ahead.