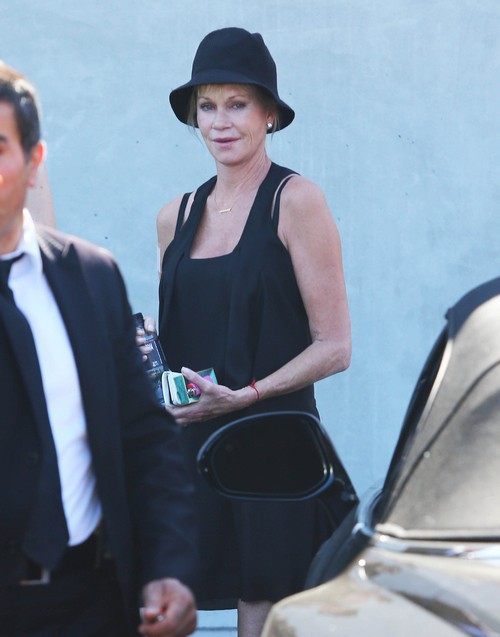 Melanie Griffith is really having a rough year. First she went through the private upset of realizing that her marriage to Antonio Bandreras was a done deal and then Melanie had to deal with the public reaction to it.  When their split was confirmed we also heard more rumors of Antonio’s cheating with a plethora of different woman. It sounded like Melanie was smart to walk away and she probably expected her kids to support her through this rough time.

Instead, according to the Sept. 8th print edition of The National Enquirer, not only does Stella, 17, support Antonio over her mother but also Alexander and Dakota, Melanie’s grown children from other relationships, are also siding with her soon-to-be-ex!  Apparently Antonio has made quite an impression on the entire family and they feel like whatever he did to their mom is less than the garbage that he put up with for 18 years.Sources say that Melanie is crushed to realize that her kids aren’t fully backing her up in this mess. While she knew that Stella is daddy’s girl it never occurred to her that she would have no family firmly planted in her corner. Friends close to the actress have worried that she might fall off the wagon while trying to deal with the loss of her marriage. Feeling like she is losing her kids will only make it that much tougher to make the admitted addict keep herself together.

Do you think that Melanie’s battle with alcohol and drugs played a big part in pushing Antonio away and that’s why the kids are now easily supporting him? Tell us your thoughts in the comments below!