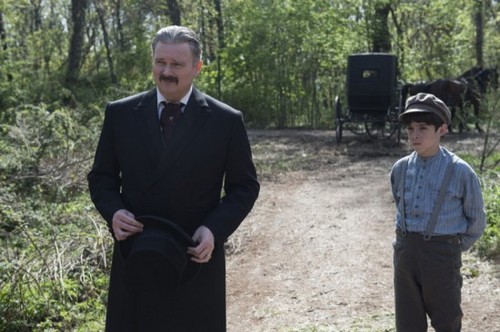 Here is what happened on Boardwalk Empire season 5 Episode 2 “The Good Listener,” below!

Eli is looking pretty bad. Eli wakes up in the top of a warehouse in Chicago. He watches the Feds as they go through and arrest everyone who has liquor. After getting his fill of the events transpiring Eli turns and walks away.

Nucky is in New York having a spot of tea with Johnny Torrio. Torrio tells Nucky he thinks that Al Capone is behind the move into his territory. Torrio than drops the news that Joe Masserai is dead. Nucky ask Torrio,if he might know perchance who tried to have him whacked. Nucky apparently doesn’t believe in coincidence and feels there is a connection between the attempt to kill him and Joe being killed. Nucky tells Torrio he thinks that Myer Lansky was behind it. Torrio tells him that maybe he should take a hint and retire.

Flashback: Nucky and Eli’s sister Susan has just died and his mother is praying over her body. Eli and Nucky are told by their father to say a prayer for their sister. When the undertaker doesn’t show up on time their mother ask their father if money or the lack there of is the reason the undertaker hasn’t shown up. Their mother becomes extremely upset when she realizes that her daughter will have to be buried in Potter’s Field.

Will is at a interview with Robert Hodge. The interview is going swimmingly until the man ask him if he happens to be related to Nucky Thompson. Will responds by saying that you don’t always get to choose your family. Robert tells Will that he gets to choose his employees. Will than begs Robert to give him a chance.

Al Capone is partying like its 1999. Or he his until Mike comes in and tells,him the bad news that the Feds took 20 grand. George Mueller was supposed to pay them off for Capone but the Fed told Mike he never heard from or saw George. Al makes it clear to Mike that George better get his money back.

Elsewhere D’Angelo is blaming George for his money loss and tells George he has a mere 24 hours to get him his money. Which just goes to prove you don’t rob from Peter to pay Paul. Or is it Al? Anyway after D’Angelo leaves George admits to Eli it is his fault all the money has been taken. Eli reassures George and tells him that they will get the money back. To show how much Eli’s words of wisdom mean to George he gives Eli some of his own and tells Eli he smells like urine.

Gillian is taking a steam bath in the asylum. Their is a bit of a ruckus so a guard comes in. Bath time is over. The guard strides over to Gillian and creepily ask what she is. She replies that she is a good girl. She then ask her if she can get what she asked for. The guard replies with a if I get what I asked for.
Nucky is having a pow wow with the board members of the Mayflower again Corporation. Nucky tells them that he has the exclusive rights to Bacardi as in rum. Nucky thinks they should go into business together. One of them ambers ask just exactly what experience Nucky has. Nucky tells him that for the past eleven years he has been one of the most successful bootleggers. Nucky is sure that repeal is on it’s way. None of them are interested in Nucky’s offer. Before Nucky can get good and gone one of the members catches up to,him and tells Nucky that he has the rights to distribute Duers and Champagne. Then another man comes up to Nucky and tells him Torrio says that Sal Maranzano wants a meeting with Nucky.

George’s son Chester wants to know why clouds float. George gives him some reason and then sends him on his way. George sees his wife smoking and tells her that it isn’t very lady like. George then criticizes they way she speaks English and informs her that his children will speak proper English.

George is with Eli and he ask him when the last time was Eli saw his wife. Eli tells George it was six years ago. Next they are robbing some people. Eli tells them thst the money is for Al Capone. Elk then shoots them both.

Nucky comes to grips with the fact he has to live with all of the decisions he has made in his life good or bad. Nucky knows he is thisclose to getting the deal with the grain company. The trick is knowing when to cash out.

Luciano is with Lansky and Benny. Maranzano’s guy comes in after getting a blow job. You can tell the guy is a weasel. ,uciano and Lansky ask if Maranzano is beginning to suspect anything. Luciano decides that it’s to soon after Masseriaz’s whacking to go after Maranzano. The weasel agrees.

Flashback: the Commodore comes to offer his sympathy and he offers Nucky’s father some money so that his daughter can have a proper funeral. The Commodore tells Nucky that he can have the day off. Nucky tells him he would rather come to work. Nucky’s dad comes out and chases the Commodore of his property with a shotgun. Their father keeps the money however.
Nucky is eating with Will and ask him how the interview went. Nucky then ask Will if his name might have you know come up. Will point blank lies to his face and says no. Nucky tells Will he is very proud of him.

Eli and George go to Capone and explain that there was a terrible accident. Capone wants to know what George brought him for lunch. George gives him the brown bag special of 20 grand.

Elliot Ness holds a press conference and tells everyone he will fight Capone. Ness says he will win for the mothers and fathers and their children.

Eli’s is listening to the radio and crying his heart out.

Lansky is having a great time in a brothel until a body gets flung in the front door. Lansky turns the body over and sees it his friend the weasel. There is a post card attached to the weasels head that says “Greetings for Havana”. Lansky knows that Nucky knows.

Check out what is happening next week!