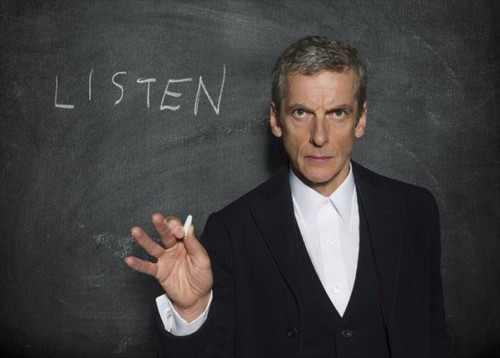 The Doctor Who Season 8, Episode 4″Listen,” is below for your enjoyment!

So the Doctor is alone in the TARDIS. The Doctor starts thinking out aloud and entertains himself by asking why evolution hasn’t been able to create the perfect creature to hide. Or for that matter how would know of it did. I mean other than your own choice to talk to yourself when you are alone of course. The Doctor theorizes out loud what a creature like that might do or what it would want. The Doctor notices that something is writing the word LISTEN on his board.

Danny and Clara meet for drinks. They are having a wonderful time until Clara brings up killing. Danny becomes upset and tells her about his life as a solider and how many graces he dug. This becomes a huge point of contention which causes a even bigger argument. In the end Clara gets up and leaves.

When Clara gets home she finds nine other than the Doctor and the TARDIS in her bedroom waiting for her. The Doctor merely tells her he has a thing he needs her to help him with. Once in the TARDIS the Doctor explains his thing and tells her about his theory that everyone in fact has a shadow like creature that follows them and hides and remains unseen at all times. The Doctor also believes that everyone has the same nightmare about them having a monster under their bed. Man this guy figures out a lot in the time it took her to go in a date and come home.

The Doctor then decides Clara will make the perfect Guinea pig I mean test subject and plugs her into the TARDIS’s psychic interface thingy so it can find the exact point in time she first had the nightmare. The Doctor pretty much just wants to see Clara’s monster. The Doctor warns Clara not of get distracted. When her phone rings he silences it. In just a bit hey are in Clara’s childhood memories.

The memory takes place in West Country’s Children’s Home in the 90’s. Only problem with that is Clara says she never loved in a children’s home. Still the Doctor thinks it’s the right place. The Doctor makes Clara stay in the TARDIS so that she doesn’t run into her younger self. Clara sees a young boy names Rupert who reminds her of Danny.

The Doctor gains entrance into the place by claiming he is there to,perform a inspection. While the Doctor is in the midst of his con Clara sneaks in unnoticed behind him.

Clara goes right to Rupert’s room. Clara wants to know why he isn’t on his bed. Rupert tells her he thinks something is under it and that he has a recurring dream where a hand grabs his foot. Clara tells,him that dreams aren’t real and she peeks under his bed. Clara then crawls under and Rupert follows her. There isn’t anything under the bed. That’s because it’s siting in his bed hiding under the covers which they see when they come back out from under his bed.

Its starts getting taller and taller until the Doctor flips the light switch. The Doctor is reading a book called Where’s Wally. The Doctor tells Rupert that being scared is alright. That it’s a kind of superpower that can protect him from danger. The Doctor has them turn and look out the window so they won’t be looking at the thing on the bed. The Doctor orders the thing in the bed to go and tell,it they won’t look. It gets off the bed and moves closer to,Clara and Rupert. The Doctor tells them not look it’s not meant to be seen. It removes the blanket and they hear the door slam. When they turn around to look the monster is gone but so his Rupert’s cover.

When the Doctor can’t get Rupert to calm down Clara takes over. She pulls out some of his toy soldiers and tells Rupert they are his army. Rupert points to the one without a gun. Clara tells Rupert he is the boss because he is so brave he doesn’t need a gun. Rupert calls that one Danny. The Doctor finally gets Rupert to go to sleep.

When they are safely back on the TARDIS the Doctor ponders why they saw Rupert instead of Clara. The Doctor than explains to Clara that Rupert won’t remember seeing them he will just have a dream about Danny the solider. Clara ask the Doctor to do her a favor.

The Doctor takes Clara back to the point in time where she first left her date with Danny. Clara goes back in to the table and apologizes. They start a conversation and it leads to their names. Danny likes Clara’s last name. Clara accidentally says Rupert Pink. Danny tells her he hasn’t used that name in years and ask her how she knows it. Danny then realizes that Clara’s coat is gone. Just then someone in a biohazard outfit walks in and motions for Clara to get up and leave. Danny is still asking Clara how she knew his name. Clara refuses to tell him. Danny gets upset and leaves.

Clara follows the person in the biohazard outfit onto the TARDIS. The man takes off his helmet and he is a older version of Danny. The Doctor tells her the mans name is Orson Pink. The a Doctor tells,her he used the information she left on the TARDIS to find him and that she will never believe where he was.

The Doctor and Clara travel to the last planet in the Universe. They stand and listen to the silence at the end of time. Orson was apparently part of some early attempts at time travel and he ended up at the very end of time. Orson starts packing so that he can return home. The a Doctor tells him that can’t leave right away because the TARDIS needs to charge. The a doctor tells Orson they will have to stay for the night. Orson tells the Doctor that’s fine. The a doctor then calls him out for lying. The Doctor,points out the planet is dead and yet Orson keeps the door locked. Orson tells them something is out there.

Clara lets Orson know he is safe inside the TARDIS while she and the Doctor go outside. Clara finds Rupert’s toy solider Danny. Orson tells her it’s for good luck. Clara wants him to stay away from time travel when he gets back home. Orson tells her he can’t it goes all the way back to his great grandparents.
The Doctor and Clara happen to notice a a sign that says keep this door locked up above the door to Orson’s ship. The sign only is visible at night which means Orson always need to be reminded about the door. They start hearing noises and to keep them distracted the a Doctor ask her about her date. Clara stays mum with the details. The noises are getting closer and closer. Clara ask why he brought them there. The Doctor tells her he wants to know what the monsters do when there are no people. They hear a knock and the door slowly opens. The Doctor tells Clara to get in the TARDIS. Clara doesn’t want to leave him there but he forces her to. The TARDIS shakes. Orson tells Clara the air has been contaminated. Orson rushes out to pull in the Doctor.

The Doctor is knocked out. They hear more sounds and the TARDIS shakes again. Clara attempts to use the TARDIS’s telepathic circuits in order to get the ship running. It works and so Clara decides she will do the investigating while Orson stays in the TARDIS. Clara comes across a little boy crying in a barn. Two people come in and tell the boy to come in with the other boys. They also tell him this doesn’t look good for joining the army. The second one notes the boy doesn’t want to join the army. The first says he will never be a Time Lord.

Back on the TARDIS the Doctor wakes up and looks for Clara. At the same time the boy in the barn wakes up. He goes to get out of bed and Clara grabs him. Clara tells the boy everything will be ok to just lay down and go back to sleep. The boy gets back in his bed. Clara sits next to him and whispers something to him while she gently brushes his hair with her hand.

When Clara returns to the TARDIS she knows the Doctor is afraid of the dark. She tells the Doctor to leave and never look back at where they just were.

Back on Earth in the present Clara and Danny apologize to one another.