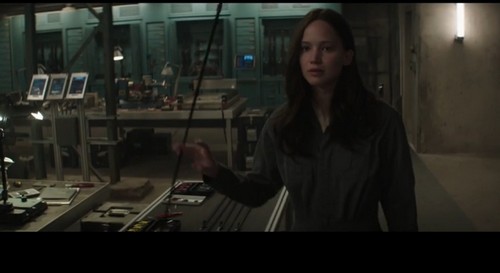 The full-length, theatrical version of the Hunger Games: Mockingjay [Part 1] trailer is finally here. Wow, that’s a doozy of a title to keep typing, but guess what? The trailer is totally worth it, you guys!

It starts off on a pretty downer note, with a little exchange between Katniss and President Snow, and Snow reminding Katniss that it’s the things ‘we love most that destroy us‘. And in other news, Donald Sutherland continues being creep-tastic without getting campy. Also, Jennifer Lawrence = badass.

Then, the epic music begins and we see a montage of all the characters we love and know – Gale, Haymitch, Effie, Beetee – as well as some we don’t – President Coin and Cressida. We see some expansive District 13 shots, proving that this is indeed a revolution. We see scenes of battle, and we also see a massive dam breaking down. And finally, we saw Katniss and Gale blow two hovercrafts out of the sky, before the Mockingjay seal blazes onto the screen, accompanied by the four-note musical whistle that has come to symbolize the series.

Epic? You betcha! The trailer has everything we need, and it looks like it’s catering to both book-readers and non-book readers. For one thing, they’ve clearly expanded on a LOT that wasn’t included in the books, and properly fleshed out the rebellion outside of Katniss’ point of view. Plus, you can tell that the budget’s actually increased, right? No shaky-cam, and increased scope. We can see several aerial shots, as well as several shots from the rebels point of view.

If the trailer is any indication of what we can expect come November, it’s very, very likely that this movie will dethrone Guardians of the Galaxy as the most successful blockbuster of the year.