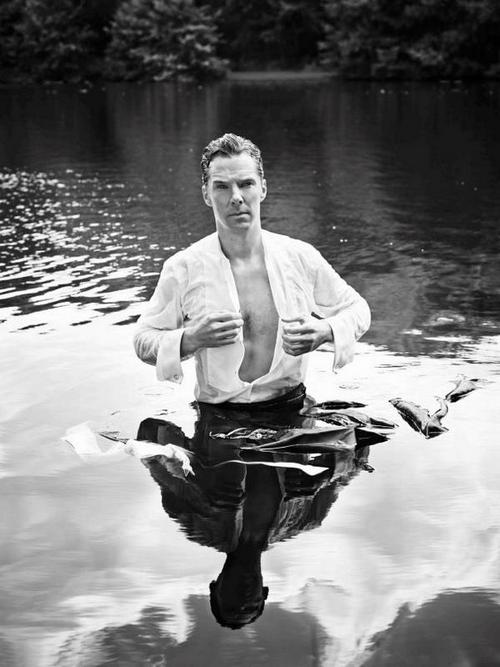 Benedict Cumberbatch is sexy in a way that is intriguing. He appears quite the regular Joe, but then flashes his “come hither” look and you suddenly find yourself in a trance of waiting to do his bidding. Wait…that’s just me?

Regardless of your stance on Benedict, eggs or otherwise, this image of Cumberbatch recreating the Mr. Darcy lake scene circa Colin Firth in ‘Pride and Prejudice’ will get you through tough times. The image has gone viral on social media after a tweet released the CumberKraken.

Don’t get to excited. It’s not a reboot of the miniseries. It’s all in the name of charity. The ‘Star Trek’ star is working with Give Up Clothes For Good campaign in conjunction with Cancer Research UK and clothing store TK Maxx.

The campaign has been running for 10 years. In celebration, images professional photographer Jason Bell has collected of other famous faces including also took pictures of Jerry Hall, Liam Neeson, Mel C and Charlie Hunnam have been collated. The collection is displayed in London’s La Galleria.

To help out this worthy cause, you can donate unwanted clothing to TX Maxx so they can be resold in Cancer Research charity stores. You can also visit CancerResearchUK.org