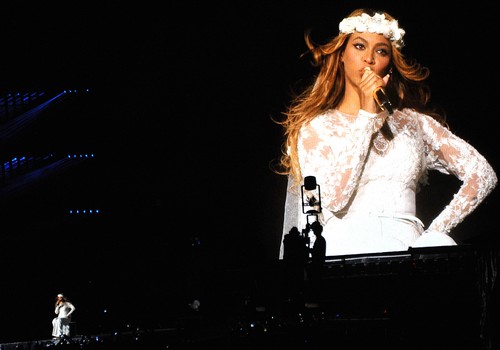 Clearly, Beyonce and Jay-Z are engaged in a major PR coverup, and they’re trying their absolute best to get everyone to forget the fact that they were about to divorce just a few months ago. They’ve obviously changed their minds, and now they’re trying to do some serious damage control.First thing in that order: pregnancy rumors. Pregnancy rumors never fail to do the trick, especially on tabloid covers. Even though we very much doubt Beyonce’s actually pregnant, I wouldn’t put it past her to fake a pregnancy for attention. I mean, we all remember her folding belly debacle, don’t we?

Then, we’re also hearing that Beyonce and Jay-Z had a ‘re-commitment ceremony‘ while on vacation. In other words, they really, really don’t want to lose money from their On The Run tour, and they’ve realized that a divorce would cost them a lot more than just alimony. They’ve backtracked quickly in that regard, and have decided that staying together will be more financially rewarding then getting divorced. So now, all they have to do is convince the audience that they’re still in looooveee, even if that means endless PR shenanigans.

The latest attempt in their PR facade? Apparently, Beyonce and Jay-Z are planning to buy a $85 million house in Beverly Hills. You know, just because they can. I suppose it’s their way of proving their commitment for each other, but it just seems like them showing off.