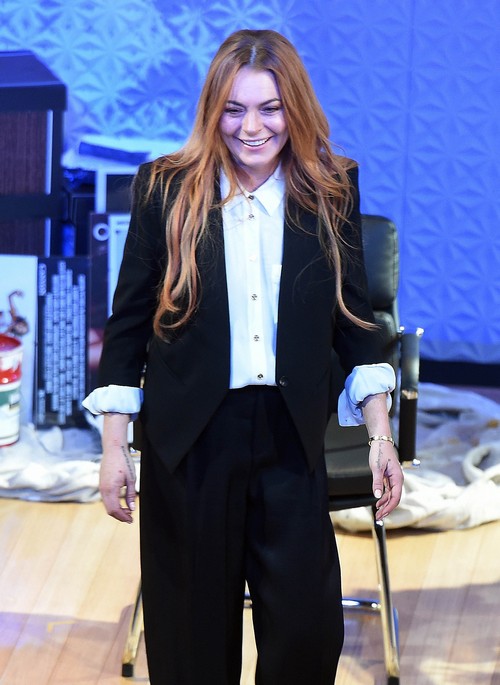 Don’t call it a comeback…really, because Lindsay Lohan’s highly touted return to acting deflated right on stage during her debut in London’s West End as she was fed lines during the opening night performance of Speed-the-Plow.

While reports are suggesting she did completely fail in her role in the show, theatergoers and critics panned her acting labeling her debut a car crash, with audience members giggling through scenes where Lohan was attempting to deliver a moving speech. Given that she continually had to be fed lines throughout the show, and had used props as her own innovative way of peeking at her script.

Perhaps Lohan’s late nights on the party circuit in London contributed to her dismal performance described by London’s Daily Mail as not “an unmitigated disaster.” They go on, “The 28 year-old actress didn’t appear to know her lines off by heart, reading some from a book while being fed others from the side of stage and her one main passionate speech only succeeded in causing the audience to burst into laughter, according to onlookers.”

The Daily Beast was slightly more kind with their review. Though even they commented on the fact that she forgot so many lines, “Although she was sitting staring at a book, which may or may not have contained clues, a third prompt from the wings had Lohan smirking, and she raised her hand to her heart apologetically. By now, even her serious lines were being greeted with laughter. ‘I know what it is to be bad, I’ve been bad,‘ her character Karen emotes. More laughter. ‘Oh my god, it’s so embarrassing,’ said a woman in the crowd during an unusually long set change. In truth, Lohan remained charming throughout.”

Given Lohan’s reputation and her penchant for partying, theatergoers were skeptical before the show even began. Lohan should have put everything into this show to really prove herself, but alas, she chose to be out late and have fun rather than stay in and learn her lines. Now she is paying the price as many audience members took to Twitter and their comments were not kind whatsoever.

Press night is October 2, and it is at that time that critics will be able to officially review the program. So, prepare yourself now, Lindsay, because I don’t think this is going to turn out so well.