The Young And The Restless Recap and Weekly Review September 22 – September 26, 2014 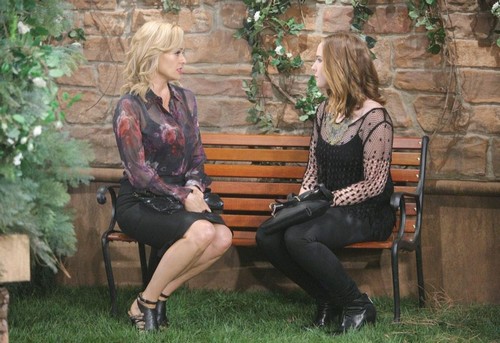 The Young and The Restless Recap and Weekly Review September 22nd – September 26th, 2014 is below for your enjoyment!

Monday- Austin lets Summer know he wouldn’t be able to miss work to go with her to Georgia. Summer decides that she will call the clinic to check in her mother instead.

Dr. Cutler demands the nurse finds Phyllis. The nurse lets him know that Summer is on the phone. Cutler gets on and lies to Summer and tells her there has been no change in her mothers condition. He tells Summer to wait to come and visit but summer tells,him she will be there later that night. He starts to panic and is in a hurry to find Phyllis. Phyllis meanwhile is outside hitching a ride.

Michael is with Avery when Lauren comes in. They jokes that the two of them are having a affair. Avery leaves and they discuss the evening they have planned. Lauren lets him know there is no pressure. Michael tells,her he feels more like himself. They make plans to meet later. When Lauren leaves Michael looks down at his bottle of pills.

Paul tells Christine that the blood on Ian’s jacket was his own. Nikki shows up and ask to speak to Paul alone. Nikki wants to know why he questioned Dylan. Paul tells her that Dylan isn’t on any trouble. Once Nikki is gone he notices mud on a cops shoe that is from the quarry. It matches some he saw on Dylan’s.

Dylan is congratulating Nick and Sharon in their engagement. Sharon thanks him. Avery then arrives and congratulates them.

Mariah tells Victor if he gives her enough money to leave town she will be more than happy to tell him Sharon’s secret. Victor wants the secret first. Mariah tells him that Faith is. It Nick’s daughter. Nikki walks in as Victor is paying her off. Mariah leaves. Nikki warns him about his meddling.

Summer tells Austin she doesn’t trust the doctor. He leaves and Sharon appears. She ask Summer to be her bridesmaid.

Summer wants Avery to go with her to Georgia. Avery tells her she needs a fee days. Summer says she will go ahead of her.

Lauren orders Christine a drink who starts complaining about Nikki. Christine ask Lauren about her and Michael. Lauren tells,her she hopes they are over the worst part.

Summer sees Mariah spill a drink on Austin and decides she can wait to go visit her mother.

Victor goes to Nick and Sharon’s. After Sharon head upstairs Victor fakes a headache. While Nick is gone to get him something to take for it Victor snags Nick’s glass and Faith’s brush.

Michael takes a pill before he picks up Lauren to head back home.

Nikki orders herself a drink just as Paul arrives.

Tuesday– Nick and Victor banter back and forth a bit before Victor leaves. Nick tells Sharon he thinks his dad is up to something. Sharon wants them to go along with it.
Noah is trying to talk some sense into Mariah when Nick and Sharon show up. Nick ask Noah to be his best man at his wedding while Sharon ask Mariah to be a bridesmaid. Mariah is not to keen in the idea until Sharon tells her she will continue to ask. Mariah agrees to do it.

Phyllis gets Ina fight with the guy she hitched a ride with and punches him. When she gets out of the car she sees a sign that says Genoa City is 285 miles. Victor call to,check on Phyllis. Cutler lies to him as well.

Paul gets on to Nikki about her drink. Nikki tells,him it was for someone else. Nikki leaves to call Barbara and cancel their night out.

Christine catches Dylan with a file on Ian wards murder. She get on to him just as Paul walks in. Christine rats on Dylan. Paul tells,him there is nothing new on the case and Dylan leaves. Christine and Paul argue about Dylan then she leaves. Paul finds out the call to Ian’s insurance company was made from Avery’s.

Nikki finds it hard to believe Victor shared a toast with Sharon and Nick.

Dylan finds Nikki at the club. She acts a bit tipsy. She tells,him she doesn’t blame him for anything. Dylan gets up to get her some food. Nikki takes a drink out of the bottle she has in her purse.

Sharon and Nick are talking about how happy they are that Noah and Mariah are on board with their wedding.

Wednesday– Victoria is surprise that Victor toasted Nick and Sharon. Nick tells,her he is up to something and Victoria agrees. Nick plans to test him by asking for the private island for the honeymoon. Victoria offers to authorize the island for him. When he ask how she is she tells,him to enjoy cloud nine and not to worry about her.

Victor is in Sweden with the hairbrush and glass. When the doctor calls he tells him he brought the samples.

Phyllis is eating at a diner when a cop comes in with her picture. Pulls hides. When the cop leaves a waitress tells,her and then gives her some money to get her where she is going.

Michelangelo and Lauren finally managed a night of nookie. When he is alone his doctor calls and Michael tells him he will schedule a check up soon.

Michael runs into Kevin who tells him he is leaving town for a few days.

Chelsea answers the door to Billy who is dressed to pay baseball. He gets her to change by telling her it will make a great first date story.

Victoria spies on Billy and Chelsea from a distance and trips when she is leaving. Stitch sees her and runs over to help. She gets mad and tells,that he was supposed to be the anti- Billy and not break her heart. Stitch tells her he has a confession.
Sharon is showing her wedding dress to Faith. Nick comes in and Faith says it’s bad luck. Nick assures her it isn’t and then tells her he will erase the mistake. He leaves the room and then comes back in.

Kelly wants to make a few changes to the house. Jack calls Lauren who becomes upset but is there to help and tells key to be happy.

Chelsea tells Billy she knows how to throw a baseball. Billy tells her the first date was memorable. Chelsea tells him it isn’t over and they start to undress while they kiss.

Kevin all dressed in black puts a black mask in his bag.

Thursday- Billy is discussing a second date with Chelsea. He suggest they go now but they end up having sex. After they decide to get dressed and have that date. Then they kiss.

Stitch tries to,tell,Victoria his truth but his mom interrupts. Victoria heads back to work. Stitch tells,his mom he wants to tell Victoria the truth. She thinks Victoria loves him anyway.

Avery and Michael are in their new law office. Christine is they thank her for the gift. Mai heal lets it slip about Dylan’s shoes being tested. Avery becomes upset and take it out in Michael.

Dylan and Nikki discuss her MS. After Nikki leaves Paul comes in to talk to Dylan. Paul questions him about calling Ian’s insurance. Dylan says he didn’t but Paul tells him the call was traced to Avery’s. Dylan think Paul wants him for the murder. Paul tells him they don’t even know if Ian is dead unless of course Dylan knows different.

Austin is in a life guard shirt which surprises Summer. She gifts him with a tie.

Billy and Jill banter back and forth when he shows up with Chelsea.

Christine argues with Paul over the evidence he has gathered against Dylan and the fact he don’t share it with her.

Nikki wants her and Victoria to throw Sharon a shower. Victoria agrees to help because it will make Nick happy.

At Avery’s Dylan is packing a bag.

Friday– Noah and Nick are talking about the wedding. Nick wonders if it may be too much too soon.

Avery lets Mariah know her marriage to,Ian is void but that she will still need a annulment.

Sharon is sure Mariah will arrive and eventually she does. Sharon gives Mariah a bracelet. Mariah thinks it’s a bribe but Sharon tells her it’s tradition. Summer has Phyllis’s purse and it has a effect on Sharon. When Nick comes home Sharon tells him about it and says something is wrong.
In Sweden Victor meets with the doctor who will run the DNA test.

Christine and Paul argue some more. Christine makes a call regarding the Chief of Police bringing in his own son.

Dylan leaves a note for Avery and then opens the door to go. Paul is standing there. Paul tells him he looks guilty by attempting to leave. Paul tells Dylan Ian is now presumed dead. Dylan ask if he is there to arrest him. Dylan tells him he didn’t murder anybody. Dylan wants to help Paul.

Hilary is having victims of Dylan while with Neil. Hilary becomes upset when discussing a opportunity she has to go to New York. She leaves and Neil sends Devon after her. Hilary thinks they should keep their distance. Neil hears part of the conversation and Hilary covers by saying it’s about her going to New York. Neil convinces her to go.

Avery tells Summer she can’t get get in touch with Dylan. They have a chuckle when they talk about how Phyllis would be against Nick remarrying Sharon.