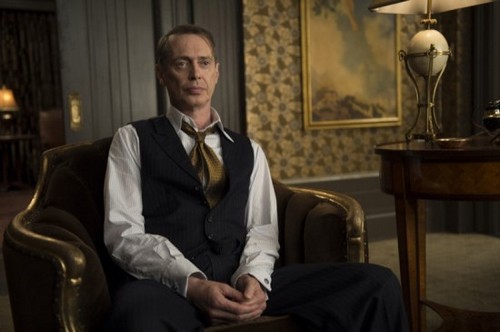 Here is what happened on Boardwalk Empire season 5 Episode 4 “Cuanto,” below!

Flashback: Nucky is sweeping a porch. Nucky heads off to see The Commodore. The Commodore pulls a map of Atlantic City out and tells Nucky that he plans to extend the boardwalk, pave Atlantic Avenue, run trains, ferries, and trolleys. As well as enforce,segregation. The Commodore wants to know why Nucky isn’t in school. Nucky tells him it’s because he works for him. The Commodore tells him he doesn’t anymore and to hand in his bellhop uniform.

Nucky wakes up to his wife Margaret who tells him how Mrs. Rothstein is going to sue them for every penny they have to replace what was stolen from her husband.

This Just In: “Under the Reign of Public Enemy No. 1: Scarface Capone rules Chicago with iron fist.” Capone and his guys all find this to be very funny. When ever they show a dead body a very high Al Capone yells bang. Luciano walks in and tells Capone he is the Italian Wallace Beery. One of the guys waiting in Capone starts to laugh and Capone becomes livid and demands to know why he thinks that’s funny. Luciano steps in and tells Capone that he didn’t do anything wrong. Capone sits back down. Luciano notices Van Alden/Muller but can’t remember why he looks so familiar. All good things in time.

Flashback: Nucky is fighting with Eli.

Nucky has a phone conversation with Sally. Nucky tells her he is stuck due to the storm. He tells her he was supposed to deliver a payoff to Maxime Ronis of Bacardi and now she will have to,do,it for him.

When he gets done he heads into the living room and finds Margaret talking with Joe. Joe is more than happy to offer Margaret a ride back to New York City. Margaret declines telling him she needs to stay put and handle her legal problem.

Flashback: Eli and Nucky are on the beach. Eli becomes extremely upset when Nucky starts yelling at him like their dad.

Sally is at a meeting with investors trying to get some money.

Flashback: Nucky sneaks a key from behind his boss’s counter and then takes Eli to show him the flushing toilets.

Nucky his having dinner with Margaret. They are discussing Mrs. Rothstein. It seems that Nucky wants to kill her in order to make the problem go away.

Meanwhile in Chicago Luciano hands Capone a souvenir from New York of a miniature Empire State Building. Luciano tells Capone he has a idea for a Italian syndicate that could run business through the whole country. Capone is curious about Atlantic City. Ralph brings up the fact that Nucky is not Italian. Lucian them tells Capone that Muller/Van Alden is the guy that busted him with Jimmy Darmody in 1921. Capone ask his men to bring Muller in.

Flashback: Nucky and Eli get caught in the empty hotel.

Margaret and Nucky are having a chit chat about their marriage and how it ultimately failed.

Muller/Van Alden is being accused of being a rat. Capone makes him get on his knees in from of him and he puts a gun in his mouth. Muller/Van Alden starts blabbing and convinces Al Capone not to believe everything he hears. Muller/ Van Alden manages to buy himself some time.

Sally calls the club to let Nucky know she made the pay off when she finds out he isn’t there she instructs Mickey Doyle to tell him.

Flashback: The Sheriff ends up taking Eli and Nucky to his house for dinner. Nucky becomes emotional and begins to cry. He tells the Sheriff he is sorry he broke into the hotel. The Sheriff tells him not to worry and that everything will be okay.

Nucky and Margaret share a kiss on the boardwalk. As she walks away she ask if he is really planning to kill Mrs. Rothstein. Nucky tells her no. Mrs. Rothstein however will only be getting 25 cents on the dollar and it’s Margaret’s job to convince her of that. Nucky then has one of his bodyguards get her a room with a ocean view for the night. Margaret looks let down.

D’Angelo is searching through police files for anything on Van Alden and after a few seconds he hits pay dirt. He finds a most wanted file. Van Alden is wanted for murder.
Luciano tells everyone goodbye. Luciano leaves and Capone spits at the door. Capone makes fun of him. Pretty soon everyone is making fun of him including the guy who’s ass Luciano saved earlier. Capone is not happy about it and tells him he has been friends with Luciano since they were babies. The guy tells,him it was just a joke. Capone laughs and it seems like it’s all going to be just fine. Capone heads to his office while everyone else takes off. The guy starts cleaning up. Then bam just like that Capone is bashing his head in with the Empire State Building and uses the point to be sure. This reaffirms my belief that any prop can and will be used to commit a murder on this show.

Sally is driving back when she is stopped at a checkpoint. They give her a hard time because she is out passed the curfew. She wants to know how much it will cost her to get home. Cuanto she ask. They search her car as well as her persons. They find a gun on her garter. Sally gets back in her car and refuses to get out when she is asked to. When the two men grab her she ends up snatching one of their guns. The other man shoots her. The two men are chided for killing a American and then are told to move her body off the road.

Nucky gets a call from Al Capone. Capone tells them they have a problem named Charlie.

Flashback: The sheriff is taking Nucky and a sound asleep Eli back home in his horse and carriage. Nucky wants to know if the Sheriff would put his father in jail. The Sheriff ask what for. Nucky tells him his dad hurts their mother. He tells Nucky he could but sooner or later he would have to let him go. Nucky ask what he did with the an in the hotel,he used to take flowers to. The Sheriff tells,him that was done for the Commodore and has it’s own set of rules. The Sheriff tells him not to go where he doesn’t belong. The Sheriff tells them to go inside and he will tell their father that they worked for him for the day. They shake hands.
THE END!