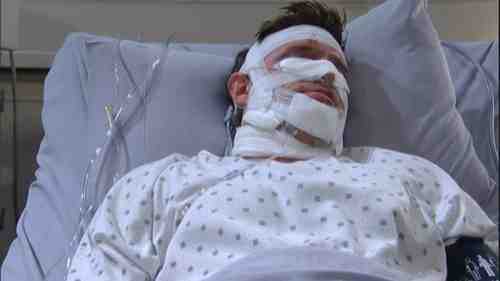 General Hospital Recap and Weekly Review September 28th – October 3rd, 2014 is below for your enjoyment!

Monday– Lulu and Dante are talking to Tracy about Luke. Tracy calls him the patron saint of broken promises. They talk about the fact Luke might be connected to the Jerome’s which Tracy suggest is ludicrous until she remembers that Luke bought her painting from Julian. Dante says it’s possible Luke may be a crime boss. Lulu points out it wouldn’t be the first time. Dante wants to talk to Luke. Tracy isn’t thrilled with the idea but non the less she calls and tells him she wants to see him in person. They thank her.

Sam and Patrick are trying to figure out how they can prove their Luke theory. They think Luke is Julian’s boss. Sam says she will go ask. Patrick doesn’t think he will tell,Sam what she wants to know. Alexis says he can get Julian to tell her the truth. After Alexis leaves Sam worries that it will be to hard for her mom. Sam says it’s difficult to be around someone who have fallen for. Patrick for his part just looks longingly at Sam.

Julian is explaining to Jordan that Kobe is on his way to kill Michael. Jordan wants to stop it. Julian can’t understand why. Jordan brings up the fact Michael is Kiki’s boyfriend. Julian is all desperate times call for desperate measures. Jordan tells him Sonny will burn them to the ground. When she leaves she calls Shawn who is such a ass that he hangs up without even listening to a word she is saying.

Alexis goes to see Julian. She claims that she still,wants him. Julian who isn’t easy to fool ask her what she really wants. Alexis point blank ask him if he is working for Luke Spencer.

Morgan grabs Kiki and scares her half to death. Kiki ask wth. Ava comes out and tries to get her to believe Sonny wants to kill her. When Kiki doesn’t bite Ava tells her the reason he wants her dead is because she knows that he killed A.J.

Franco gifts Carly with a necklace that looks like of all things a eye. After Franco goes to work Sonny shows up. He pretends like he is bent that she is marrying Franco. Which he no doubt is. Sonny then talks to Carly about Ava. Meanwhile Franco is explaining to Nina about the necklace.

Ned and Olivia literally crash into each other at the gym. Ned is as charming as ever. Ned tells her he decided to take the martial arts class because he wants to be like the guys in action movies. Olivia is taking it for the same reason. They head to class together.

Rosalie goes to Michael’s and he opens the door in a towel. She wants to tell him something so he tells her wait till he gets dressed. While she is waiting Kobe shows up to kill him. Michael comes back in and Kobe explains he will all so have to kill Rosalie. Michael tries to talk him down to no avail. Michael ask Kobe who sent him. Kobe says what the hell and is about to tell him when Shawn breaks the door down and points a gun at him.

Sam and Patrick show up at Lulu’s to ask her about Luke.

Tuesday- Julian is doing his best to not answer Alexis’s question. She brings up Sam. After several more go rounds he finally swears to Alexis he isn’t working for Luke Spencer. Which we know is not a lie. Alexis remains doubtful but say thank you a as opens the door to leave. Julian ask her if that a the inky resin she came. He thinks he still has feelings for him. Alexis can’t say she doesn’t and pretty soon they are kissing and pulling each other’s clothes off. Julian stops and tells her he can’t be. Apart of this if a he is just going to walkout in he again. Alexis tells him she instead going to do that.

Sam and Patrick are telling Dante and Lulu their theory about Luke and then tell them Spencer’s tale of woe. Lulu tries to play Spencer’s story off but Sam tells her test it’s possible Julian was the one meeting with “Luke.” “Luke” sends Tracy a message from Amsterdam saying he wants to get together. Patrick says that he and Sam are going.

Sonny tells Carly not to marry the freak. Carly shows him the necklace. Sonny tells her it’s the perfect gift from the king of evil.

Kobe grabs Michael. Shawn tells him if he shoots Michael he will shoot him. Kobe doesn’t care as long as he takes Michael out first. Rosalie tries to run for the door and causes a distraction. Michael and Kobe struggle with the gun and it goes off. Kobe falls dead. Michael runs to Rosalie while Shawn handles Kobe. Michael thanks her for saving his life. Rosalie comments that she thought Morgan was the wild one.

Franco continues to watch Carly and Sonny. He sees Sonny get the call about Michael.

Carly and Sonny show up at Michael’s and after telling Rosalie that nothing happened and that Michel didn’t kill anyone Sonny has Shawn take her home. Carly chews Sonny out for letting this happen after he said it wouldn’t.

Ava is still explaining things to Kiki and Morgan. Kiki doesn’t believe her but Morgan remembers a conversation he had with his father and realizes the terrible thing he referred to was Sonny killing A.J. Ava tells them that Carly also knows the truth.

Wednesday– Julian hears from Ava. He is relieved to know she is ok. Julian then wakes up Alexis with kisses. They get it on again. Julian tells her he isn’t sharing and she needs to call and break things off with Ned. Alexis gets surprised by Sonny while she is looking for her phone to call Sam and Molly. Sonny assumes she is looking for her dignity and ask her if being back with Julian is worth it. Alexis Sk Sonny what he wants. Sonny accuses Julian of ordering the hit on Michael. Julian tells him he would never do that especially after what happened to Lucas. Alexis tells Sonny he doesn’t have any proof. Sonny fires Alexis, threatens Julian and then leaves.

Sonny tells Shawn he wants to know what Jordan knows.

Kiki shows up at Michael’s and he tells her about the bit. Kiki is upset with Sonny. Michael wonders why she has a problem with his dad all of the sudden.

Morgan opens the door to Maxie. She won’t take no foe answer and barges past him. Maxie ask Morgan if she should try and go on a date with Morgan. Morgan tells her the worst days you’re in love are better the best days you’re not.

Nathan goes to see Anna and ask why Obrecht is is still in custody. He wants to know if she did something he isn’t aware of. Before Anna can discuss it with Nathan Jordan comes in. She tells them both about what happened with Ava. Anna thinks now that Sonny is in il ed she can bring both of them down.

Nathan almost runs Maxie over in the hallway. She is there to give him a yes of no to their date.

Sam and patrick discuss Amsterdam. Patrick thinks it might be to dangerous for Sam to go. Sam is all in.

Sam in in Danny’s exam room where Silas is playing with him. He ask about her and Patrick. Sam tells him they aren’t together. Silas tells her Danny is in remission and wishes her luck.

Elizabeth is visiting with the new patient. Epiphany tells her they have had to give him a new face and now not even his loves ones would know him. Elizabeth searches out Patrick to look at the brain scans. Patrick says the patient has had a lot of surgeries. You think Patrick would notice his own handy work. Elizabeth says there is just something about him.

Danny runs off into the patients (Jason’s) room and takes his hand and holds it.

Sabrina runs into Patrick and he tells her he thinks Luke is responsible. Sabrina thinks it’s nonsense. Before they can talk about what Sabrina thinks Sam shows up and Patrick goes with her.

A doctor tells Elizabeth the patient will be waking up soon.

Michael is told by Sonny he is sending him to the is alms until he is sure he is safe. Michael argues with him. Carly shows up and agrees with Sonny. Michael can work from safe life and he can take Kiki with him. Michael packs his things and leaves. Carly tells Sonny she needs to talk to him. Sonny thinks Carly is going to admit they belong together.

Kiki is telling Morgan what happened with Michael. They argue about what they should tell him. Kiki lets Morgan know Rosalie is up to it in her eyeballs. Michael shows up and tells them what is going on.

Maxie turns Nathan down and tells him she wants to be alone for now. Nathan tells her he will be at the metro court if she changes her mind.

Lulu tells Dante she isn’t going to Amsterdam to find her dad.

Maxie goes to talk to Lulu. Maxie ask her to validate the fact she won’t go out with Nathan. Lulu can’t.
Nathan is waiting for Maxie. Nathan is getting ready to leave when Maxie shows up.

Patrick and sam are on their flight. Sam is thinking about Danny and the patient. Patrick tells her about his X-rays. Sam says if reminds her of Jason. Paddock tells her that’s annoying how Port Charles women always stand by their gangster boyfriends. Sam points out he used to be a sexist pig with a God complex. They agree they both have grown up. Patrick assure Sam he won’t make a pass at her.

Elizabeth is taking care of the patient. Monica comes to check on him. Elizabeth starts complaining that she never got her chance with Jason. Monica hugs her and goes. Elizabeth is about to leave when he opens his eyes.

Nina catches Franco watching SCTV. He sees Carly call Sonny a SOB. Nina gets Franco to put the phone down and get some lunch with her.

Carly and Sonny end up having sex.

Franco picks up his phone and is about to delete the app when he sees Sonny and Carly. They are talking about the sex they just had.