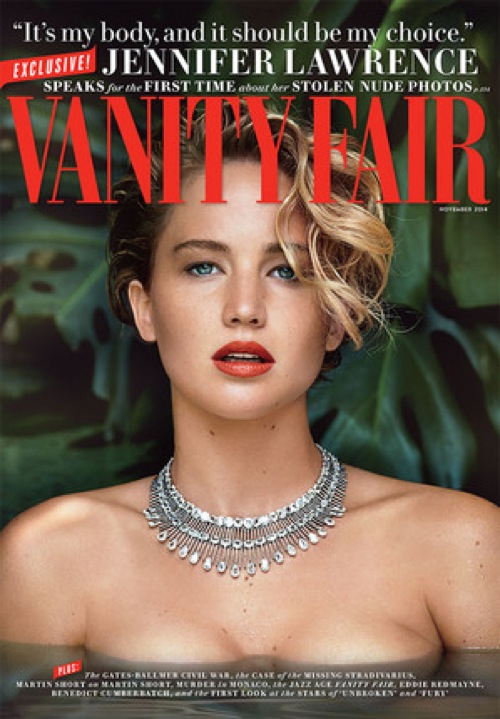 For the first time since it happened, Jennifer Lawrence is speaking out about her nude photo leak. She covers Vanity Fair Magazine [undoubtedly in promotion for The Hunger Games: Mockingjay], and she opens up about how the leak was a ‘sex crime’, among her other feelings on the matter.

She explains, “It’s my body, and it should be my choice, and the fact that it is not my choice is absolutely disgusting. I can’t believe that we even live in that kind of world.” It is not a scandal. It is a sex crime.”

She also added, “It is a sexual violation. It’s disgusting. The law needs to be changed, and we need to change. Anybody who looked at those pictures, you’re perpetuating a sexual offense. You should cower with shame. Even people who I know and love say, ‘Oh, yeah, I looked at the pictures.’ I don’t want to get mad, but at the same time I’m thinking, I didn’t tell you that you could look at my naked body.”

Seriously, Jennifer Lawrence hit the nail on the head with this one. It’s honestly disgusting that people keep dismissing this situation, calling it a ‘scandal’ and letting it go at that. The victim blaming and the slut shaming was out of control from the media, especially after the photos leaked. As Jennifer explains in more detail, she was in a loving and committed long-distance relationship with her boyfriend for over four years [likely Nicholas Hoult] and she mentions that either he could look at porn, or she could give him something else to look at. It was nobody’s business but hers, and it’s unfortunate that people feel they have a right to her body when they don’t.

What do you guys think of Jennifer’s comments? Let us know your thoughts in the comments below.