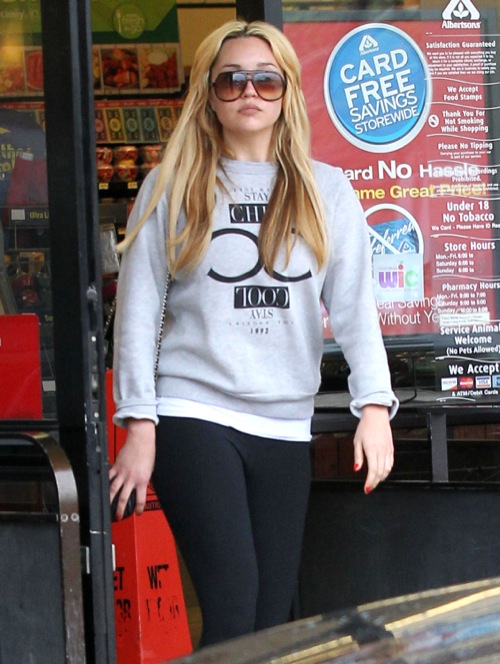 In the span of only a couple days, Amanda Bynes has been seen talking to herself at an airport restaurant in Los Angeles, walking the streets of New York looking disheveled and confused, shopping at Barneys while limping with only one shoe on, fighting at a nightclub with a fan leaving the girl scratched and bruised, and now being accused of shoplifting at Barneys New York. And all of this is after receiving a DUI last week. She added more fuel to the crazy flame when telling In Touch Weekly that she is now engaged to a 19-year-old.

Amanda was pictured earlier today walking around Barneys wearing only one shoe and the same clothes she has on the day prior. Shoppers reported her acting strangely and talking to herself. The former Nickelodeon actress was first pictured shopping with a black hat on that read “death” …could this be a premonition? Amanda sure sure seems to be working hard at what may become a self-fulfilling prophecy as she continues to put herself in danger. This time Bynes not only acted erratically at Barneys, she reportedly also attempted to steal a hat and was accused of stealing from the high-end store after being caught by the store’s security camera trying to walk out of the store without paying for a $200 hat, reports TMZ. Witnesses shared that she was acting crazy and walked out of the store with the hat still on her head.

Once questions by store security, Amanda, who is now wearing an engagement ring, reportedly told them she was being chased by fans and used the hat to cover her face, without any intentions of stealing. Security let her go, but only after she signed a no-trespass agreement which bans her from ever entering the store again. Police arrived shortly after, but Amanda was already gone…probably on to her next adventure.

Any predictions on what is to come for this troubled starlet, HHers? Tell us below.