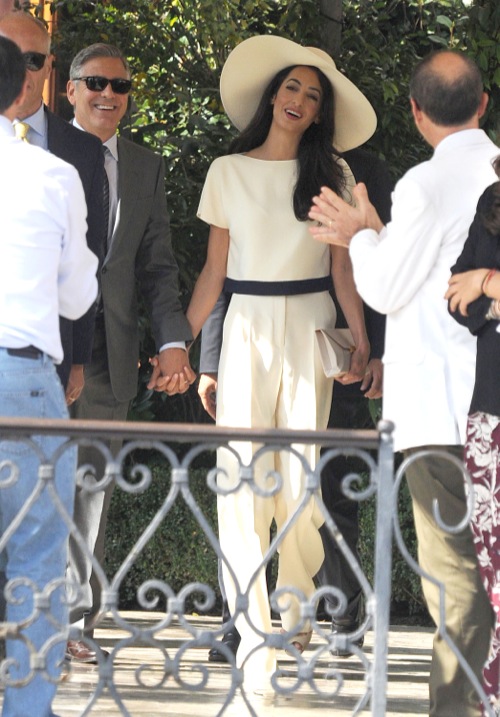 George Clooney and Amal Alamuddin haven’t even been married for a week, but the baby talk has already begun. The rumor mill is already spent on discussing the possibility of Amal getting pregnant, so now they’ve moved on to George and Amal adopting children.

The National Enquirer claims that George and Amal are, “adopting at least three kids and starting a family ASAP.” Apparently, George and Amal have been ‘influenced‘ by their close friends, Brad Pitt and Angelina Jolie, Cindy Crawford and Rande Gerber, and John Krasinski and Emily Blunt. If someone told me two years ago that George Clooney would be getting married, I would have laughed at them. But since that’s come true, why shouldn’t this come true? George may have said that he doesn’t want a wife or kids in the past, but that was before he met Amal Alamuddin. And for all intents and purposes, he’s head over heels for her. If she wants kids, I doubt he would say no.

Now, I don’t know why the tabloids are claiming that George and Amal will be adopting as opposed to having their own children. Amal’s only 36 years old, and men older than George have children every day. Now, they might not want to wait, in which case adopting would be the logical choice. For someone of George Clooney’s influence, there won’t be as many hoops of bureaucracy to go through to adopt a child. However, he and Amal literally JUST got married. I think discussing their future children might be jumping the gun a bit, no?

What do you guys think? Will George Clooney and Amal Alamuddin have children, biological or adopted? Let us know your thoughts in the comments below.