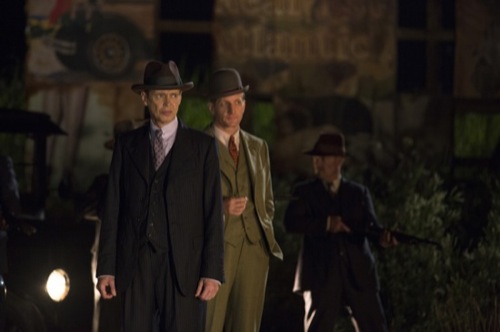 Here is what happened on Boardwalk Empire season 5 Episode 7 “Friendless Child,” below!

A radio address is being given. It pretty much says that the people are in the middle of a war with the mob. Nucky is listening intently while sipping a drink.

Nucky is bitching to Maranzano about what I assume is the take away from last weeks closer which caused Nucky to lose a lot of money. Maranzano tells Nucky he needs to be patient after all it is a virtue. Nucky pretty much says fuck that and sends some of his guys out to New York for some errand running.

Thompson is being put through his paces by Hodges. Thompson gets a call and at first gives a stern no. However after listening a bit longer he changes his mind and says he can meet with them later on that night.Benny Siegel who has quite cornered the market on Vegas yet is apparently doing the horizontal mambo with a married woman. When Benny is leaving the apartment Nucky’s men attempt to grab him and after a few gunshots and a little bit of chaos they get him.

Flashback: Nucky comes across Gillian. She has been stealing things. Nucky takes her back home with him and gives her dinner. Nucky and his wife argue what is best for her. Nucky wants to send her back to the orphanage but his wife wants to raise her as their daughter. The next day Nucky’s girl has Gillian dressed up. Gillian ask if thier is any work she can do to make up for what she has done.

Mr. Siegel is getting the hell knocked out of him while tied to a chair. Nucky gets the mob offices of Lansky and Luciano on the phone. At first they call his bluff and hang up on his ass. Nucky undeterred calls back and tells them what’s what including the fact he has Benny. Luciano becomes enraged and threatens to kill him.

Margaret gives Nucky a call. Nucky tells her whatever she wants he has no time for that.

Eli disguised as a homeless guy goes to see his son Willie. Willow tells Eli he can use his house and go get cleaned up. Eli simply walks away. When he turns back he sees willy getting grabbed and a bag being out over his head as he is put in a car.

Eli shows up at Nucky’s. Nucky tells him he better have a damn good reason for being there.

Nucky along with Eli and some of his guys meet with Charlie so they can get Willie back. Nucky is supposed is going to hand Benny over in exchange for Willie. Mickey steps out in the middle of all this to suggest they lead to get along. Mickey receives a deadly shot as the rebuttal. Willie breaks free but then gets punched by Benny who brings him back to good old Charlie. Charlie tells Nucky he wants everything he has in exchange for Willie. Nucky agrees to it. Just when it looks like Nucky will die he tells Charlie he will have Maranzano killed.

Flashback: Nucky is called from home to take care of discreet matter for the Commodore. They make it clear he is into young girls just in case we didn’t catch on to the hints from last week. Nucky is told to make sure the little girl gets home safely. When Nucky returns home Gillian is gone.

Meanwhile Al Capone is getting taken down by the Feds for tax evasion.

Nucky has Eli kill Maranzano. Willie is returned. So to recap Nucky has lost absolutely everything to Lucky Luciano. Funny thing is Nucky seems to not really give a damn.

Nucky receives a letter. When he opens it he funds it’s from Gillian. Gillian begs him to help her get out of the mental institution she is in. What will Nucky do?