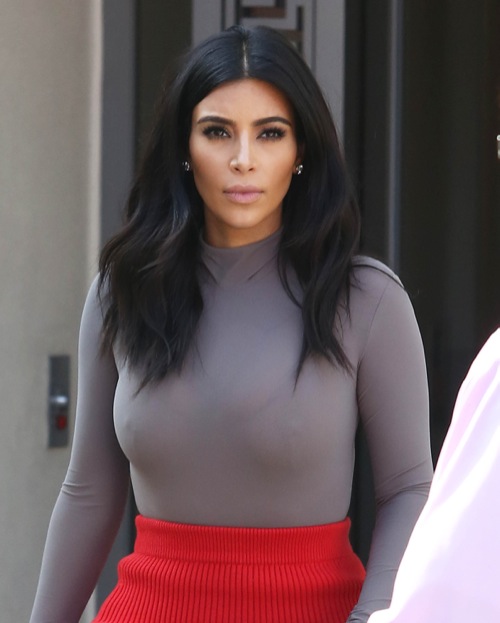 Amber Rose has apparently become the next Monica Lewinsky, at least of the D-list and F-list reality star crowd. Just weeks after Amber supposedly homewrecked Mariah Carey‘s marriage to Nick Cannon, a new report from Star Magazine claims that Amber is about to do the same thing to Kim Kardashian and Kanye West.

Kim and Kanye are reportedly already on the verge of imploding, especially considering how little time they spend together, the amount of time Kanye spends on his career and traveling, and their no-doubt weird co-dependent relationship. However, there is no way that Kim is going to leave Kanye, not when her entire fame and career is dependent on their marriage. But alas, she could certainly threaten him, no?

Star’s source claims, “Kim is dealing with a serious bout of insecurity, and fears that her husband will step out on her with some of the fashion world’s biggest stars — including Cara Delevingne, Amber Rose and Rita Ora.” Oh, Amber Rose has become one of the world’s biggest stars now, has she? It is just me, or does this report REEK of Amber Rose? The whole scenario, cooked up and dropped off to remind the world that Kanye might be cheating on Kim with supermodels.

The woman already broke up apart one marriage, and she’s clearly trying for yet another one that seemed weak and fraying at the edges. But Kim Kardashian and Kanye West, as much as I hate to admit it, just have this mutual agreement. Kanye doesn’t need to spend all his waking moments with Kim and the baby, and Kim can forgive Kanye for going and hooking up with his mistresses whenever he feels like.