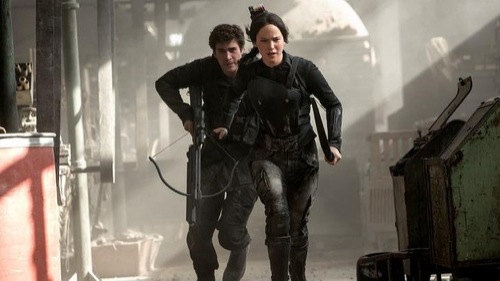 The Hunger Games: Mockingjay Part 1 is just weeks away from being released in theaters, and the TV spots and trailers are starting to roll in. As per the promotional campaign, there was a new TV spot called ‘Choice’ released this morning, and it’s the first time we see a tortured and bloodied Peeta [Josh Hutcherson] alive!

The teaser mainly focuses on Katniss’ [Jennifer Lawrence] state of mind following the destruction of District 12, and her reaction to seeing Peeta alive. We already saw some of this in the main theatrical trailer released a few months ago, but this is the first time we actually see the impact of all the torture and abuse Peeta went through. His face is bruised and bloody, and he looks terrified and emotionally spent. Man, if this small snippet is causing this much feeling, I can’t imagine what the movie’s going to do.

There’s also a brief glimpse at Katniss’ pull between the two men in her life, with Gale [Liam Hemsworth] telling her that he would ‘never’ say what Peeta just said, even it that meant his death. Surprisingly, this actually comes off a lot better in this teaser than it did in the book, where it just seemed like a little petty ranting coming from a jealous boyfriend.

In fact, this whole movie seems like it could be a giant step up from the book, which is considered by many Hunger Games fans to be the worst of the series. Francis Lawrence has proven that he has the chops to carry this serious through to the finish, since his Catching Fire was both critically acclaimed and the most commercially successful film in the franchise so far. Plus, Jennifer Lawrence’s popularity continues to rise and from the look of this teaser, the film’s bound to add to the franchise’s quality.