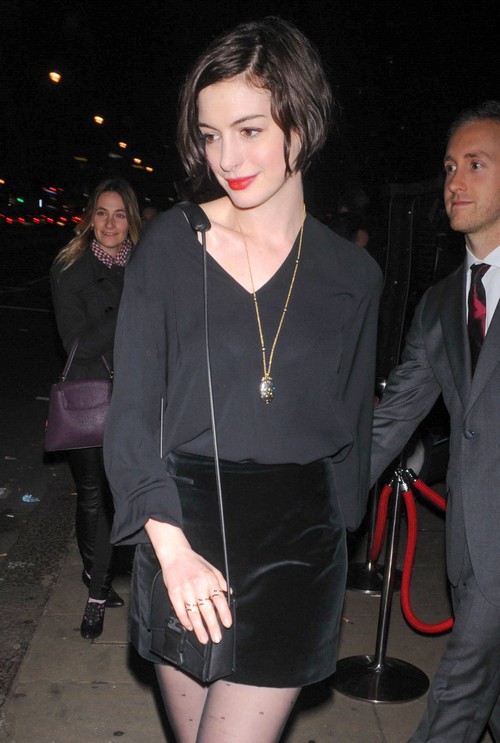 Anne Hathaway has had her fair share of detractors on the Internet, and that list is only going to grow after people hear this latest report. According to an Argentinian journalist by the name of Alexis Puig [who met Anne during the Interstellar press junket], Anne Hathaway didn’t want to shake his hands because she was afraid of catching Ebola.

Puig took to Twitter to air his anger, writing, “Anne Hathaway didn’t shake my hand because she was she was afraid of ebola #I’mAThirdWorldJournalist. Christopher Nolan, Matthew McConaughey and Jessica Chastain were genial in the interviews (and none of them denied me their hands). Take that, Anne!”Of course, Anne Hathaway has already sprung into damage control mode, even though the damage is done. It’s not clear whether Anne was refusing to shake all journalists’ hands, or whether she was singling out this poor journo because he was from Argentina – which is currently Ebola free, by the way. Both options make Anne look terrible, and her diva reputation isn’t going to improve after this.

For what it’s worth, Anne’s team has denied the rumors, and Anne claims that she had a cold during the press junket. She supposedly didn’t want to give anyone a cold, hence the refusing to shake hands. I don’t know whether to believe this excuse, only because other journalists haven’t come forward with their stories yet. IF Anne did single out this guy because he was from Argentina, then she’s both ignorant AND rude. If she refused to shake everyone’s hands because of Ebola, then she’s just ignorant [the chances of catching Ebola from shaking hands is next to nil]. And if she refused to shake hands because SHE didn’t want to pass on her cold, then she was being kind. Which one is it?