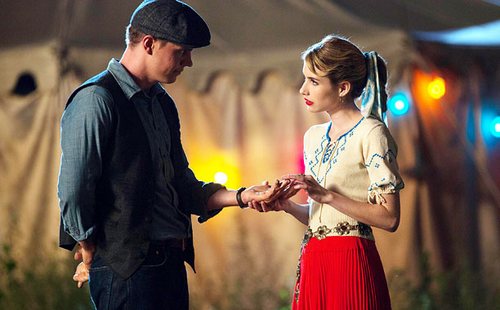 Stanley is with Maggie at a exhibit gala at the museum. They are talking and she is sipping champagne. The gala starts and the museum lady has sheets pulled off of tanks and inside are the freaks. Dead.

Maggie is at a hotel with creepy Stanley. She tells him that is a real nice fantasy he had going on there. Stanley’s brilliant plan is to kill all the freaks and then put them in some kind of preserving liquid in a tank and then sell them to the lady at the museum. Maggie isn’t into the whole murdering of people thing. Stanley works his magic on her however and soon she is along for the ride with him. Stanley tells Maggie his goal is to get close to Elsa and gain her trust.

Meanwhile over at Toothy 2.0’s his mommy finds the dead maid. She starts screaming like the bat shit crazy person she is and 2.0 comes running down the stairs. Gloria knows right away that her son is the culprit of this ghastly crime. Gloria tells 2.0 she will clean up this mess just like she has cleaned up all the others. I don’t even want to know.

Stanley is busy working Elsa he is promising the moons and the stars and all the cheeseburgers she can has. He tells her he works for WBN which is apparently the biggest broadcast network. I bet Rupert Murdoch would beg to differ. Elsa thinks he is out of his damn mind when he tells her he wants to put her on TV. Elsa says no way no how.

Jimmy is out looking for Dell and he finds Desiree instead. Jimmy for whatever stupid reason decides he wants to make out with her. Desiree tries to pretend she doesn’t want to be used but then figures what the hell. She wants Jimmy to make her feel. Jimmy begins pleasuring her with his fingers then she starts screaming and not in a good way. Jimmy pulls his fingers away and sees that they are covered in blood. Jimmy helps her out of the trailer as blood streams down her legs. Ethel comes across the two and tells Jimmy she will take Desiree to get help. Ethel tells Jimmy to get to the big tent. Jimmy runs in and introduces the next act….Elsa.

Nobody wants to see Elsa or hear her sing. They literally throw things at her while yelling rude comments and telling her to get off the stage. Elsa is absolutely embarrassed. She invites Stanley to her tent and ask him to tell her more about the television ideas he has for her. Stanley is thrilled.

Ethel has Desiree at the doctor who treated her so kindly. The doctor ask her if she has a period every month. Desiree tells him no only a few times a year. The doctor examines her and then tells her she int a male but just has a extremely large clit. He then tells her the blessing she had earlier was causes by a miscarriage. Now if he could just explain away the three tits.

Mommy and 2.0 bury the maids body in their yard. Since mommy wanted a garden they figure why the hell not and throw some flower bulbs on top.

Elsa is going to take publicity photos with Stanley or at least that’s what she thinks until she sees him drive off with Bette and Dot. Elsa is not a happy camper.

Next we see Stanley showing the girls off to the lady at the museum actually just their heads in one of his tanks. She ask what happened. Stanley tells her it was a cold that turned into pneumonia. Then Stanley has a Pink Cupcake which he injects poison into. Stanley then takes the girls on a picnic where he presents them with the lethal confection. Stanley is sitting with them Bette is already dead and Dot is begging him to help to take her to the hospital. Instead he offers her the second Pink Cupcake. Bette and then Dot dies.

Back in reality Dot is telling him thanks but no thanks they must keep their girlish figure if they are to be on TV.

2.0 is in the playroom. Nothing on but his underwear. He is doing jumping jacks and hitting a speed bag. Rubbing oil on himself and posing in the mirror. He plans on being the US Steel of Murder. He is going on about Toothy’s purpose being to teach him the fine art of murder. 2.0 states the obvious in saying he isn’t a clown. However he believes he is the future and the future just happens to start that night.

2.0 goes to a gay club. He sees a wanted poster with a face wearing a clown mask. He smiles sadistically. 2.0 sees Dell but has no idea he is with the freak show. Dell is their with his gay lover. Dell tells his lover Andy that he loves him. Then Dell kind of breaks down and tells him he hates seeing him give himself to men who don’t give a damn about him. Andy who is clearly the type of guy who’s time you have to buy tells Dell that the club is where he works that it’s his office and when he is there he is working. Ouch. Dell leaves. Seeing red no doubt.

Elsa and Bette and Dot are competing for who has the best offer from Stanley. Elsa lies through her teeth and tells the girls Stanley asked her to be their mentor. Elsa then tells them that in the morning she will be taking them to see a seamstress who will be making them some new outfits. When she leaves Dot tells Bette that Elsa is playing at something. Bette says who cares as long as she gets a hat.

Dell gets back home. Desiree is waiting. Dell tells her he has been looking for her. Desiree tells him the doctor told her she is 100% woman and can have babies. Dell tells her that’s great even though you can tell he doesn’t mean it. Desiree says it was until Ethel told her it was his dad that had the lobster hands. Desiree tells him off and then calls him on being Jimmy’s father. Dell ask her who gives a shit about Jimmy. Desiree grabs her stuff and tells him the doctor is going to make her a real woman and that she is staying in Ethel’s caravan. Dell watches the door slam.

2.0 is with Andy in Toothy’s van. Ummmm wouldn’t the cops have taken that for evidence? 2.0 and his newest victim are in their undies. 2.0 puts on the Toothy mask. 2.0 starts stabbing him over and over and over. Andy is still breathing. 2.0 who is I’m sure giving himself some tips and pointers says that the number one rule to being a good killer is getting rid of the evidence. No stupid that’s rule two. Rule one is making sure they are dead which poor Andy clearly is not. 2.0 saws off Andy’s arm. I don’t know how but he is still alive. Andy begs 2.0 to kill him. 2.0 can’t believe what he is seeing and hearing. He quickly pulls himself together and saws off his other arm.

2.0’s mommy answers the phone in her garden. Regina (Gabby Sidibe) is on the other end. She wants to talk to her mother. Gloria tells her she is at the pharmacy and with the holidays she will probably be busy and won’t be able to talk. Regina insist she has her mother call her as soon as she gets home. Gloria ask her if she remembers what kind of a mother she was. Regina tells her she saw the nannies more than her. Regina tells her she needs to go and hangs up. 2.0 shows up behind her covered in blood and says mother. Gloria runes around and cries. She tries to scream but no sound comes out.

Elsa is driving Bette and Dot out of Jupiter. When Bette questions her she says she has a even better idea.

Dell goes to see the doctor. Dell breaks his hand and then threatens to hurt his family if he lays a finger on Desiree or tells the cops what he just did to him.

Doorbell rings at 2.0’s house. His mom answers it. It’s Elsa. Gloria ask her what she is doing there. Elsa tells her she has brought her something she believes she wants.