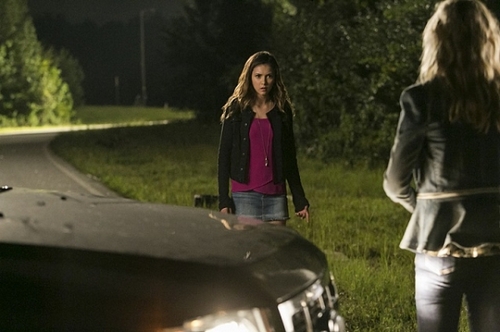 Tripp is driving his van. Ivy and a few more vampires are tied up in the back. Trip explains to Ivy that this is not a life she wants. He drives into Mystic Falls and all the vampires go up up and away. Unbelievable they kill her bring her back and then kill her again. Unbelievable.

Stefan and Damon are still hugging it out.

Caroline lets Elena know the one the only Damon Salvatore has returned from beyond the beyond.

Damon is telling Stefan he was stuck in Mystic Falls circa 1194.

Stefan makes Damon aware that Alaric compelled Elena to forget all about him per her instructions. Damon thinks that he will be able to remind her.

Elena makes Alaric promise he will not make her remember anything until she ask him to. Alaric tells Elena about the non compelling of Jo and ask her to find out why she is immune to it. Elena tells Alaric to give Jeremy a call and tell him what’s going on.

Jeremy is heading out when Sarah reminds him he is supposed to be helping her. Jeremy tells her she is just going to have to wait her turn something more important has come up.

Matt drops in to see Enzo. Enzo assumes Matt is there to break him out. Matt sets him straight. Enzo tells Matt either you help me or I tell Tripp about a few of your friends Stefan, Caroline, Elena.

Next Tripp stops by to see Enzo. Tripp tells him it’s either talk time or poof time.

Matt tells Caroline and Alaric about Tripp holding Enzo and him killing Ivy the previous night. Alaric ask Matt how Tripp got his hands on Enzo. Stefan shows up and says that was me.

Damon wants to talk to Elena. Elena is it in the chit chatting mood. Damon tells her if she doesn’t open her door he is going to get pro active and kick it in. Elena unlocks and then zooms out the window before Damon can get in.

Elena is talking to Stefan and tells him she would rather jump out her dorm window than give Damon a moment of her time. Elena says she made the right choice by forgetting. She then tells Stefan she kissed Liam. Stefan advises her to keep that last bit a secret from Damon.

Elena is watching Jo’s every move. She even takes a sip of her coffee. Jo wants Elena to go with her.

Matt is snooping around in trips office when Sarah shows up. She ask about Zach Salvatore and he directs her to a drawer.

Alaric finds Damon waiting for him when he gets home. Damon complains about his Elena problem. Alaric tells him he did what she asked. Damon ask him to undo it. Alaric says he can’t unless Elena wants him to. Alaric tells Damon that Elena is happy. Damon wants the two of them to be happy together.

Stefan is trying to defend his dumb ass move of turning Enzo over to Tripp by telling Caroline he did it because Enzo was a loose canon. Stefan lets Caroline know he plans on getting Enzo back for Damon. Caroline would like to know just how he plans on doing that. Stefan and Caroline head in the building but they find that Enzo is no longer there.

Elena is attempting to touch a bracelet that Jo is wearing. Jo cuts to the chase and tells Elena she knows all about her and Alaric and who they are. She tells Elena if she takes anymore blood bags she will get her.

Damon is roaming around Elena’s dorm room. He looks at the pictures that are out and about he notices he isn’t in a single one. Damon gets comfy on her bed. Jeremy is with him and he ask Damon why Bonnie isn’t there with him. Damon fins and tells Jeremy he was all by himself. Jeremy then tells him about leaving her hound connected so h can hear her voice and leave her messages. Damon tells him he might ring it up.

Elena is curious as to how Jo knows. Jo tells her she didn’t until Alaric attempted to compel her. Elena wants to know what Jo is. Elena thinks she is a witch since they can prevent compulsion.

Matt is still searching trips office when Caroline calls and lets him know Enzo was moved. Matt sees Ivy’s phone and tells her she was the last number Ivy called so Tripp is probably headed her direction. Caroline freaks out.

Damon calls Bonnie’s number and is leaving her a message which is a pretty stupid thing to do. What if Jeremy calls it and checks it? Damon gets another call and switches over. It’s Elena and she wants to see him. Damon tells her he is at her dorm waiting. Tripp comes in and shoots a dart at him. Damon catches it in midair. Next he grabs Tripp and ask him what his deal is. Before he gets a answer two of Tripp’s guys come in and take Damon down. Elena comes in and sees the mess. Elena calls Alaric in a panic. Alaric tells her to,go find Caroline and not to worry they will get Damon back.

Alaric is locking up when Jo comes by. Jo ask him if he wants to compel her into leaving. Alaric gets to the point and tells her he needs to go save his undead friend and it’s probably in her best interest to stay the hell away from him.

Damon comes to sitting next to Enzo who is also in chains. Enzo tells him it’s been nice semigloss you but we are about to take the big dirt nap as soon as we get to the city line of Mystic Falls. Enzo then tells him it’s all Stefan’s fault. Damon ask how’s that. Enzo explains how he killed Stefan’s new girl. Damon is like yup that will do it.

Caroline’s mom is on board the save Damon train we find out when she lets her daughter know she has one road to town closed. Elena and Caroline rush to the other one and make with the pretend using a tire. Elena tells her if Damon lives to see another day she wants all her memories back to hell with that whole new life thing she was talking about.

Stefan and Alaric are at another road. Stefan rios the insides of a jeep out. Stefan tells Alaric all this rest on his shoulders. Alaric says not really we all pretty much gave up. Alaric sees the van and tells Stefan to hide. He tells him to let Elena know what’s going on. Alaric gets Tripp to stop and he ask for his help with his jeep. Alaric punches out Tripp’s window. Tripp however is ready and puts a dart in Alaric. Then he attempts to drag Alaric over the line. Tripp hits the jeep and the van goes for a ride. Stefan runs over so he can see about Alaric and Damon. Never mind Enzo.

Stefan tells Elena he needs to get off the phone. Stefan tries to get to Alaric but he can’t get past the barrier. Enzo and Damon aren’t doing much better. Stefan rushes to get them out of the van.

Jo shows up to save Alaric. She puts some special gauze on him. Alaric does anyway but she does CPR and he comes back. Alaric tells her something feels different. No tells him she needs to get him to the hospital.

Caroline lets Elena know that they all made it. Alaric managed to cross the border. Caroline tells her that he died but Jo brought him back and when she did he became human again. Elena is stunned probably because she can no longer get her memories back. Caroline is equally as stunned but I think it’s because she now knows she could be human again.

Matt takes Sarah hime and tells her she has been staying in the house of Stefan and Damon Salvatore. Matt tells her if she is wise she will steer clear because nothing comes from knowing them except pain and misery.

Sarah finds Jeremy freaking out because he can’t remember Bonnie’s pass code to her phone. But just wait until he does. Sarah tells him to calm down and everything will be alright. Jeremy tells her it will never be alright again because Bonnie is gone.

Elena is talking with Alaric. Alaric lets her know he is ok. Elena tells him she is happy that he is human again but just wishes she could remember things about her and Damon. Alaric wishes her luck in remembering on her own. They hang up.

Jo walks in to his hospital room and Alaric thanks her for saving and giving his life back to him.

Stefan and Damon are drinking. Stefan tells him he is sorry that things didn’t work out the way he hoped. Stefan tells him Alaric told him that Elena is happy without Damon. Damon would prefer she be miserable without him instead.

Caroline comes by to see Stefan. Stefan wants to know how he can right his wrong and they can go back to being friends. Caroline tells him she no longer wants to be his friend. Caroline leaves.

Damon shows up at Elena’s dorm room. When she opens the door they just look at each other.