The Young and The Restless Recap and Weekly Review November 3 – November 7, 2014 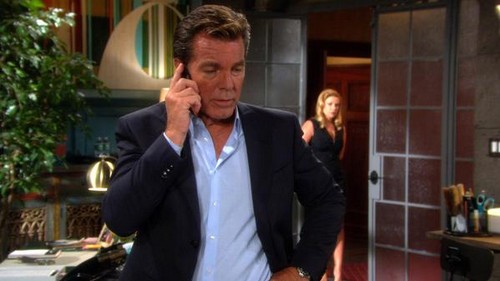 The Young and The Restless Recap and Weekly Review November 3 – November 7, 2014 is below for your enjoyment!

Monday – Sharon’s is at her house with Phyllis. Phyllis makes a off color remark about Sharon’s wedding ending up just like it is supposed to. Phyllis gives her some line about Nick asking her to bring Sharon to the wedding. Sharon thinks Phyllis is lying. Phyllis tells her to just stop being difficult and there is a big surprise waiting for Sharon. Sharon ask Phyllis what is really going on. Phyllis tells her Nick is giving her a chance to make up for ruining their last wedding. Sharon wants to call Nick but Phyllis won’t let her. Finally Sharon agrees to go with her and they take off.

Austin and Nick are at the Underground. They discuss Summer and how much she loves Nick and still thinks of him as her father. Nick tells Austin he still thinks of her as his daughter. Nick leaves to look for Summer.

Victor gives Summer back her hairbrush. They talk and he tells her he has always thought of her as a Newman. They hug. When Summer leaves the room he double checks the DNA results. Then days it was Summer that Sharon lied about.

Kelly is stressing about Jack. Abby tells her that Phyllis won’t let him go easily. Kelly tells her she won’t either.

Billy tells jack he plans on moving in with Chelsea. Jack tells him he is going to tell Phyllis about Kelly. Billy thinks that’s a bad idea.

Victor shows up and tells Jack they have something important to discuss.

Noah sees Kevin and ask him if he likes Mariah. Kevin tells him they are haut friends. Noah tells him that’s to bad he could see them as a item.

Summer is told by Austin that Nick as looking for her. Summer realizes her phone is gone.

Nick goes home. Noah comes in. No one else is there.

Phyllis tricks Sharon into taking the stairs? On the way up Sharon starts getting flashes of memories back. Phyllis tells Sharon to think hard. Sharon finally remembers.

Billy tells Kelly he thinks she has a chance with Jack.

Tuesday– Nick is looking around for Sharon and ask Noah where she might be. Faith and Mariah show up. Mariah thinks Sharon backed out. Nick doesn’t. Noah wants to look for her. Mariah finds a earring and Nick knows it belongs to Phyllis. Nick takes off. Mariah tells Noah she told Victor what Sharon had been saying in her sleep.

Victor and jack are arguing when Nick shows up screaming for Phyllis. Jack leaves for a minute and Victor shows Nick the DNA test proving Summer is his daughter and then Victor tells him Sharon is the one who changed the results and then she pushed Phyllis down the stairs. Jack returns and Nick ask if he ever had a test to confirm Summer was his daughter. Jack didn’t. Victor finds out where Phyllis and Sharon are.

Dylan is stressing out over the real estate deal. Avery finds out that her ex husband Joe is behind it and that he is buying the whole block.
Lilly informs cane she thinks Hilary is pregnant. When Neil and Hilary arrive Neil confirms that Hilary isn’t pregnant but that they are going to try. Devon joins them.

Joe shows up and he starts talking with Colin.

Hilary says she has to leave for work . Devon shows up and they kiss as they enter a suite. Colin sees everything.

Dylan comes in and punches Joe.

Sharon tells Phyllis she remembers them arguing about Summer. Phyllis tells Sharon that Summer is Nick’s daughter and she has always known it. Sharon them remembers everything else including pushing Phyllis down the stairs. Sharon thinks Phyllis wants to get even. Phyllis tells her she is right. They start fighting over the phone again when Nick,Jack, and Victor show up. Jack ask what on earth this all about. Phyllis ask Sharon if she is going to tell them or should she.

Wednesday– Phyllis tells everything. They leave the stairwell. Victor tells Jack that Summer is Nick’s and gives him the DNA test. Nick and Sharon want Jack to admit it. Sharon says she never meant to hurt anyone but it is true. Phyllis says sharing was getting Summer out of the way by making her Jack’s. Victor actually feels bad for Jack. When they are alone Sharon tells Nick she has tried to tell him dozens of times. Nick tells Sharon to stay far away from him.

Victor returns hime and tells Victoria and Nikki about Summer being Nick’s and how Sharon has been behind everything. Victor tells them they need to make Nick their main priority.

Billy sees a handkerchief and ask Chelsea about it. She says it’s not important but then tells him she took it to the churchntomsayngoodbyntomadammbut then it was returned. Billy wants to burn it but Chelsea says she wants to keep,it for Connor. Billy grabs her and they do it on the couch.

Joe and Dylan are arguing. Paul shows up and after hearing Dylan out he decides he wants to do a background check on Joe.

Jack is looking at Summers pictures and lashes out at Phyllis for not telling him as son as she got back. Jack then realizes Summer doesn’t know. Phyllis says he will have to tell her.

Dylan tells Avery Joe is just trying to make him look bad. Avery tries to cheer him up.

Thursday-Jack is with Summer and he tells her that Nick is really her father. Phyllis explains everything that Sharon did. Jack tells her he is going to miss her. Summer promises she will always be around. After Summer leaves Jack tells Phyllis he needs to be alone.

Michael lies and tells Lauren and Kevin he has a meeting.

Victoria apologizes to Billy for accusing him of having Stitch arrested. She then tells him that Jack isn’t summers father and Nick is.

Kelly and Stitch are talking. They both think they can be happy. Victoria comes in and Stitch tells her he is going to tell her everything she needs to know at dinner that night.

Jack ignores a call from Phyllis. Kelly sees him and walks over to him.

Kevin sees Michael with another woman and confronts him about it. Michael tells him he isn’t cheating on his wife he has cancer.

Nick is taking the cloths off the furniture and he takes off his ring. Summer comes in calls him dad and runs to him to give him a hug.

Friday– Lauren runs into Phyllis who is also looking for Jack.,after Lauren leaves Phyllis finds a engagement ring in Jack’s desk and puts it in. She them finds Kelly’s picture in it.

Victoria and Abby talk about Sharon and what she has done. Victoria then tells Abby that Stitch has something else to tell her.

Jack calls Joe and tells him he isn’t Summer’s father. Jack breaks down and Kelly comforts him.

Summer and Nick discuss Sharon. Summer doesn’t want him himself. When Summer leaves Victoria shows up and they discuss how he and Sharon will handle taking care of Faith.

Sharon tells Noah what happened. After he leaves Nick shows up and tells Sharon that he is taking Faith to live with him.

Kevin argues with Michael about the fact he hasn’t told Lauren yet. Michael says he wants to know everything before he tells her. Lauren show up and claims she knows all,about his appointment and tells him she found a pill in the sink.

Noah is with Summer. When she bad mouths Sharon he goes to defend her but instead he hugs Summer. Kyle calls Summer.