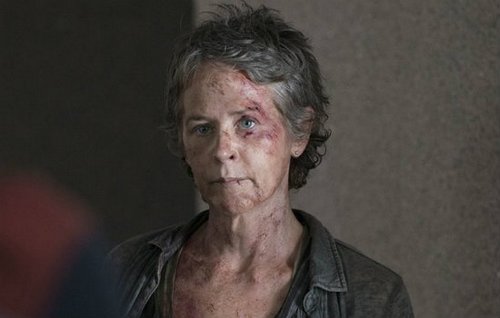 On Season 5, Episode 6 of ‘The Walking Dead’, Carol is sitting in the car right after Rick told her to leave. Carol is crying. A Walker comes up to the car and peers in at her. Carol looks at it tearfully and tells it to leave. Carol drives away. Carol decides to seek shelter at a law office. She looks for Walkers but doesn’t find any. Carol crashes on a couch for the night. When the morning comes we see Carol stop and check out something that is on fire. That something turns out to be the prison after the Governors murderous rampage.

Carol is now in another car with Daryl and they are giving chase to the car Daryl said took Beth. They can’t decide if they should make the car pull over or continue following it. They notice the gas is low. The car in front makes the decision for them and stops. Daryl and Carol watch with great interest as they see two people,get out. One of them puts something in the ground and then gets back in and they take off. Daryl can’t get the car to start again. When they see a bunch of Walkers approaching they have no choice but to leave the car behind and go on foot. Carol tells Daryl she knows a safe place for them to stay for the night. It’s a place where abuses children used to stay. They head into a bedroom. Carol takes the top…..of the bunk beds.

Carol ask Daryl is he has managed to start over yet. Daryl tells her he is trying. Carol still feeling the pain from all she has seen and done tells Daryl she doesn’t think they can save people anymore. Daryl ask why then is she helping him look for Beth. Carol like Daryl says she is trying. They hear some sounds and head off to see what it is. Turns out to just be Walker children. I guess the facility wasn’t that safe after all. Carol goes to the deed but Daryl tells her she doesn’t have to. They go back to bed. When Carol wakes up the next morning she finds Daryl burning the bodies of the Walkers wrapped up in sheets. Carol walks over to him and says thank you. Carol remembers burning Lizzie and Mika’s bodies. They watch the smoke billow up. Must be a nice change for Carol after being with Tyreese .

Daryl and Carol are headed off on their journey. They come up to a large group of Walkers. Daryl decides to burn something like a book and toss it to distract them. It works. They go over a sky bridge. They come across a bunch of Walkers in sleeping bags which I find to be eerily weird. When did a Walker need to sleep or know the difference between being hot or cold? Were they people who were just sleeping when the military came in and did their thing? Anyway they kill them all. Next they are in a office looking around. Carol brings up Lizzie and Mika. She wants to know why Daryl never asked what happened to them. Daryl tells her he knows what happened they aren’t with them. Carol rather cryptically says it is worse than that. Daryl happens to notice a van just sitting there through the office window. They make a stop while Carol takes in a painting she likes. That move buys Noah enough time to hold them at gunpoint and take their weapons including Daryl’s crossbow when they get back on the sky bridge. The nerve of some people’s kids. Noah then lets a bunch of Walkers in a tent loose on them so that he can make his get away. Daryl takes out his knife and starts stabbing the Walkers. They take off after Noah but he is long gone and out of sight. Carol can’t believe that a kid just got the drop on her.

Another flashback occurs here of Carol burning Karens body on the roof. Daryl and Carol circle back around and find the van that Daryl saw outside the office window. They climb inside to check it out and then realize due to all the Walkers coming they are stuck inside of it. So these two decide to hop in front seats, put on their seatbelt’s and Thelma and Louise it over the side. They even hold hands. Both of them are fine in the aftermath of the fall. They leave the van and start walking. Carol tells Daryl that when they first met he was still a boy but now he is a man. Carol tells him she once stayed at the shelter with Sophia. She tells him how everything consumed her. Daryl points out she isn’t ashes yet.

One last flashback and it’s of Carol burning Terminus to the ground. They come face to face with a Walker who has a machete on its body. Daryl grabs it and whacks the Walkers head off. The two look out a window and see the hospital. They hear some noise and head off to see what it is. They see a Walker with a arrow through it then they see Noah fighting with a Walker. Noah sees them and panics. Noah pushes the Walker at Carol. Daryl takes off after him and pins him down with a bookcase. Noah starts pleading with them. Daryl lights a cigarette and acts indifferent. Daryl tells him he saved his ass once he ain’t about to do it again. He also grabs his crossbow. Carol starts pleading with Daryl to help save Noah which it turns out she really didn’t need to do. Before she even has the words out of her mouth Daryl is disposing of Walkers. They get Noah out.

Noah tells them they need to leave like yesterday or the people from the hospital will find them. Daryl ask about Beth. Noah conforms Beth is in the hospital and she is in fact the one who helped him escape. They see a car and they start to take off running. Carol gets slammed by it. They load her up and take her. Darryl is fighting with Noah to get loose. Noah tells him in a frightened voice that there are a lot of people at the hospital and they have guns. Darryl tells Noah he has people as well.

Daryl has lit a garbage can on fire to distract the Walkers. Daryl and Noah sneak behind it and then take off running through a broken gate. Next Daryl slams through the gate in a truck he has found. Daryl is completely silent just driving back to where Rick is. He looks like he might break down any second. Noah is looking over at Daryl probably wondering what he has gotten himself into.