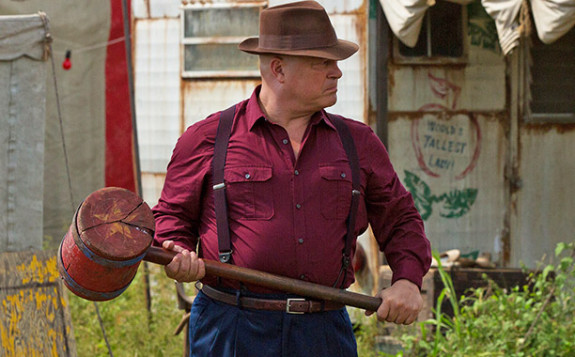 Jimmy goes to 2.0’s house to see the girls. 2.0’s mom assures him that Dot and Bette are free to leave whenever they want. Jimmy ask the girls if that’s true. Bette says they are happy and there is absolutely no reason for them to leave. Dot stays quiet and looks sad. Jimmy gets down at eye level and tells them they need to,come back so they can be with people who care about them. Bette pipes up and tells Jimmy that Dandy is the one who really saved the kids from the killer clown not Jimmy. It slowly begins to dawn on Jimmy just exactly who Dandy really is.

Jimmy says rather calmly to Dot and Bette that they need to come with him now. Dandy says he doesn’t give the orders in his house. Dandy tells Dot he knows she is having mixed feelings because she wants a surgery he would never allow. Jimmy says because he would never cut a girl in half right. Dandy tells him to shut it and stop ruining everything. Dot ask how he knows about the surgery. Dandy tells her he told her there are no secrets. Dot wants to leave. Dandy points out she can’t go without Bette and Bette is in love with him. Ewwwww. Jimmy tells him his mother said they can go whenever they want. Bette tells Dandy she is sorry but she will always pick her sister and that they have to go. Jimmy takes Dot by the hand and walks them out. 2.0 has the look of murder on his face.

Jimmy is rehearsing a song he intends to sing. Come as you are by Nirvana. Again I digress. Paul is lays up in bed. Not sure if he is going to make it or not. Dell is at the bar looking for Andy. The bartender says something that pisses him off and Dell nails him in the head with his beer bottle slams it into the bar for good measure and then takes off as the guy falls to the floor. Stanley is watching the whole thing from a booth with a smile on his face. Elsa naturally doesn’t like it. Jimmy tells her that’s to bad because that’s the song he picked and he is sticking with it. Elsa scolds him and tells him he better remember who it is he is talking to. Jimmy assures he knows exactly who he is talking to. A liar. Jimmy then tells Elsa he knows exactly what she is with the twins. Surprisingly the twins defend her and say they would love to come back if Elsa will have them that is. Elsa tells them that she will of course take them back and they can have whatever they want.

Desiree helps Ethel to,see her doctor. When they arrive they see a closed for business note in the door. Desiree opens the door and goes in. The doctors daughter tells,them that her father smashed his hands before blowing his brains out and it’s all their fault. She calls them freaks and tells them to get out. They leave in a hurry.

Stanley is playing with the strong mans toys. When Dell comes by he manages to piss him off. I honestly have never seen a gay man this angry. Stanley brings up the bar and tells Dell he saw him there. Maggie stops Dell from nailing Stanley I with the hammer. Stanley tells her they are going in to,chit chat in the tent. Maggie walks off. Stanley blackmails him into killing a freak for him. Stanley wants him to bring the body to a barn. He gives Dell one day.

Jimmy is all snuggled up in bed with Maggie. Jimmy tells her the whole deal with the twins is really bothering him. Maggie tells him it’s just another sign that they need to leave. In fact she is willing to pack up and go that very minute in the middle of the night. Jimmy tells her he can’t just yet and Maggie tries to,guilt him into it by telling him he is just trying to get out of it. Jimmy says that couldn’t be farther for the truth he just needs a few more days to take care of some things. Maggie isn’t buying what Jimmy is selling.

Dell gets blotto and attempts to kill Amazon Eve of all people. She bites him and then proceeds to beat the shit out of him and throw him out of her tent. She ask him who the strong man is now before she slams her door.

Amazon Eve is with Ethel and Jimmy. She tells them everything that happened. Jimmy wants to get the cops. Ethel looks at him like he has grown two heads. Ethel says it’s their problem and they will fix it. She says they will sneak into his trailer and kill him. Jimmy says we are going to do what now. Ethel gives Jimmy a speech about hope and how it’s a empty promise. Jimmy tells her he will take care of Dell. She tells Jimmy if he doesn’t they will.

Dell is ragging on somebody about being weak. He sees Stanley watching him. Jimmy walks over and tells him he needs to talk with him man to man. Dell tells him to let him know when the other man shows up. Jimmy says they can’t talk there. Dell says ok they can go into town and Jimmy can buy him a drink. All the while Stanley is watching.

Elsa does a shot with the twins. Then ask them what they want in exchange for the fairy tale they told. Elsa ask if they want to go to Hollywood. Nope turns out they want much more than that like Bette wants to be a comedian and have caviar for breakfast. She also wants blonde hair and twenty percent of the box office off the top. Elsa tells them they can have it when she is Hollywood. Bette tells her they want it now and the money she got from Dandy’s mom when she sold them. Elsa says they are blackmailing her. She ask Dot what she wants. Dot wants fifty percent of the box office.

Dell tries to get Jimmy to partake in more than one shot. Jimmy refuses so Dell ask him what he wants. Jimmy tells him the women of the freak show are about to string him up by his balls. Dell tells him Amazon Eve is crazy. Jimmy does another shot. Jimmy tells him he won’t miss him when he is gone. Jimmy tells him a story about making a rabbit coat for Ma Petite and then tells Dell how much he loves her. They do some more shots. Jimmy runs outside and starts throwing up. Dell picks up a brick and thinks about killing him. Jimmy turns around and tells Dell he knows he is his father. Dell tells him it’s true. Dell hugs Jimmy and they leave to head back home.

Come morning Jimmy and Dell are back at camp drunk off their butts singing as loud as they can. Elsa hears them and comes out raging for them to be quiet. Desiree advises Jimmy not to let Dell become a influence in him. Dell gets upset ans yells out that Jimmy is his son. Elsa isn’t impressed and pretty much says good for you now shut up.

Penny goes home and tells her father she is going back to the freak show to stay with Paul for good. As a going away present her father gives her face tattoos and a forked tongue.

Bette gets her blonde hair. Dot refuses to do the same. Elsa tells them to let her know of there is anything else they need. On her way out she hands Dot a note. Elsa’s note says if Dot will tell her want she wants she can help her get it. Dot returns a note saying she wants a surgery that will separate her from Bette.

Stanley is with Elsa discussing the blackmailing twins. Ethel walks in with her dessert and hears him suggest that they kill the girls.

Dell brings Ma Petite a gift. She tries it,on and then comes back. Dell picks her up to hug her and ends up pressing her face into his shoulder to suffocate her. When she starts to fight him he breaks her neck. Then he sadly holds her body.

Penny comes back to Paul. He becomes upset when he sees her and says it’s his fault. Paul hugs her.

Meanwhile at the museum they are having a little party. The owner uncovers a glass case. It’s Ma Petite.