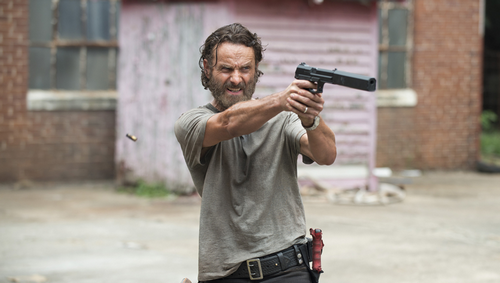 Here is your review of ‘The Walking Dead’ Season 5 Episode 7 “Crossed”:

Sasha is wielding a axe and whacking a bench in the church. Whatever it takes girl whatever it takes. Daryl and Tyreese are standing off to the side. Tyreese lets Daryl know he should thank his lucky stars he wasn’t around when Bob died. Gabriel ask them if they plan on taking everything. Daryl says they will take whatever they feel they need. While they are Walker proofing the church Rick tells Michonne there is no way he can leave Carl and Judith to head to Atlanta. Michonne tells him she can take this one seeing as how she owes him one. Then Rick changes his mind and decides he will go. He hugs Carl and away they go by they I mean Tyreese, Sasha, Daryl, Noah, and Rick. Michonne, Carl, Judith, and Gabriel are left behind at the church.

Gabriel is walking around the church when he sees a bloodstain on the floor. Gs file tries to scrape it off but it doesn’t come up and then he gets eight shades of OCD. Gabriel spits in his hand and tries to get it off that way.

Tyreese tells Sasha he understands where she is coming from. Sasha tells him she doesn’t want to talk about Bob.

Beth meanwhile is mopping the floors of the hospital. Beth wants to know about Carol and Steve tells her he is going to check in on her.

Glenn is wondering what they should do about Eugene since he hasn’t waken up yet. Rosita tries to give Abraham some water. Abraham smacks it out of her hand. Rosita demands that he look at her. Abraham stands up. Maggie has had about enough and tells Abraham to sit back down. When he doesn’t she tells him if he doesn’t she will put him down. After a few more tense seconds Abraham drops down to his knees.

Rick and company are coming up with a plan to get Beth and Carol. Rick pretty much wants to go with the fire now ask questions later if anyone survives method. Tyreese would just prefer they capture some guys and them use them as leverage to get Carol and Beth back. Daryl is 150% down with that plan and so Rick allows it.

Back over at the church Gabriel is still on a OCD trip. He is scrubbing the floors of the church. Carl walks up to him and suggest he pick a weapon to defend himself. Carl then says he will teach him how to protect himself. Gabriel picks a machete but declines Carl’s help saying he is going to lay down.

Dawn is bitching about the fact no one has found Noah yet. One of her guards tells her that Carol is wasting resources and the machines need to be turned off. Berth becomes irate and walks over and gives the guard her two cents. Dawn takes the guards side and tells him to have the machines removed. When the guard is gone Dawn tells Beth it is her fault that she will die. Then she kind of does a 180 and tells Beth to save her and gives her keys to the drug closet.

Tara tells Glenn that he can’t stay mad at Eugene for using the only thing he had to save him. Glenn tells her damn right he can.

Maggie meanwhile is trying to make a little tent for Eugene who is still unconscious. Maggie then goes to Abraham and tells him to get over himself. That they have lost something or someone important to them.

Beth goes to see Steve and ask what medicine he would use for Carol. Steve tells her and then tells her that Dawn never does anything out of kindness. Steve wishes her luck with helping Carol.

Glenn is trying to get some water but it’s really dirty. Rosita rips off a piece of her shirt to filter it through. Fun fact Eugene taught her how to do it. Tara ask Rosita if she has always been with Rosita. Rosita tells her she met him in Dallas and he asked her to come with. Glenn notices something move in the water.

Noah gets chased down by some cops. They get him down and cuff him. One says he thought Noah was smarter. When Rick and company come out they realize Noah was smarter than that. Rick has them out their guns down. Another car comes by and starts shooting at everybody. They grab the two cops Rick was holding and they take off. Daryl starts looking for people to grab. A cop grabs Daryl and throws him to the ground. Daryl clearly being the father of invention grabs a rotting Walkers by its eye sockets and starts beating the hell out of the cop with it. Rick runs over and the cop has no choice but to give up. Rick has murder in his eyes and it takes a talk from Daryl about three being better than two to snap him out of it.

The cops let the group know that Dawn could careless about them and they are not a bargaining chip. They tell the cops they will just have to take care of Dawn themselves. Which I’m sure Rick is counting down the minutes to. A cop named Bob of all things (more in hat in a bit) wants a peaceful resolution and tells them he will work with them to find it.

Glenn and Tara and Rosita kill a few Walkers and then take some of their clothes to make a fishing net. Tara comes across a bag pack. She tells them they will never believe what she found in it. It’s a yo-yo.

Michonne goes to check on Gabriel and gives him a pep talk where she explains sometimes good people have to do bad things. She tells him what they do is worth it. Gabriel gets snippy and tells her he took the machete. Michonne tells him she is just trying to help. Gabriel shuts the door in her face. Gabriel then goes back over to the floor where he has been using the machete to remove the floorboards.

Beth give someone some strawberries to pretend they are sick so she can get the medicine she needs for Carol. The plan works. Once she gets it she heads into Carol’s room and gives it to her. Beth sits and holds her hand and waits.

Tyreese is with Sasha and they have a sweet moment where Tyreese tells her to be thankful she got to say goodbye to Bob because he didn’t get that chance with Karen. Sasha tells him she should have been the one to kill Bob. Tyreese tells her it’s ok that she needed help. They hug each other.

Gabriel gets out of the church. I don’t know why he went to such extremes to do it. I’m pretty sure he could have walked out the front door. Gabriel steps on a nail. He pulls it and continues to walk.

The cop ask Rick for some water and he tells him he will get it for him. The guy tells Rick his name is Bob.

Gabriel is in the woods when a Walker comes out of nowhere. It attacks him. Gabriel manages to throw it off of him and push it to the ground. Gabriel picks up a rock to bash it’s head in but sees the cross around its neck and can’t. He throws the rock to the ground instead. Gabriel continues on his way.

Bob the cop tells Sasha about a friend of his named Tyler. He tells her he is out there and is a Walker. Sasha tells him she will help he just needs to show her where his friend is.

Maggie gives Abraham some water. Maggie asks him if he really wanted her to shoot him. Abraham tells her that at first he thought he did but turns out he didn’t. Eugene begins to stir and Maggie heads over to see how he is doing. Abraham drinks some water.

Cop Bob leads Sasha to a window and tells her his friend is out there and he can see him. When Sasha goes to the window to look for herself Bob bands her head into the wall knocking her out cold. Cop Bob takes off running.