The Young and The Restless Recap and Weekly Review November 17 – November 21, 2014 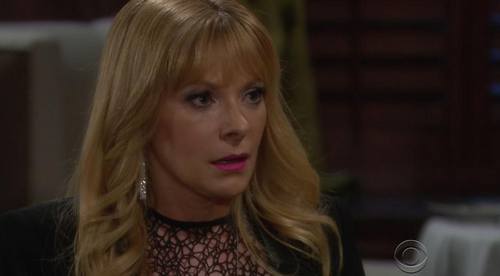 The Young and The Restless Recap and Weekly Review November 3 – November 7, 2014 is below for your enjoyment! – See more at: Hollywood Hiccups YA Recaps…

Monday-Ben and Billy are trying to figure out where Victoria might be by figuring out where she isn’t. Billy is ticked at Ben for not stepping up when she didn’t show up for there date the previous night. Ben tells Billy his mom had a heart attack. Meanwhile Victoria is having some serious contractions in the closet. Ben and Billy go back to the parking garage and Ben calls her phone. They hear it ringing. They find Victoria. She tells them both that the little one is in the way. Ben calls 911. Billy gets some medical supplies. Billy and Ben work together to help Victoria deliver a little girl.

Chelsea is trying to get Jeff to drop his lawsuit. Jeff tells her at least Adam was clear on who he loved. Chelsea promises a even better deal if he will drop it. Jeff aligns and tells her he will get back to her.

Adam is talking with Connie Falconeri sorry I mean Sage about how his face will be unrecognized by anyone. Constance comes in to see her grandson. When they are eating Adam mistakingly puts the spinach to the side. Constance says that has always been his favorite. Adam pretends like it’s the pain medication. After Constance leaves they talk about how risky this is. Adam reminds Safe she is getting something out if this as well.

Phyllis gets into it with Summer. Summer tells her she is just as mad at her as she is Sharon. After a few more rounds they make up. When Phyllis leaves Summer starts to feel guilty about keeping Jack and Kelly a secret from Phyllis.

Jack tells Phyllis he still wants to marry her. They kiss and then go upstairs and have sex. Afterwards Phyllis ask what he did while she was gone. Phyllis ask if he was with anyone else. Jack at first denies it but then admits it. Phyllis tells him if she ever found out who it was she would kill her.

Tuesday- Victoria thanks Ben and Billy. They are talking when Victoria almost passes out. A doctor comes in and says she needs some rest. Victoria wants to talk to Ben alone. Victoria tells him his she came to be in the closet and he realizes it was his mother who did it.

Abby and Billy get into it about Chelsea and he leaves.

Kelly gets a voicemail from Jack while at the hospitals to see her mother.

Hilary cancels Jack’s trip to Chicago. Neil comes in and they talk about how hot his wife Hilary is and then talk turns to Phyllis. Jack tells Neil he had decided in Phyllis. Neil ask about Kelly. Jack says this is going to rip her heart out. Neil tells him not to put it off. Jelly calls Jack and tells him her mom had a heart attack. Jack says he is on his way.

Colin lets Devon know he knows he is banging Hilary behind his fathers back. Colin tells Devon he will keep,quiet if he gives him two million dollars. When Neil shows up he talks with Colin which makes Devon nervous. Colin doesn’t say anything. Colin then tells Devon he wants two million cash by tomorrow.

When Jack gets to the the hospital he runs into Billy who tells him Victoria had the baby.

Ben is telling Kelly about their mother locking Victoria in the closet.
When Kelly sees Jack she runs to him.
Nikki gets home and switches the empty vodka bottle with a new one. I still don’t get why there is even alcohol in the house. Victor comes in and she panics. Victor tells her they need to get back in track and hugs her. Abby comes in to tell them Victoria had the baby.

Nikki and Victor are talking to Victoria on the phone. They plan to see the baby the next day. When she gets off the phone she thanks Billy for not playing twenty questions with her. The Doctor arrives to give Victoria the baby for a feeding.

Ben and Billy decide they both will stay with Victoria.

Kelly ask Jack about Phyllis. Before he can answer the doctor tells her that her mother is awake and that she can see her.

Wednesday- Sharon and a wry get into it about Nick and missed opportunities. Avery thinksmsharommismgettimgmexactlynehatbshe deserves. Avery tells Sharon she has given her more than enough to make sure Nick wins the case and gets custody of Faith.

Dylan and Nick make plans to go see Victoria and her baby together. Mariah comes in and tells Nick she heard about what Sharon did. Nick tells her she doesn’t have to pick sides. Mariah tells him that she will.

Joe runs into Lauren and misunderstands him until he tells her they have a meeting.

Kevin is waiting for Michael at his doctors appointment and Michael is not happy about it. When the doctor takes Michael back he ask him what he can tell him the doctor says he needs more information in order to say. The doctor does tell,him however that the cancer has passed stage one and treatment will be needed. They will of mire test to see where it has spread.

Avery tells Nick about Sharon paying her a visit. They discuss the best way to handle the situation. Avery then tells,him about joe going after Dylan because of her. Avery tells him she has a plan. When nick leaves Joe shows up. Joe tells her he is just there to see Michael and tells Avery to tell him he stopped by.

Sharon and Dylan run into each other. Dylan tells her he doesn’t hate her and understands why she did it. When Sharon is alone looking at picture of Faith on her phone Nick shows up. She ties to convince Nick they still have a chance. Nick tells her she is sick and leaves her standing there in tears.

Kevin sits down with Mariah and tries to cheer her up about her family situation. Mariah brings up reading. Anew fantasy series online and tells Kevin how much she loves it. Kevin feigns interest. Mariah gets him to check it out but he acts unimpressed. After Mariah leaves it turns out that Kevin is the one writing it.

Sharon calls a lawyer to represent her in the custody case.

Michael and Lauren meet for lunch. Michael distracts her with flirting and sweet talk leaving Lauren in the dark still.

Dylan hears Avery ask Joe about the kiss. Dylan and Avery argue about why she never told him. Avery says it’s because she didn’t want Dylan punching him again.

Nick is pouring a drink when someone comes in. Nick ask what they are doing there.

Dylan finds Joe and tells him it’s now personal for him as well.

Thursday- It’s Grace that Nick was talking to. She tells she came to see if she could help him. They end up kissing and pretty soon they are half dressed. Nick comes to,his senses though and stops. He tells Grace he has to break his pattern. . Grace wished he had realized that after sex. Grace tells him she will look him up in ten years. She kisses him. Grace tells him none of the women in his life plan on going anywhere. Nick tells her maybe he should then.

Billy opens the door to Jill. She tells him he has a right to know if Victoria’s baby is his or not.

Ben chews his mom for what she did to Victoria. She tells him she just needed time to think.

Victor and Nikki are visiting with Victoria.

Ben tells Victor what his mother did.

Nick tells Victoria to find out who the baby’s father is. Victoria tells him to,go,get her doctor.

Devon pays Colin off. Lily calls Devon over and when she gets up to leave he tells Hilary he payed Colin off to keep their secret.

Jill shows up,with a cop,just as Colin is laying Kurtz. Colin claims he doesn’t know him and he is carted off. Jill ask where he got the money. Colon tells her a investment he made saw a profit.

Victor and Nikki toast to a happy day. He with champagne and her with cider.

Friday- Nick tells Victor he came by to say goodbye. Victor tells him he thinks he is running. Noah tells him he should have done a DNA test on Summer a long time ago. Nick tells Noah he is sorry. Nick hugs Victor and Noah. They promise to watch the girls and the club while he is away.

Ashley comes by Chelsea’s to tell,Billy he is foolish himself if he thinks he will ever be happy with anyone but Victoria. When Ashley leaves Chelsea ask Billy if things will,change if he turns out to be Victorias babies father. If this babies DNA test doesn’t get changed I will be surprised.

Phyllis tells Jack she invited friends and family over for a engagement party. Jack tells her he doesn’t like it. Turns out no one can stay some is off the hook anyway. Track takes Phyllis to see some roses. Ashley tells him he needs to tell Kelly like yesterday.

Kelly is looking at a picture of her and Jack. Lily shows up to,go,over a wedding reception with her. Lily thinks Jack will pick Kelly. They joke about Phyllis coming after her. After Lilly leaves Jack appears and tells Kelly they need to talk.

Everyone gets into at Victors but he is still sure that everyone will come for Thanksgiving.

Adam is trying to lift weights when he falls down. Safe tells him to slow down. Adam tells,her he needs to go. Constance comes in and ask what he is talking about. Safe takes Constance out and comes back. Safe is afraid Constance is going to learn the truth. Adam tell her he isn’t going to,hurt her but he can’t stay there either. Constance comes back in with a book he doesn’t recognize and a dog who doesn’t like him. Which is bad because her grandson was buddies with that dog.

A dog comes to visit Nick at the cabin.

Summer assures Austin she is glad she didn’t know about her parents back in the day or she would have ended up with Kyle instead if him. She kisses him and hugs him but the look on her face says she wonders.