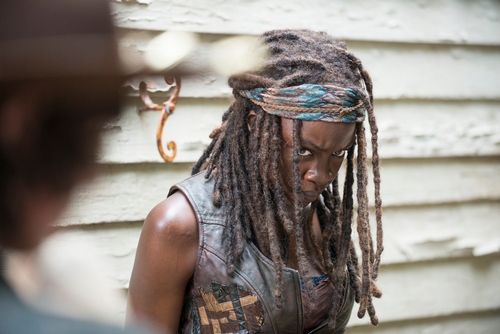 Here is your review of ‘The Walking Dead‘ Season 5 Episode 8 Mid-Season finale, “Coda.”

Coda- (Italian for “tail”, plural code) is a term used in music in a number of different senses, primarily to designate a passage that brings a piece (or a movement) to an end.

Cop Bob is running trying to undo his hands. Rick jumps into a police car and catches up to him. Rick tell him to stop but he keeps running and so Rick does what naturally comes next he runs him over. Bob begs Rick for help and tells him he broke his spine. Rick walks over to him and shoots him right in his head.

Gabriel is outside the school where Gareth and company were. Walkers are just a mere few feet away locked inside a building. Gabriel is looking for things he can use in his journey. He comes across a Bible with the name Mary B written in it which was Gareth’s mom so clearly this is his Bible. He also finds what’s left of Bob’s leg on the grill. Gabriel becomes upset and starts tearing things down as he cries. The Walkers manage to break out and they come right at Gabriel with out collecting their two hundred dollars.

Gabriel takes off but is moving somewhat slowly you know bad leg and what not. Gabriel finds a tree and leans on it to hide. Gabriel manages to make it to the church but it is surrounded by Walkers. What to do, what to do. Gabriel starts yelling for help. Wouldn’t it have been something if they just left him out there to get eaten? Karma served. Carl hears him and attempts to save him but can’t get the door open. Michonne helps him with that by chopping the barricade away.

They get Gabriel and a bunch of Walkers for their trouble. Gabriel leads them to the hole he hacked into his floor and holds the door shut with a chair while they go through it. Gabriel lets the chair go and hustles over and down the hole himself. Carl and Michonne run around and lock the remainder of the Walkers in the church. Gabriel who apparently has something in common with Rip Van Winkle finally wakes up and realizes he can’t out run Walkers or the current situation.

Rick heads over to Daryl and gives him the oops my bad speech. You know the one where he explains why he just had to kill that guy. Daryl tells him no worries Dawn didn’t like him anyway. The cops are pretty much playing the part of didn’t see anything didn’t hear anything guess the Walkers got him such a shame. Rick ask them if they want to live. Indeed they do and they tell Rick they will do whatever he ask to make sure this is the case.

Beth is with Dawn. Beth ask about the man in the picture with her. Dawn tell her the guy was her friend and that she misses him. Beth wants to know what happened to to him. Dawn just says that he risked his life.

Michonne and Carl are standing outside the church of Walkers. Carl ask Gabriel just where in the hell he went. Gabriel tells Carl he went to the school. Before Carl can give him the slap he so richly deserves Walkers start to break free. Then like magic Abraham and company show up. He blocks the door with the fire truck. Glenn explains to Michonne that it turns out that much like the rest of them Eugene is also a lying liar who lies at times. Glenn ask where everyone else is at. Michonne happily tells Maggie that they went to get Beth. Maggie who suddenly remembers she in fact does have a sister decides she should be part of the rescue team.

Beth sees one of Dawns underlings throwing his weight and some poor old man around. He goes to grab Beth but Dawn stops him by saying she needs Beth’s help. Next we see Beth sitting on the elevator shaft. Dawn ask her if she plans to jump. Beth tells her she just wanted to be alone. Dawn tells Beth she has no intentions of letting her go anywhere. Beth points out to Dawn she won’t be going anywhere either. Dawn reminds Beth she has saved her not once but twice and that their is always a right way to do things. A underling comes in and demands answers from Dawn. The underling tells her it’s a time for a changing of the guard. Dawn pulls out her gun. The underling tells her to put it down. Dawn tells Beth to get out of the way. Dawn brings up how he beat up a old man and raped a girl. Dawn tells him she has had enough and it’s going to stop. The underling rushes her and they start fighting. Dawn ends up getting the life choked out of her. Beth rushes to her rescue and when the Dawn manages to get free Beth pushes him down the elevator shaft. Dawn tells Beth thank you. Guess Beth did things the right way.

Tyreese and Sasha are on sniper duty. Guns ready and aimed in the direction of where the switch is to happen. Tyreese tells Sasha he wonders what happened to them. Daryl relieves Tyreese. Rick is at the meeting place waiting for someone to come. Two cops show up and Rick walks over to them. Rick lets them know who he is and that before this world went the way of the Walkers he was a deputy. They want him to put his gun down. He does. Rick tells them that they have to of his people tucked away inside the hospital and he likewise has two of theirs. Rick wants to make a trade. They ask Rick about Noah and he conforms that he is with them. Sasha shoots a Walker. Rick lets them know he has people close and they are very good shots. Rick says he will will radio them again in ten minutes.

Rick is inside the hospital and he has the two cops with him. Beth being sneaky hides scissors in her cast. Rick is led to Beth and Carol who are being held by a bunch of officers. Carol is awake might I add. They put their guns away. Rick tells his team to out their guns down as well. They do so reluctantly. The trade begins. Rick gives Dawn a officer and she gives him carol. Rick grabs the other officer and dawn grabs Beth. Dawn tells Rick she is glad they could work things out and all she needs now is Noah and they can be on their merry way. Rick walks right up to Dawn and tells her hell no Noah wasn’t part of their deal.

Dawn explains that when Noah left Beth took his place so, in order to get Beth she needs Noah. Daryl pops up and says that Noah has no desire to come back and be with Dawn. Noah tells Daryl it’s okay. Rick says hell no it isn’t okay. Beth is in agreement with Rick. Noah keeps insisting he will go back. Beth walks over to Noah and gives him a hug. Noah tells Beth he will go back so she can be free. Beth walks over to Dawn and tells her she understands what Dawn has been trying to tell her. Beth stabs Dawn with the scissors. Dawn shoots Beth point blank in the head. Rick is too shocked to do what comes next so Daryl drops Dawn like the bad habit she is. Pretty soon everyone is holding a gun. One of the cops puts a stop to more violence by saying it’s over. They offer to let Rick and company stay with them at the hospital. Rick declines the offer but says anyone who wants to come with him is more than welcome.

Just as Rick is coming out of the hospital Abraham shows up with Maggie. Rick just shakes his head. Maggie sees a devastated and crying Daryl carrying Beth’s body and falls to the ground screaming no and crying hysterically.

Morgan enters the now abandoned church. He walks up,to the alter. He touches the cross. He lights a candle and lays out a candy, rabbits foot, and a bullet. He bows his head and says a prayer. When he looks up he has tears on his face. Morgan smiles and laughs as he stand up and turns to leave. Morgan notices a map on the floor and picks it up. He sees the message Abraham wrote about needing a Rick Grimes in Washington. Morgans eyes register shock.