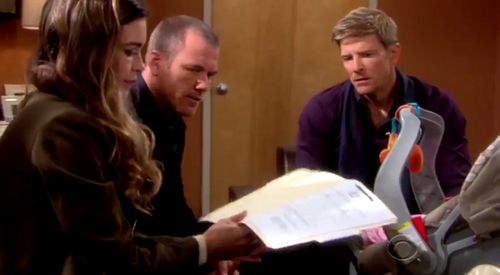 The Young and the Restless Recap and Weekly Review for November 24 – November 28, 2014 is below for your enjoyment!

Monday- Billy tells Chelsea that nothing will change between them if the baby is his. Victoria calls and ask him to come and give some DNA. Chelsea wants to come along and Billy says she can. When she leaves the room Billy sighs.

Constance is confused as to why Gabriel’s own dog would bark at him. Constance assumes it’s because he looks different in the outside and the dog doesn’t recognize him. When Constance leaves Adam and safe argue some more. Adam takes a nap and yells out Chelsea’s name. Safe comes to check in him ad does Constance. Constance ask who Chelsea is. Safe covers and says it’s where Gabriel loved when he was abroad. When he is alone again Adam looks up Chelsea on the internet.

Ben goes to see Victoria and see if his mother turned up there. She hasn’t. Victoria tells him she needs some of his DNA. She talk about hi smother letting him take the fall,for his fathers death. Ben tells her he needed her to know. Victoria thanks him for his honesty. When Billy comes in with Chelsea Ben leaves. Chelsea and Victoria end up alone. Chelsea tells her the baby will always be welcome if she is Billy’s and she tells Victoria how much she loves Billy. After the DNA is taken and everyone is gone Victoria looks at the baby and wonders if she has Ben’s or Billy’s eyes.

Devon is making out with Hilary in Jack’s office. Phyllis comes in and notices the light on and walks in. She almost catches them but they pretend they were just talking. Devon introduces Phyllis to Hilary. After she leaves Hilary states that it was to close of a call,but still they kiss some more. They talk about how one day they won’t have to sneak around. Hilary tells Devon she will pick his pretend girlfriend for Lily’s Thanksgiving get together. They part ways so Hilary can go home to Neil.

Jack is trying to Kelly about Phyllis but before he can Phyllis walks in and tells her that her and Jack are getting married. Phyllis wants Kelly to plan the wedding. Ben comes in and tells Kelly their mother disappeared from the hospital. Jack offers to,help find her. Kelly shuts him down. Phyllis and Jack leave. Ben tells Kelly it was their mom who killed their father not him. Kelly starts,crying and says her mother is selfish. Ben ask if they should look for her. Kelly tells Ben they need to start living their own lives. Ben ask her what’s wrong. Kelly won’t tell him.

Jack snaps at Phyllis when they get home about the way she went on at Kelly. Phyllis ask if he still wants to marry her. Jack says yes she makes him feel,more alive than anyone. They head upstairs.

Billy is stressing out and Chelsea gives him a back rub that turns into kissing.

Tuesday- Nick is chopping wood three sheets to the wind and still taking sips from a bottle. He thinks about Sharon which always ends badly. The dog reappears and he takes him inside the cabin. Nick finds a old bottle of alcohol and when he taste it he says it’s like paint thinner. He and the dog head back out and he complains about how screwed up his life is.

Back inside Nick gets visited by the ghost of lovers past starting with Amy Wilson. Nick tells her she was his first love. She tells him he is sweet like Cotton Candy. Grace is next and she tells him his she is always there to pick up the pieces. Nick agrees she always has a way of showing up when he isn’t thinking clearly. Grace ask him why he was so willing to cheat on Sharon. Nick thinks maybe he was just trying to prove something to his father. Sharon appears and says it was love.

Nick heads out and tells the dog it’s like they all are really there. He hears sometime and goes back in the cabin. Phyllis is there playing video games. Nick wonders what went wrong with them. Phyllis says love is like a merry go round. Avery shows up next and tells Nick he is on trial and court is in session. All his past flings are sitting there now. Aver accuses him of breaking their hearts by lying about loving them. It all comes down to all of them being hurt by him because he has always been obsessed with Sharon. Avery then calls Sharon as her star witness.

Back outside Nick is drinking a beer. Sharon shows up. Nick tells her he has made a lot of mistakes. Sharon tells him he is just human. Nick brings up all,the secrets Sharon has kept for him over the years. Sharon wants Nick to forgive her. Nick tells Sharon he is done with women.

He goes back inside and his mother is there. She tells him when you love someone to much it can hurt. Nikki tells him she did warn him about Sharon. Nikki then reminds him of the joy he has experienced even with the pain. Nick flashes back to moments with each of the women. Nick tells her all,of his relationships crashed and burned. Nikki says every one.

Outside Summer and Faith are playing. Mariah appears. Mariah thinks he should give up on women. Summer says her dad believes in love. Nick tells her it isn’t always that easy. All of the women show up and tell Nick he shouldn’t give up on love. Nick yells that he is done. Nick wakes up and he and the dog head outside. Nick goes down. He is stuck in a trap.

Wednesday- Nikki is looking at all the alcohol when Victor comes in. Victor tells her he is going to be missing some people for Thanksgiving. Faith comes running in with sharing right behind her. Victor makes it clear she is no to stay. Nikki tells her they will keep faith safe from her and what she has done. Paul and Christine show up and when Christine is asked if she wants wine she declines saying she may be with child. Dylan and Avery show up. Dylan is playing with Faith while Avery is getting text from Joe. Nikki makes a toast to,Dylan saying how happy she is to be his mothers Victor says cheers and clinks Dylan’s glass.

Victoria is at the hospital. With Abby arrives she bad mouths Ben. Victoria tells her to stop since Ben isn’t the one who killed his father.

Ashley ask Ben if he wants the day off to spend with his family. Ben tells her his mother is AWOL. Ashley brings up Phyllis and Jack’s engagement. Ben can’t believe it. Ashley invites him to have Thanksgiving with her. Ben tells her no thanks. He gets a call.

Nick is screaming in pain. Then he falls.

Over at Neil’s they are also celebrating. Hilary tells Colin to leave Devon alone. Jill sees this and ask Colin what’s going on. Everyone else is talking about meeting Devon’s “girlfriend”. Lily thinks Neil is putting on a act. Before they eat Neil tells everyone how grateful he is for them.

Jack calls Kelly and leaves a message telling her he wants to apologize. Phyllis walks in and Jack gifts her with the turkey wish bone from last year that he glued back together. He and Summer used it to wish that Phyllis would come back.

Noah and Mariah are joined by Sharon. Noah tells her they don’t want her spending thanksgiving by herself. Club sandwiches it is. Sharon tells the. That is Nick is going to try and get full custody of Faith. Sharon tells them she isn’t going to let that happen.

Billy is about to paint with the boys when he also gets a call.

Victoria shows up at Victors with the baby. Victoria ask if she can stay the night. Everyone wants to see the baby. Victoria says she named the baby Katie which is short for Katherine. Nikki starts crying. Victoria tells her that was the only name for the baby. She gets a call the DNA test will be there in the morning.