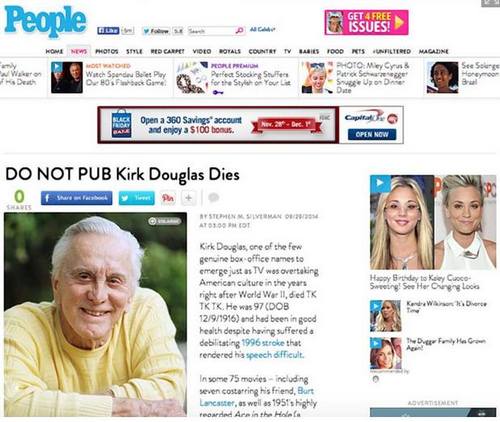 Kirk Douglas died, according to an article People prematurely published. Usually death hoaxes begin was some bored troll on a social media network, but this obituary was an accident.

It may (or may not) be a surprise, but media outlets have an inventory of posts ready to be quickly altered and published in order to get the scoop. It’s a common practice, but someone accidentally published this shelved story.

Editors were scrambling to remove the post, but it was too late. Other outlets noticed the story and was already being shared on Twitter and Facebook.

The story, titled “DO NOT PUB Kirk Douglas Dies” was timestamped for Sept. 29, 2014. Kirk Douglas, one of the few genuine box-office names to emerge just as TV was overtaking American culture in the years right after World War II, died TK TK TK,” the post stated. “He was 97 (DOB 12/9/1916) and had been in good health despite having suffered a debilitating 1996 stroke that rendered his speech difficult.“

Alas, Kirk Douglas is still alive and is looking forward to his 98th birthday next week.

He actually has an upcoming feature on USA Today. He will be pimping his new work of poetry, ‘Life Could Be Verse‘. Kirk will also share details on his life, fatherhood, and completing nearly 100 films.