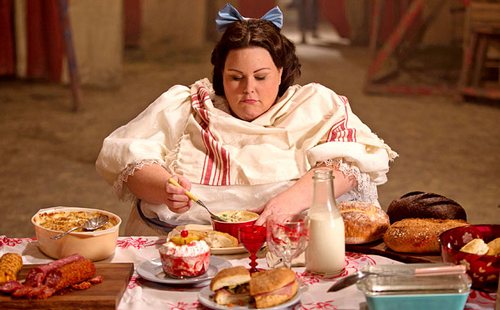 Here is your review of Season 4 Episode 8 “Blood Bath” of American Horror Story:

Gloria is smoking. She is talking with a shrink. She flat out says she won’t have her son committed. Gloria is telling him all about Dandy and how he gets his craziness honest. We even get to see all the crazy shit he was doing before now like killing animals and having private time with the gardeners son. Gloria says that he went “missing” years ago. The shrink tells Gloria that he would very much like to meet with Dandy. Gloria tells him that her little fruit cake will never agree to it. The shrink insist that he gets to meet with him.

Everyone is out looking for sweet little Ma Petite. Even Dell. They search and search and in the end all they find is her little ripped up dress. When they give the dress to Elsa she becomes very upset and starts crying. Dell suggest a animal did it. If by animal he is referring to himself then I suppose he would be correct. Ethel gives a crying Elsa the evil eye. Why is she so upset is the question? Because Ma Petite is missing? Or the money she will be losing?

Later while Elsa is in her tent Ethel comes in drunk as drunk can be with her dinner “mock turtle soup” and tells her she is put on quite a performance earlier. Ethel tells her she thinks she is behind all the deaths. Elsa respectfully disagrees and slaps Ethel across her face. Good thing she has that beard or that would really have hurt. Ethel tells her she over heard talking to creepy Stanley about killing Bette and a Dot. Elsa becomes angry and tells Ethel she is going to get the girls and put  a end to all this. Ethel whips out a gun and shoots Elsa in her leg you know the fake one.

Ethel even in her drunk state is surprised and intrigued by this turn of events. Elsa once again tells her sob story.  Ethel apparently feeling the need to unload a bit of her own luggage tells Elsa that she intends to use one of the bullets in the gun on herself. Ethel tells her none of them are innocent. Elsa suggest they share one last schnapps before they both start having tea party’s with Alice in Wonderland. Elsa ever the sneaky one manages to get the drop on a gun toting Ethel and throws a knife right into her eye. I swear this freaking show. Bye Ethel. See what happens when you roughhouse?  I’m still not sure why nobody came running when they heard the gunshot.

Jimmy runs into the main tent with Dell and finds Maggie. Maggie tells him some bull about gathering flowers for Ma Petite’s memorial when she just happened to see A a car crash into a tree and B realize it was Ethel that was driving. Elsa fakes another breakdown at the scene.

We see via flashback what we of course already know that this is all just a well told lie. What really happened is creepy Stanley wrapped a chain around poor Ethel’s neck and ties the other end to a tree. Then a big rock was put on the accelerator and presto change o Ethel’s head was ripped right off her body. You win some and you lose some and in this case someone loses their head. All that just to cover for stupid selfish Elsa. Of course Stanley has his own reasons no Elsa no freaks.

Gloria’s maid’s daughter Regina pays a visit to see her mother who Gloria lies and tells her she is out buying squash. Squash really?  That’s fine with Regina she plans on sitting and waiting for her mothers return and she will stay there as long as it takes.

All the freaks bury Ethel. While Jimmy is grieving over the loss of his mother by getting drunk with dear old dad the ladies of the freak show led by Penny are planning on getting revenge on Penny’s dad for what he did to her.

Much to my surprise Dandy visits with the shrink. After testing him the shrink tells him he needs to come see him twice a week. Dandy ask him one hell of a question before he leaves. Dandy wants to know if it’s possible to gain another’s power by eating their flesh or will bathing in their blood be sufficient enough. Mommy better look out. When he gets back home Regina is still sitting and waiting for her mother to return. Gloria tells her she should be there by dinner the next night. Regina makes it clear of she int she is going to the police. Regina heads out.

Dandy corners his mother and offers her a deal. He will go back to see the shrink if she will kill Regina. Dandy tells her if she doesn’t then Regina will go to the police and if he goes down he is taking his mother with him.

Elsa is out searching for someone to replace Ethel and as luck would have it she finds a extremely large woman. She doesn’t have a beard but I guess Elsa will take what she can get. Elsa tells her that her jiggle will be adored.

The ladies of the freak show are women of their word and they hunt down Penny’s dad and then proceed to break into his house, knock him unconscious and drag him off. Back to the freak show I would imagine.

Elsa comes back home and brings her new fat lady. It’s yet to be determined if she can sing. It’s pretty clear this is Elsa’s way of replacing Ethel. Elsa sits her down at a table and starts shoveling food down her throat. Elsa likes them big apparently. She introduces her to jimmy as Ima Wiggles. Jimmy flips out and honestly who can blame him. Jimmy tells Elsa that the world they know is dying and he has nothing left there.

The ladies freak bring back Penny’s father. The want to kill him. The bloodlust on this show is astounding. They decide to have a bit of fun with him first and think making him look like a big chicken is in order and thus they pour hot tar all over him and then cover him with feathers. Meep would be proud. He starts screaming what with the hot tar burning his skin off and what not. Maggie hears him and runs in to intervene. Which I find to be amazing I mean she is working for the guy who wants to kill every freak he can. At any rate she talks them down and gets them to let the jerk live.

Back over at 2.0’s house Gloria has just gotten off the phone with the shrink who she has told that his services are no longer needed when a very disappointed Dandy walks in. He tsk tsk’s her for the fact that he is a inbred. Gloria who still hasn’t come to grips with the fact her son is a monster devoid of all human emotion tries to win him over by telling him how much she loves him even the “I kill people for fun” parts. Dandy whips out a gun and threatens to kill himself saying it has to end. Dandy puts it to his head. Gloria begs him not to shoot himself going as far as to say she couldn’t live without him. Turns out she won’t have to. Dandy says ok and then shoots her instead. Which is a shame for two reasons. One Francis Conroy  is gone. Two Dandy becomes less believable as a killer with each episode that goes by. Dandy smiles in a rather twisted way. Speaking of twisted what I wouldn’t give to have the killer clown back.

Jimmy is getting beyond drunk when Maggie shows up. She tries to make him stop drowning his sorrows in alcohol. Trying to sell him on her happily ever after. Jimmy tells her to zip it lock it and to quit with the fairy tale bull. Jimmy suggest she leave and have her perfect life with someone else. Jimmy then starts flirting with the new freak Ima. Maggie takes off out of there.

We are back at Dandy’s house and he is is a red robe. He drops the robe and gets in the tub. He is enjoying a bath. A blood bath. You know like the title of this episode implies. He lays back and closes his eyes waiting for his mothers power to become a part of him.