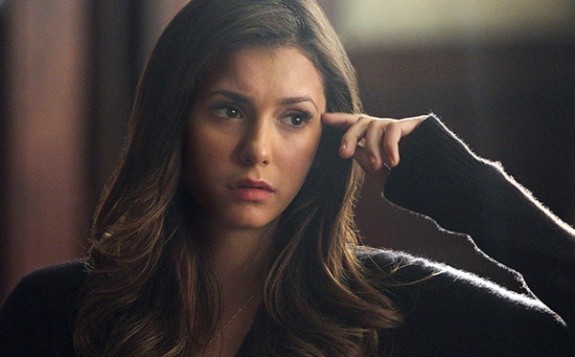 Alaric has a romantic dinner with Jo per Damon’s instructions to get the Ascendant. Stefan tells Damon how pissed Alaric is going to be when he finds out he compelled him. Damon pish posh’s that away and tells Stefan it had to be done to get Bonnie back. Damon tells Stefan he hopes Alaric already has it. Then like magic Alaric appears with it. Damon then compels Alaric to forget everything that happened.

Jeremy is jogging with Elena. Elena notices he is in a good mood. Jeremy tells,her he cried it out and is ready to,move on. Then Elena being Elena burst Jeremy’s new found happiness bubble and tells him that Bonnie is still alive and that they are working on a way to get her back. Jeremy gets upset and says blah blah blab I’ve heard it before and takes off.

Tyler is hiding Liv out in Mystic Falls to keep her safe. Liv wants to go back and do the spell that will help get Bonnie back. They get in a argument about the danger she is in if she goes back. Liv tells Tyler she can’t run away forever. Tyler insist he is going to find away to,save her. Tyler kisses her.

Sarah is with Matt and tells him what a strange place Mystic Falls is. You don’t know the half of it. Matt tells her with Tripp,goMe there is no protection for Mystic Falls. Sarah tells him to stop sulking and introduce her to her family like he promised.

Meanwhile Kai is in a cab whining about skinny jeans. Kai ask the driver whats up with all the security at the airport. The driver tells him it’s because of terrorist. The cab stops and the driver tells Kai he owes him thirty dollars. Kai gets out some headphones and chokes the cab driver to death. The Kai places the headphones on the drivers ears and gets out. Then as a afterthought he sticks his head back in and thanks the dead driver. Kai we now see is at the college.

Back in 1994 Damon and Elena are at Damon’s house. They don’t find Bonnie. Elena sits down in the couch and ponders the possibility that Kai may have some something to her. Elena meds a couch cushion with blood in it. Damon has Kai’s pager number. Elena ask what that is. Damon tells you call,and leave your number and then someone calls you back.

Sarah is with Matt in a diner when Enzo strolls in. Next is Stefan. Sarah introduces herself to Stefan and tells him she is a relative. Sarah says she is Zach’s daughter.
Elena finds a video Damon made talking about how he is in his own personal hell. Damon takes it from her and tells her its jaunt his real world audition tape. Elena calls his bluff and says it is a video journal. Damon says what no way those are so lame. Damon gets saved by the ring. Damon thinks it’s Kai on the other end but it’s Bonnie. She says Kai stabbed her and took some of her blood and then left her in Portland. Bonnie tells him she is on her way back. Bonnie says she is Indiana. Damon tells her she has to get back before Liv brings them back to the present. When they hang up with Bonnie Damon worries that Kai may already be on the loose.

Kai goes into the bar that Liv works at and orders a non existent drink,maki calls her by name.

Alaric is reading Through a book when Jo comes storming in accusing him of stealing the Ascendant. Alaric tells her he would never take it. Jo thinks Damon compelled him. Alaric thinks that is absolutely ridiculous and scoffs at the idea. Jo says they are going to Mystic Falls and across the border and see if he gets in memories back that would prove otherwise.

Elena and Damon are doing the Damon and Bonnie thing. Elena finds the story about the family murder spree in Portland. Damn tells her Kai is responsible for it. Elena tells Damon if Kai gets free he will head straight for Jo. Elena becomes suspicious and ask how he managed to get the Ascendant form her. He lies and tells her that he said pretty please with a cherry on top. Elena keeps asking questions and Damon finally admits he compelled Alaric to take it from her. Elena gets made and takes off. Damon goes after her. Elena ask him why he would do that to his BFF. Damon tells her he just wants to get Bonnie back. Elena thinks it’s more about Bonnie reminding her of how great Damon is supposed to be.

Enzo lies and tells Matt that Sarah thinks he is a loser.

Stefan orders him and Sarah chocolate shakes. When the blender comes on he tells her he knows that she is lying. When it goes off he ask her if she is ready to leave. They get up. Sarah tells Matt she will give him a call later and them she leaves with Stefan.

Kai gives Liv his ID and tells her to look at it closely. Liv sees that they share the same last name. Mai grabs her and tells Liv the last time he saw her he was trying to kill her. Kai takes some of her magic. Kai locks the bar. Liv runs upstairs. Tyler appears and throws Kai over the balcony. Tyler tells Liv to hop like a bunny quick quick quick.

Enzo is annoyed that after everything Stefan has done he is still considered a night in shining armor. Enzo tells Matt Stefan has a box of secrets that they should open.

Stefan is with Sarah. She is cloaking that Zach and Gail are her parents. Stefan calls her a liar and tells her he has watched over the real Sarah her whole life. He ask who she really is. She goes to run but he catches her. She tells him her real name is Monique.
Damon is with Elena’s on her front porch. Damon tells her how he always thought this was his hell but that Bonnie never did. Damon tells Elena Bonnie is the reason he survived and now he is doing this for her. Elena says Damon and Bonnie. Damon tells Elena not to get all weird about it. Elena brings up how her porch swing use to squeak. Damon tells her he fixed it and that him and Bonnie were there at her house everyday. Damon ask her if she would like to go in and Elena tells him yes. Elena apologizes for compelling her memories. Damon tells her they can make new ones and he reaches out and touches her face. Elena starts to feel funny and lickity split they are back in their own time. Tyler is with Liv and tells Elena that Kai is trying to kill her. Elena wants her to send her back. Elena grabs for her and gets burned. Tyler and Liv beat a hasty retreat leaving Damon and Elena on the magic free side.

Monique tells Stefan she met the real Sarah at camp. Monique found out that Sarah don’t want to,find her family so,Monique decided she would find them. Stefan tells her he can’t risk Damon finding out that Sarah is still alive so Stefan has her take of her vervain and then he compels her to forget who they are and where she is. Stefan tells her to leave Virginia and never come back. Matt shows up and then Enzo. Enzo grabs her. Enzo wants the truth from Stefan. Stefan is a little less than forthcoming and Enzo snaps her neck. Enzo tells a angry Matt they will find out what Stefan is hiding sooner of later.

Kai destroys the Ascendant and then sets Elena on fire when she gets it back together. Kai tells them there is a psycho loose in Mystic Falls.

Stefan apologizes to Matt for Enzo killing Monique. Matt points out Stefan could have stopped Enzo and didn’t. Stefan tells Matt he isn’t like Enzo. Matt disagrees and tells him vampires think human loves are worth less than theirs. Matt says it’s taken him a long time to realize that.

Jeremy insanity to,drink when Elena calls him and tells they almost had Bonnie. Jeremy says but it didn’t work out and hangs up. He is about to start drinking when Matt walks in and tells him to stop. Matt tells Jeremy he needs to learn to be a hunter again. Matt wants Jeremy to help him kill Enzo.

Alaric shows up and punches Damon for compelling him and letting Kai loose. Damon tells Elena Bonnie is probably at her house already. Damon is upset he says Bonnie risked everything for them and bone she is all alone.

Bonnie makes it to Elena’s but no one is there. Bonnie sits down and cries her heart out.

Kai is with Tyler. He tells him he is going to save Liv by making a deal with the devil.