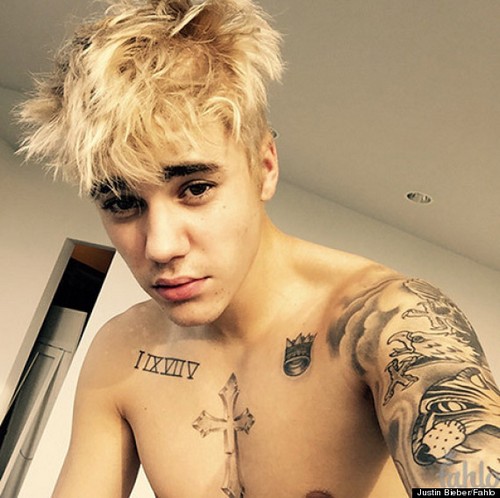 Justin Bieber just out-douched about everyone on the planet with his new look. The singer took to his Twitter account to let fans know that he uploaded a picture to his Fahlo account. He tweeted, “Left something for you on my @OfficialFahlo #blondebieber 🙂 http://t.co/srlkGAsiZv”.

Unfortunately, when clicked, fans (and non-fans alike) were greeted with the above picture of the Biebz shirtless and blonde. Seriously, I am not sure what he was going for with this new look, but it says “ultra, mega douche” to me.

Some have said that Justin dyed his hair so that he could try something new and forget about his former romance with Selena Gomez. A source revealed, “Justin said he needed to ‘shake things up’ in his life. He thought it would be fun, he said, ‘Now I am going to find out if blondes really do have more fun.’ He was with a few buddies, just guys, and seemed like he was in a really good mood. Justin flipped when he saw his blonde hair and thought it looked really cool and dope. He said a close friend dared him to do it.”