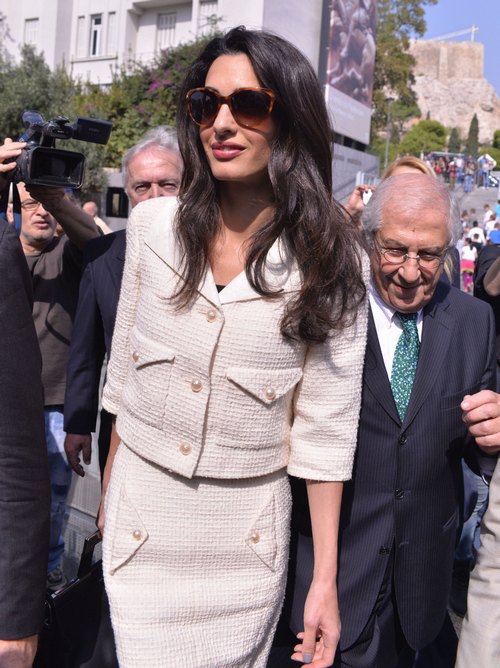 Five years ago, we never would have predicted that George Clooney would be married to an esteemed UN lawyer, and we NEVER would have predicted that he would be in the midst of a baby bump scandal. But alas, TMZ [and several other outlets] has several pictures of Amal Alamuddin sporting a suspicious looking baby bump, which could mean George Clooney is about to have his first child.

Salutations, celebrations, or sadness? George Clooney famously said in the past that he never wanted children, but then again, he also said that he would never get married. It’s hard to figure out exactly what he wants, especially since he seems to be changing his mind quite a lot these days.

Now, all the pregnancy rumors started when Amal wore a loose fitting white coat during an event at the Soho House, and she was photographed cupping her stomach. Certain photographs showed a slight baby bump, and Amal holding her stomach and wearing loose clothing just added fuel to the fire.

Amal [and by extension, George] has already had their rep deny the rumors, but by now, we’ve learned never to trust Hollywood PR people regarding pregnancies, divorces, or relationship statuses. They almost always exaggerate and/or straight up lie about what their clients are going through, and they do it all with timing and buzz in mind.

They know what’s best for their client, so even if another outlet gets the scoop first, they try to convince people to hold off on releasing the news until they can figure out a way to spin it. However, in this particular case, nobody close to Amal or George should worry – a baby would just improve their public visibility, and it will go a long way to making George more appealing to the general public again.