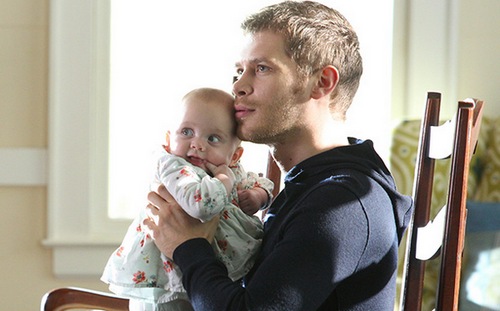 Here’s what happened on The Originals Season 2 Episode 9 “Map of Moments.”

New Orleans 1914 at Christmas- There is a doll head stuck on a fence. Three people show up and enter a house they are searching for something. More creepy freaking dolls. They ram sack the house. We see Kol is one of the little thieves and it appears he found what he was looking for a diamond disguised as a decanter top. Kol one of his accomplices to tidy up and then meet him at the cemetery. Klaus and Marcel are waiting outside the house for Kol to come out. When Kol appears Klaus tells him to hand him the diamond. Klaus tells Kol that the witches that helped him are stuck in the house and will never be able to get out.

Present – Rebekah is hanging a wreath on the door of the house they compelled the owner to let them use. Elijah is with her and is aggravated that she seems to be trying to mother him. Elijah ask her why she broke his neck. Rebekah ask him why he slaughtered all those people in the diner. Elijah doesn’t remember he tells her he just what’s to keep Hope safe.

Kol and Davina are supposed to be doing a spell to keep Esther from getting Cami’s body. Marcel walks in and sees them being all flirty. Marcel warms them to take it seriously or Kol is the next one in a box. Kol points out to Marcel how akward the situation would be if one ex was in the body of another ex. Marcel gets angry. Cami makes them stop. Davina ask why he and Marcel don’t get along. Kol tells her it’s because Klaus treated Marcel more like a brother than he did him. Kol tells her they need a diamond he had a long time ago to work the spell but Klaus took it from him. Davina and Kol decide they will go on a hunt and look for it.

Mikael is going around killing werewolves you know to let off some steam. Esther appears and he sarcastically tells her he missed her. Mikael tells her he plans on killing as many werewolves as it takes for her to Ansel over. Esther tells,him Klaus already killed him. Mikael calls Klaus a bastard. Esther tells Mikael to go ahead and hit her if he is that pissed. Mikael being a absolute dick takes her up on the offer but his hand goes right through her. She is a apparition. Esther tells him they need to discuss their children. All Mikael cares about is taking out Klaus. Surprise surprise.

Rebekah and Elijah are outside with Hope. Rebekah is making a fire which is apparently a family tradition. Elijah is holding Hope. Elijah wonders why their family is always at war. Rebekah tells Elijah spending time with Hope has made her see things differently. Rebekah reassures Elijah they aren’t the monsters their parents believe them to be. Rebekah is giving Hope a kiss when a car pulls up. Haley jumps out and makes a bee line for Hope. Haley looks at Elijah holding her for a minute and then she walks over to them. Elijah gives Hope to her mother. Haley holds her tightly. Haley turns around and takes Hope to Klaus. Klaus holds her tightly as well. Klaus gives his daughter a kiss. I honestly have to say this is the happiest and most at fulfilled I’ve ever seen Klaus. Klaus then spoils the perfect moment by bringing up Freya and the deal his mother made with the first born baby. Elijah says that the aunt is question is long gone. Haley quips like Esther. Rebekah wants them to all write down something they want for each other and then to burn it on the fire for luck. Klaus is against. Haley isn’t and we all know what Haley says goes.

Cami is with Marcel. Cami tells him she knows she might be gone in a few hours and wants to talk to Finn. Marcel doesn’t think its a good idea. Cami suggest he stop telling her what she can and can’t do and take her to see Finn. Cami thinks she can get him to stop his mom.

Klaus is using Hope as a excuse to not write a wish down. Haley starts bugging him and he finally takes a pin and paper. Klaus writes down his wish. Klaus wants Haley to tell Elijah she is going to marry her werewolf boyfriend. Klaus also points out that Elijah dodged a bullet. Lol. Haley isn’t amused and rips it to shreds.

Cami is still trying to convince Marcel to let her talk to Finn. Marcel finally gives in. When they get Finn out he is extremely weak. Cami gives him a sandwich. Instead of a simple thank you Finn tells Cami her compassion is her downfall and that her morality is always in the move because she slept with Marcel and is in love with Klaus. Finns morality on the other hand is unshakable and he knows the difference between good and evil. Finn says he won’t help her or anyone that stands in the way of him ridding New Orleans of vampires. Cami having had quite enough tells Marcel to stuff Finns pompous ass back in the coffin. Cami storms out.

Elijah is taking a stroll down a memory lane flowing with blood. Rebekah brings him something to wipe his hands with. Rebekah ask him what’s on his mind. Elijah tells her the things I’ve done the person I was. Elijah tells her it’s their mothers way of trying to get him on her side and become human. Elijah wonders if Esther would perhaps stop if she were to get three of her six children back. Elijah says she already has Finn and Kol so she just needs one more.

Davina finds a old family picture and ask Kol if it’s of him. Davina then ask about Rebekah. Koll tells Davina she is definitely Klaus and Elijah’s girl but he did manage to get her to work with him back in the day.

1914- Rebekah finds Kol going through Klaus’s things. Kol explains that Klaus took a diamond from him that if used correctly would make a dagger they could use and put Klaus in a box for a change. Kol tells her if she will zip it lock it and put it in her pocket she may find herself some Marcel time. Rebekah helps him.

Rebekah has Klaus take a Polaroid of them with Hope. Klaus sadly says they will have to destroy it. Klaus says his wish is that things don’t have to be this way. Haley takes the picture and looks at it and then throws it in the fire. They watch it burn.

A quick call to Kol confirms he will find her a body if Klaus gives him back the diamond. He wants to make himself a weapon to defend himself against Klaus. Klaus agrees and Rebekah says he is crazy. Klaus tells her no to worry Kol’s plans never work. Rebekah wants Klaus to take care of her body and he says that he will. Klaus tells her the key to all of this is taking their mother out before she jumps to another body. Klaus and Rebekah head back to New Orleans.

Elijah and Haley are watching Hope sleep. Haley tells Elijah she is going to marry Jackson. Haley says she doesn’t love Jackson but she can’t be with him if she marries him either. Elijah kisses her and then tells her to marry Jackson so they can bring Hope home. Elijah tells her that is his wish for her. They start kissing again. Clothes come off and finally they get it on.

Kol lets them know he found a body for Rebekah. Kol says he needs his mommy’s hourglass. He tells them he will need the white oak stake to accomplish that. Kol reassures Klaus she won’t use it to kill him she wants to make Klaus a human. Marcel says hell no. Klaus agrees to it and gives Kol the stake.

Kol shows up and tells his mom he wooed Davina and that’s how he got the stake. Esther tells him she was getting worried. Kol ask where Finn is. Esther says in the hands of the enemy. Esther says she has a plan for the Finn problem she will,use while waiting for Rebekah. Kol says speak,of the devil and in walks Rebekah. Esther looks surprised. Rebekah tells she heard she has a offer for her.

Davina is getting a spell ready.

Esther makes Rebekah some tea. Rebekah would prefer red wine for this discussion. Rebekah ask for the fairytale. Esther says she doesn’t need to give her one because Rebekah has always been the happiest around humans. Kol has a quick question for his dear mom. Kol ask when she thinks he is the happiest. Esther coldly tells him when he is doing what he is told. Cold as ice. Esther tells Rebekah she ready to release her from the curse. Rebekah agrees to it.

Esther is ready to start. Kol sneakily does a spell that links Esther’s hourglass to Davina’s. Esther takes out the white oak stake and tells Rebekah she has to destroy her vampire body. Rebekah freaks out and tells,her to stop. Esther tells her she can’t it started the second she flipped the hourglass. Klaus appears and demands she stop the spell. Kol tells Klaus he didn’t know about the hourglass. Esther tells them it’s impossible to stop it. Klaus tells her to take him instead. Esther says she can’t she promised Mikael he could take out Klaus. Klaus stabs her. Davina starts a spell. Rebekah falls and Klaus catches her. Esther’s hourglass explodes. Marcel ask Davina if it worked. Davina has no idea.

Klaus walks in the house with Rebekah. Marcel finds out that Finn has disappeared and he finds Cami unconscious. Marcel tells Klaus that Finn is gone. Klaus is sure it was Mikael’s doing..Cami wakes up and is excited she is still herself. Marcel,sits down by Rebekah. Marcel ask Klaus if Esther is dead. Klaus tells him he took all the precautions necessary and she is where she belongs.

Kol tells Davina a story about Rebekah and how she told a witch he liked that she could do better than him. That same night at a Christmas party Kol gets a dagger delivered to the chest by Klaus. Apparently Rebekah told Klaus what Kol was up to. Kol tells Davina he needed to get a little revenge and that Rebekah isn’t in the body they think she is. Kol tells Davina he sent Rebekah into the house that Klaus sentenced all his witch friends to stay in forever all those years ago. Kol thinks Klaus will be to busy looking for Rebekah to worry about him and Davina making a dagger. Davina ask Kol if Rebekah is safe. Kol assures her she is. Kol tells Davina to close her eyes and he kisses her. He stops and Davina pulls him in for another one.

Rebekah is laid in a coffin. Kol hands Klaus back the stake and says a promise is a promise.

Rebekah wakes up in the house. She finds a mirror and looks at her new much younger body. Brilliant absolutely brilliant. When she tries to get out she finds that the doors are locked. She starts banging on them and yelling that she is Rebekah Mikaelson. No one is around to hear her.

Saved By The Bell Casts John Michael Higgens, New Principal Has Chance To Make A…