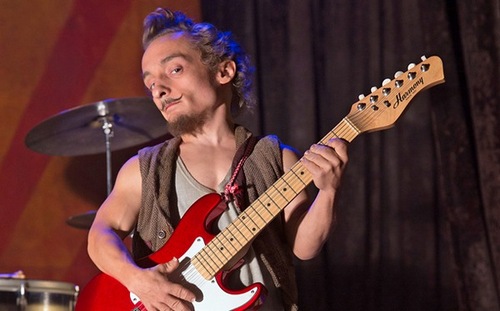 Dandy goes to the freak show to get a reading from Maggie. Maggie says she recognizes his voice. During the reading we are treated to a recap of what 2.0 has been doing since his mothers demise. Playing with puppets. Puppets made of his mother and a sales lady. By which I mean he has made them into his own twisted sick version of Dot and Bette. Maggie assures him all his sins will be forgiven. Maggie finishes her reading and 2.0 thanks her and pays her one hundred dollars.

Jimmy is beyond wasted and feeding Ima pudding. Clearly his drunk goggles are on.

Jimmy sees 2.0 leaving and chases him down before he can leave. Jimmy point blank tells him he knows he was the other clown.2.0 can’t help but smell the alcohol in and on Jimmy. 2.0 mocks Jimmy which just pisses Jimmy off. Jimmy swings and it’s a miss. 2.0 tells Jimmy he is his god and now he is going to suffer for taking the twins from him. With Jimmy on notice 2.0 is out.

Ethel left a suicide note that just happened to give up the location of the twins. Stanley is with Elsa when she goes to get them. Dot wants to know how she managed to find them. Neither of the girls trust Elsa. Good instincts they have. Elsa lies and tells them their is a doctor on his way that will separate them.

Desiree has a new man and he goes by he name Angus T. Jefferson.

Then Maggie and Desiree walk in on Jimmy jiggling Ima’s jolly old self. Maggie tries to explain to Ima that he is just doing her because he is to drunk to know she isn’t a sock or a pillow or whatever. Jimmy says that isn’t true and says Ima taste like a lemon lime lollipop. Jimmy then throws up. I would as well.

Jimmy is quite the busy boy. He is at a Tupperware Party offering his lady fingers to the guest. Jimmy drunkenly attempts to make it down the hall and fails. Jimmy lands in the floor of the living room with visions of his dead mother dancing in his is head. Ethel pretty much tells him he is a worthless drunk like his father. The lady who’s running the party decides Jimmy’s gotta go and she tosses him out. No worries though because 2.0 shows up a bit later and lies that his car broke down. In need of new eye candy the lady stupidly lets him in her house.

The twins are stashed in a torn up barn. Elsa and Stanley meanwhile head back to the freak show. Elsa is beginning to doubt letting the girls go through with it. Stanley in the mean time is telling Elsa it’s the best idea ever.

Bette freaks out upon learning about the operation details. Dot on the other hand couldn’t be more thrilled.

The husband of the hostess of the party comes home and finds his wife and all her guests dead floating in the pool. Some of them could have totally gotten away right? I mean it’s not like 2.0 killed them all at one time.

2.0 is getting ready to take another blood bath. Retina comes storming in and lets him know she is about to get the police all up in his business. Unfazed he admits that he killed his mother, her mother, and lots of other people. The creep laughs and Regina makes a run for it. He bears her to the playroom door and refuses to let her out . He suggest that she take a bath with him like she did when they were little. Gross gross gross. Regina gives him the hell to the no. 2.0 gets posses and throws another tantrum in which he calls her a hideous predictable bore. He opens the door and tells at her as she is leaving that he is most definitely above the law.

Bette tells Dot that she knows only one of them can survive and she is willing to be the one that dies if that means Dot will be able to live a normal life.

Dell is apparently having one hell of a night but for entirely different reasons. His guilt has finally become to much and Ma Petite is weighing on him big time. I’m sure running Jax over with a semi didn’t help matters much either. He attempts to write a letter to both Desiree and then Jimmy. When he can’t seem to figure out how to write what he needs to say he ends up ripping both letters up. Dell starts one with my son and goes from there. On his way out he runs into Stanley who is more than happy to show him that A he is also a freak and B it’s because he has a dick the size of a elephants …or so I heard. Dell takes off and ends up deciding to hang himself. Ethel appears to him and tells him is the weakest strong man she has ever seen. She notes that he wears his freakish nature on the inside while she and the other freaks are forced to wear it on the outside. Dell having had enough and proving that women are always right hangs himself. Desiree finds him just before he takes his last gasp of air and for no good reason I can think of she cuts him down.

Regina stupidly returns with a cop to arrest 2.0. 2.0 confesses everything to the cop. 2.0 then points out that he is a double threat because he has both money and power. The cops tells him he should probably exercise some of that power to his mouth and shut it. 2.0 has a much better idea. He will pay the cop one million dollars to dig a hole for Regina. The cop apparently needs the money because he drops her right there with a shot to the head. So long Gaby it was nice seeing you again.

Jimmy is still fall down drunk. He even brought a bottle on this tripping over nothing of a stroll. Jimmy goes in the trailer. Dot and Bette are there. Dot tells Jimmy they were about to have surgery but decided not to. Then Dot finally admits she is helplessly and hopelessly madly in love with Jimmy. She tells him he is the only man for her . Dot wants to marry him and says not many men can say they have a blonde and a brunette for a wife. Jimmy sweetly turns her down and tells Dot that he is in love with someone else.

The cops show up and arrest Jimmy for the Tupperware Party Massacre.