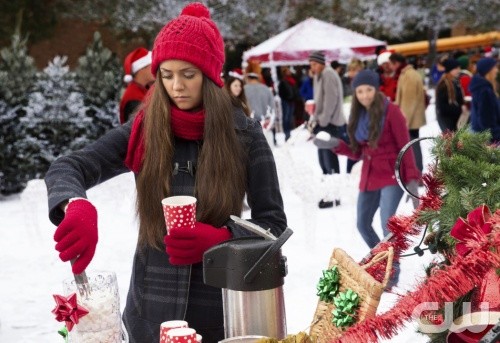 Jo calls Alaric and lets him know she isn’t going to make dinner there was a huge wreck and she is needed at the hospital. A girl is brought in and she informs Jo that A she wasn’t in a wreck and B “he” stabbed her. He of course being Kai. Before Jo can react to seeing him standing there he sticks a needle in her neck and she is down for the count.

We see a little scene from when they were in high school and Bonnie hits Elena with a snowball.

1994- Bonnie is dragging a tree through a parking lot. Bonnie says it’s not May tenth but rather Christmas tree decorating day.

Caroline finds her mom and Stefan in her dorm room. Caroline is less than thrilled to see Stefan and tells her mom she thought they were skipping the whole decorating thing since she couldn’t come home. Her mom changed her mind as evidenced by the boxes of decorations. She tells Caroline she brought Stefan because she needed help with the lights.

Damon wakes up to Elena sitting in the bar. Damon ask of she was watching him sleep. Drool you mean is her reply. Elena tells Damon she owes him a thank you for all he is doing for Bonnie. Damon shrugs it off and tells Elena Bonnie would do the same for them. Their sweet little moment is cut short when Alaric calls freaking out because he can’t find Jo.

The gangs all there when they come to the conclusion that Kai has Jo. Damon actually ask Alaric why he didn’t keep an eye in her. Alaric is like why did you let her psycho brother free. Damon suggest that they find Kai and kill him.

Tyler tells Liv and Luke all they have to do is keep Kai alive and help him merge with Jo. Luke doesn’t think it will be that easy peasey lemon squeezy. Luke says Kai will go on a murder spree.

Damon rings up Matt and puts him on notice that he needs his and Jeremy’s help to find Kai. Jeremy is a bit confused he thought they were going to hunt Enzo down.

Tyler tells Luke and Liv they need to do a locator spell to find where Jo hid her magic. Liv tells Luke that they don’t have to do any of this.

Damon goes to get Jo’s magic and sees that it’s been taken.

Kai has the knife and a knocked out Jo and Luke and Liv. Kai makes a comment about it being nice to be with family for the holidays.

1994- Bonnie is decorating her tree and thinking about past Christmases.

Caroline ask her mom about her dad. Her mom tells her not to worry and to help decorate the tree.

1994- Bonnie is thinking about a time when she helped Elena decorate her tree and decides to stay with her instead of going on a work trip with her father. They discuss all the torture they plan to inflict on Jeremy. Bonnie tells Elena how much she loves doing that.

Caroline is having trouble getting things on the top of the tree so Stefan reaches around and helps her. Caroline tells,Stefan he still is on her shit list. When her mom comes back in Stefan tells her he is going to leave. On his way out Caroline’s mom gets dizzy. Before she can hit the ground Stefan catches her.

Kai is busy stabbing Jo with the knife her magic is in. Jo tells to stop she put her magic in there and it will only be removed if she wants it back. She also lets him no due to his stabbing her she will bleed out in about thirty minutes. Kai leaves to get something to stop the bleeding. Kai tells Liv she better find a way to get the magic out of the knife. If she doesn’t he will cut her throat. Brotherly love at it’s finest.

Elena shows up to be at the hospital with Caroline. Caroline needs a distraction and ask if they have the Ascendant. Caroline wonders if Bonnie knows it’s Christmas. Elena’s hopes she doesn’t. Caroline then does the most amazing thing she defends Damon to Elena and tells Elena that maybe she has never given him his due.

Damon gets Tyler on the phone and ask if he is working with the Tweedles. Tyler tells him he is just trying to keep Liv alive and hangs up on him.

By chance Damon finds Luke. When Damon ask where Jo is Luke is cagey until,Damon points out what Kai will be capable of once he is hopped up on all that power. Geez you would think the guy was Willow Rosenberg. At any rate Damon scares Luke enough to get him to spill.

Enzo is with Matt and tells him he didn’t think he would be seeing him after he killed Monique. Matt tells Enzo he just wanted him to tell him everything Monique said to him. Matt even distracts him with a journal. Jeremy aims and fires but Enzo catches the arrow in the air. Enzo claims he knew it was a set up. It makes no difference really because together Matt and Jeremy are like the wonder twins and they take Enzo down.

Stefan shows up at the hospital. Him and Elena look in on Caroline and her mom. Stefan tells Elena he heard the doctor talking about cancer when he walked by. Elena says no. Stefan brings up some test her mom had done a few weeks ago and thinks she already knew and just hasn’t told Caroline.

Elena compels the doctor to tell her what’s going on. Stefan was right on the money. Caroline’s mom has a inoperable tumor on her spine that is getting bigger.

Matt wants to torture and then kill Enzo. Jeremy is not down with this plan and tells Matt so and then clues him into,the fact that this careless gung-ho attitude is going to get him killed.

Liv tries to convince Jo to do her sisterly duty and take on her crazy brother. Jo tells her no because he will be more dangerous if he has more power. Liv tells Jo to stuff her defeatist attitude that she can take Kai. Speaking of which …..he grabs Liv and starts draining her. Jo yells for him to stop. Jo regains her magic.

Damon gets a ride from Alaric. Damon apologizes to him. Alaric tells Damon they just need to finish it.

Kai reaches out and touches Jo and confirms she does indeed have her power back. Jo loosens her bonds. Damon gives a little whistle but I’m pretty sure it isn’t his conscious that guides Kai in its direction. Damon grabs Kai and hurls him up against a tree. Damon can’t go over the line but Kai can but no worries because Alaric can as well. Alaric puts a gun to Kai’s head. Damon yells shoot him. Jo comes running up and tells Alaric not to she is confident she can beat him she needs to gather her strength. Alaric knocks his ass out instead.

Luke is throwing some stuff in a bag so he can get the hell out of dodge when Tyler comes by and ask why he ratted them out to Damon. Luke reminds Tyler that Kai is a freaking homicidal lunatic. Before Tyler can get punchy Liv shows up and saves Luke by telling them that Jo thinks she can beat Kai. Luke doesn’t think Jo can and tells Liv people are going to start dying and it’s going to be all their fault.

Alaric gives Jo a blanket and a kiss. Then heads out to Damon and Kai. Of course they get into it and don’t realize that Kai is sucking the power out of the anti- magic spell surrounding Mystic Falls.

Bonnie lights her tree and thinks back to Caroline complaining about a little snow globe Stefan got her.

Caroline is holding that snow globe when Stefan comes up to her. He tells,her about her mother.
A,strong wind starts blowing near Kai and the guys. Elena calls but can’t hear anything due to the wind.

Damon looks at the sky while Kai digs deeper into the ground and chants.

Jeremy is at the tree lighting and the lights begin to flicker.

Matt is taking Enzo to kill him. Enzo ask of there is any better music he can hear before he does.

Damon notices Kai is quiet and knows it’s not the usual Kai way. Alaric and Damon both look over and see Kai is free and chanting.

Matt goes to check on Enzo. Enzo tricks him and then grabs Matt by the neck.

Kai throws Damon out of his way and disappears. Damon goes to help Alaric who realizes Damon went over the line and nothing happened to him.

Matt tells Enzo to kill him. Enzo has a better idea. Matt is going to help him destroy Stefan and after that he will decide if Matt gets to live or die.

Damon lets Elena know he is home and Kai is free. Elena tells Damon she has had a bad day and wants to see him. Damon tells her he will cook her dinner.

Caroline doesn’t believe Stefan and insist her mom would have said something to her. Stefan tells her Elena compelled a doctor and that’s how they found out. Caroline wants to give her mom some of her blood. Stefan tells her it won’t cure her moms cancer. Stefan tells her the tumor is inoperable and chemo won’t catch it because it is growing so quickly. Caroline is crying and begging Stefan to tell her her mom will be ok. Stefan reaches out and takes Caroline in his arms and holds her while she breaks down.

Jeremy and Bonnie both tell their trees that they miss each other. Bonnie lights hers on fire and walks away from it.

Caroline puts her little snow globe in her moms hand.

Damon gets a bottle of wine and then hears a car. Damon says it isn’t possible. Oh but it is. Stefan drives up in Damon’s car. He tells Damon it was a bitch to fix and not to die again. Damon tells him it’s a deal and they go in the house. Daemon ask if Stefan is going to stay. Stefan says that depends on whether or not he is going to have to kill Jeremy for sleeping in his bed.

Elena knocks on the door and Damon opens it but he can’t see or hear her. Kai appears and tells her he used a spell to cloak her so Damon can’t see her. Kai says he is a genius then knocks her out.