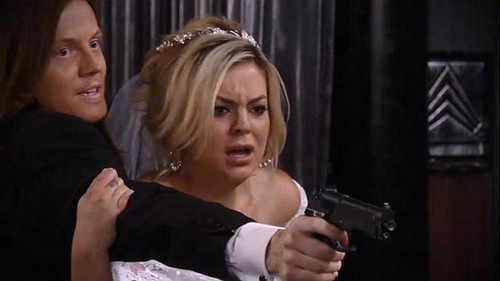 Monday- Franco is walking back and forth in his jail cell. Carly walks in and is rather pleased to see him locked up. Carly wishes he had had the balls to off him. Franco is sure he is going to Pentonville where Sonny will probably kill him. Nina is in a cell next to Ava.they both hell that they want to see “their” baby. Franco comes by after Nina tells Ava that she Franco and Ava’s baby will all be one big happy family. Franco tells Nina he can’t make any promises. Ava watches him leave with a satisfied smile on her face.

Morgan wants Silas to,do,a paternity test in the baby. Kiki gives him the ok since she is the baby’s guardian. Silas says a simple blood run won’t work and they will need to do,several other test and it could take weeks. Carly comes by and Silas ask of he can snag some of her DNA to make the testing process go faster.

Olivia sees Ned sitting with Alexis and heads over to get their breakfast order. In the process Olivia manages to insult Alexis and then inform her that she is the one that belongs with Ned. It was all just a fantasy. Olivia goes by and says it’s on the house. When Alexis leaves Ned ask Olivia what’s going on.

Julian is up for his bail hearing. Carlos tells him he works for Johnny now and to plead not guilty. Julian does so even though visions of Alexis are dancing in his head. The judge sets bail. Jerome is free to go. Alexis walks in and knows what happened. Julian ask her why she cares since she already said they can’t be together.

Sonny and Johnny get into it. Johnny makes it clear if Sonny doesn’t do what he says he will kill Ric.

Tuesday- Olivia comes clean with Ned. He lets her down gently. She says she can’t spend time with him knowing she falls more and more for him. Ned tells her goodbye and leaves. Olivia cries.

Spencer stops giving Nikolas the peace and quiet he is bound to be enjoying by telling him that Britt left Port Charles and he would have to had Helena not stopped him. Nikolas wigs out and is about to call security when Helena pops out of a hidden passage. Helena tells Nikolas he better start acting prince like or everything he has will disappear.

Sam blows off a call from Patrick. Dante is trying to figure out who the shooter is by looking at a video. Lulu takes off for Maxie’s trial. Sam tells Dante she thinks Jake did it, she then tells him Spinelli is working in the video as they speak. Dante would like to have a little chat with Spinelli. Spinelli comes through and Sam is sure it’s Jake once she sees the guys eyes.

Jake and Elizabeth have lunch. Elizabeth tells him Sam thinks he is the shooter. Elizabeth doesn’t believe Sam however which is a relief to Jake.

Maxie is denied visitation because she went agains the judges orders and has seen Nathan. Alexis gets anger and says she will be filing a appeal.

Obrecht comes to see her son. But he is to distracted by Maxie to really listen to Obrecht. Even though she fesses up about Britt taking off with Faison.

Wednesday- Maxie lets Nathan know she doesn’t get to see Georgie. Nathan gets upset and tells her he will make sure she sees her for Christmas.

Silas lets Ava know Carly is helping Kiki and Morgan with the baby. Ava thanks Silas. Silas lets her know they are doing the paternity test in her daughter.

Shawn sees Sonny. He tells him they found the baby and are doing a paternity test. Also that Ava is in jail. Sonny tells Shawn to find Ric or else he will have to give his business to Johnny.

Michael evicts Kiki and Morgan. Carly tells them that they can stay with her.

Patrick lets Sabrina know the accident that killed their son was caused by Victor Cassadine. Patrick then tells Sabrina everything including his big screw up with Sam. Sabrina thinks Sam will forgive him. They hug.

Sam runs into Jake. He insist he didn’t do it. She insist they will see about that. When Sam walks away Jake has flashes of what happened and wonders if Sam was right.

Sabrina apologizes to Ava for what she did. Ava excepts her apology and then issues one of her own for using Sabrina to her advantage.

Patrick apologizes to Sam and tells her he doesn’t want to throw away what they could have had. Sam doesn’t either.

Thursday- Shawn and Duke are talking about Sonny’s dilemma. Duke decides he will give Johnny and Julian exactly what they want.

Carlos has Ric in the back of a trunk. He shows him to Julian. Julian wants to let Ric go. Duke calls and ask for a meeting with Julian.

Nathan and Alexis are discussing Maxie’s situation. Alexis tells him she isn’t giving up. Nathan wants Alexis to defend Nina. Nathan says she is sick and Alexis agrees. Nathan then reminds Alexis that he and she are family. When Alexis leaves Nathan calls someone to help him with Maxie.

Jake has a memory of holding a gun on Sam. Patrick comes up and they start talking. Sam is brought up and Patrick says what about her. Jake ask if he can forget as quickly as he does something.

Franco tells Nina he will never ditch her.

Anna wants Jordan to help her find Ric. When Anna points out it will make TJ happy because of Molly Jordan is all in.

Alexis goes to see Nina and tell her Nathan hired her. Nina won’t let her do it unless she takes on Franco as well.

Julian meets with Duke. Duke tells Julian round one goes to him but there will be others. Duke later tells Shawn he bought him time to look for Ric.,

Jordan tells Julian she wants to get back to work.