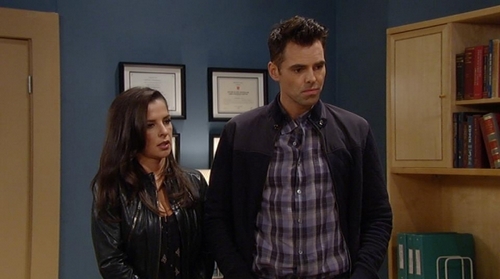 Monday- Nina is really kissing up to Alexis telling her how much she appreciates her taking her case and what a great person she is. Then Alexis lets her and Franco know she wouldn’t represent him if he were the last client on earth. Nina changes her tune and accuses Alexis of tricking her. Alexis assures Franco she got him a attorney. When the attorney shows up he isn’t about to take any crap from Franco and he pretty much tells him he better zip it lock it and put it in his crazy selfs pocket. Nina gets sent to a hospital for further psychic evaluation. Franco meanwhile is sent to Pentonville. Nina becomes upset and starts screaming hysterically. Franco tells her he will be ok. Nina is taken from the courthouse.

Julian goes to see Sam and make sure she is okay after being held at gunpoint. Talk turns to his job and his hope she won’t shut him out of her and Danny’s life. Sam tells him she won’t. Sam gets Danny and then talk turns to Molly and how much she misses Ric.

Jordan is trying to find a link to Ric and jukian in his office but comes up empty. She is on the phone with Anna when Shawn comes in and accuses her of knowing exactly where Ric is. Jordan tells Shawn she doesn’t know anything. Jordan then calls Julian and gets him to tell her exactly where Ric is. Unfortunately Carlos overhears her and Shawn.

Johnny is on a cell in the prison yard when Sonny comes up and tells him he wants proof that Ric is still alive. Johnny tells Sonny he will just have to trust him. Johnny then comments at how easy it was to get Duke to hand over Sonny’s territory Sonny tells him he already lost his son he isn’t going to lose his brother to. I’m literally distracted by all the gray on Sonny’s beard. Johnny gets a call from Carlos about Shawn and Jordan. Johnny comes back and tells Sonny that Ric is as good as dead. Sonny slams him against a wall and whips about a toothbrush that’s been made in it a weapons before Sonny can stab him Franco shows up and tells Sonny they have to stop meeting like this.

Nathan is on the phone planning something for Maxie when she walks in. He gets off the hound and she talks about how her chances of being a mother to her daughter are slim to none. They play a game and Alexis calls Nathan about Nina she also tells him she is going to meet with Judge Walters.

Morgan finds out from Silas that Sonny is the baby’s father. Kiki and Morgan walk off together and they end up kissing. Carly is trying to figure out what to do with the news.

Maxie goes to the courthouse and is met by Alexis who tells her the Judge reversed his decision and she can see her daughter.

Carlos goes to Ric and tells him killing him is nothing personal. Before he can pull the trigger Shawn and Jordan bust in with their own guns pointed at Carlos.

Tuesday- Maxie flies into Nathan’s room and tells him she gets to see her daughter. Nathan is excited and happy for her. Maxie thinks he had something to do with it. Nathan claims he didn’t. Maxie wants Nathan to come with her but he tells her his mom wouldn’t allow it. Nathan tells her they can just have Christmas together a little early. Maxie agrees and then takes off to get a flight to Portland. When she returns she has a all you can eat for a year ribs gift card for Nathan from the floating rib because she knows how much he loves his meat. Nathan got Maxie a limited edition pair of shoes. She puts them on name tells him she thinks they glow. They share a kiss and he promises they will have a great New Years together. Maxie leaves to get her flight.

Morgan and Kiki freak out about their kiss. Kiki tells him whatever that kiss is it doesn’t matter the baby does.

Carly meanwhile unloads on Jake who listens once again without passing judgement. I still can’t believe nobody realizes who he is. It’s crazy. I mean why don’t they do a DNA test or fingerprint him or something.

Johnny tells Franco after what he did to Lulu he would never be desperate enough to call him his friend. Sonny then pretty much tells Franco it’s his turn to be somebody’s bitch and then she that is over Sonny is going to kill him. Sonny puts the toothbrush on Franco who then gets sent to solitary. Johnny comes back to argue with Sonny some more.

Carlos is determined to kill Ric until Shawn points out he will die to. Carlos backs off and out but not before telling Jordan she has made a deathly mistake. Shawn and Jordan help Ric out of the car. He thanks them both. He wants to go home. Shawn ask where that is and Ric tells him where his daughter is.

Molly comes hime and flips out on Julian. Julian wisely leaves. While wrapping gifts Sam tries to talk to. Only but Molly is to angry to hear it. Alexis comes in and Molly takes Danny to get some coco. Sam tells Alexis about Julian’s visit and Molly coming hime while he was there. Alexis tells Sam Ric is alive. Molly hears Sam and her mother and ask what they are talking about. Before Alexis can tell her Ric knocks on the door and Molly answers it. Molly and Ric hug.

Fluke shows up at Julian’s pretending to be Luke and Julian buys it. When he reveals he isn’t really Luke Julian demands to know who in the hell he is. Carlos comes in and tells them all about Jordan. Fluke orders Julian to kill her.

Wednesday- Alexis goes to see Julian and bitch at him about Ric. Julian tells her to mind her own business and get the hell out. Alexis says he is right. Alexis admits that she loves him but can’t be with him. Julian tells her that the goodbyes never get easier. Alexis leaves in tears and Julian wipes his eyes.

Sam has Danny all set for the GH party. Ric thanks her for letting him stay there even though she doesn’t like him. Sam says it isn’t about her it’s about Molly. Sam leaves and Molly insist her dad go and find Elizabeth. Ric goes. TJ shows up and Molly tells him she got the best gift ever. TJ is upset someone beat him to it. Molly tells him her dad is alive and back. TJ is happy for her and they hug.

Maxie calls Nathan as she walks to Spinelli’s door. Nathan gives her a pep talk and she notices he is already used his gift card and gotten some ribs. They hang up and she knocks on the door. Spinelli answers and she tells him Merry Christmas. Spinelli makes a joke about Georgie not being there and instead at work with Ellie. Maxie doesn’t find it funny. He opens the door and her little one is sitting in front of the tree playing with some toys. Spinelli gets a call from Ellie and leaves the room. Maxie calls Nathan so he can see her daughter over FaceTime.

Over at GH it’s a big old mess. Monica tries to tell the story of Christmas then Obrecht shows up dressed like Krampus. After Nicholas has Santa save the day Sam comes in with Danny.
Elizabeth see Patrick and ask him if he can drop Cameron back off at home because her and Jake need to out a gift together. Patrick says he will. Elizabeth sees Jake and Sam arguing and ends it. Patrick heads over to Sam. He gives her a gift. It’s a keychain for her to put all her silly putty keys on. Obrecht comes to see Nathan and he thanks her for helping with Maxie. Nathan tells her Merry Christmas and calls her mom. He takes her hand and sings the First Noel. You see what everyone is doing. Maxie is with Georgie. Sam and Patrick kiss under the mistletoe. Monica is with Judge Walters.

Jake and Elizabeth are standing under the mistletoe at her house. They almost kiss. Ric appears. Elizabeth turns into a blubbering idiot. Ric tells her he would like to pick up where they left off. Elizabeth is all for it. Jake sees them kissing.

Friday- Epiphany ask Elizabeth if she is spending New Years with Jake. Elizabeth tells her she needs to get with the times Ric is back which means she has no room for Jake in her life. Epiphany thinks different and sends Elizabeth home to figure out just exactly what it is she wants.

Ric goes to Elizabeth’s and uses the I’m not really a dick I’m just trying to help approach and makes it clear that Jake needs to leave. When Elizabeth gets home Jake tells her he is going to move out.

Shawn and Duke are talking when Alexis comes up to them she sits and thanks then for their help with Ric. Ric comes by next and thanks Shawn again and then tells Duke to let Sonny know he wants no part of his mob mess.

Fluke comes by to see Julian and he is pissed. Julian hasn’t killed Jordan yet. Julian tells him he doesn’t know where she is. Lucky for Julian Fluke does. He gives Julian a gun and tells him to get the job done.

Anna and Dante go to see Jordan and suggest the only option she has to save her ass is to go to work for Sonny. Anna is sure it will work because of her relationship with Shawn. After they leave Jordan gets dressed. When she comes out of the back Julian is in her room waiting for her.

Lulu gets Nathan Hope. Nathan is all nervous but Lulu tells him to calm down she has it all under control from breakfast to the tux. Nathan just wants it to be perfect.

Maxie is talking ninety mikes a minute when Spinelli tells her that her flight hime has been cancelled. Maxie panics. She calls Nathan and tells him she is stuck in Portland. After they hang up Maxie gets determined to get home to Nathan.

Nathan’s equally determined and hops a flight to Portland only to of do out from Spinelli Maxie is headed back home.

Maxie gets back to a empty apartment.