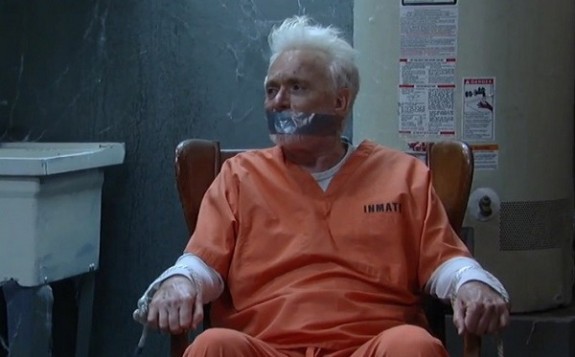 Monday- Maxie and Nathan are having marathon-sex. They finally eat something.

Julian and Olivia wake up together and regret it as do Ned and Alexis but of course Ned and Alexis lie to each other. Later when they run into each other Ned accuses Julian of getting Olivia drunk and taking advantage of her. Olivia sets him straight and tells she did it because she wanted to.

Morgan goes to see Sonny and tells him the little girl is his.

Fluke and Bobbie get into it about Billy Ekert. She knocks him down and Fluke builds him up.

Kiki and Silas take the bay to Ava. As she holds her she decodes to name her Avery. They take Ava away. Silas tells Kiki they will figure something out.

Ava gets cat calls at the prison. Sonny tells them to back off. Ava tells Sonny her name is Avery. Ava thinks she is in the clear with Sonny. Sonny tells her not to bet on it.

Tuesday- Sloane lets Anna know he can prove Johnny boy didn’t kill his father and he has the evidence to prove it. It gets better for Anna Sloane is having Johnny released as they speak.

Johnny gloats to Sonny about getting out and tells him he just may go after Olivia and Carly. A guard comes and gets Johnny who continues to talk smack as he leaves.

Olivia attempts to apologize to Alexis who accuses her of sleeping with Julian to get to her. Olivia gets angry and ask Alexis why she would even give a damn and then tells her she will get everything she deserves.

Ric acts like a dick about Jake to Elizabeth and right after sex. After she lies through her teeth about her feelings for Jake they kiss and get dressed. Ric offers to take her home.

Carly brings Jake breakfast and he agrees to eat if she joins him. On their way to work they run into Ric and Elizabeth. Awkward.

Fluke wants Carlos to kill Julian. At first Carlos refuses and makes up excuses not to but he finally agrees. Fluke laughs happily.

Lucas goes to see Julian. After he leaves Carlos shows up pointing a gun.

Wednesday- Michael calls Bobbie grandma which makes her happy. Michael tells her he wants to turn her and Luke’s childhood home into a clinic. Bobbie tells Michael she approves. Michael tells her a Bill Eckert owns the house. Bobbie says he does over twenty years ago.

Tracy and Ned decide to get along in 2015. Tracy ask about his New Year’s Eve and suggest he has a thing for Olivia. Ned tells her he saw Luke fighting with Bobbie over Bill Eckert. Tracy is dumbfounded.

Fluke goes to see like and lets him know he is in his childhood homes basement. Fluke brings up Patricia and Luke wonders how he knows about her. Fluke suggest to look he could be part of his family. Like realizes Fluke is Bill Eckert. Fluke tapes his mouth back up and leaves.
Dante finds out from Anna that Johnny is free as a bird. Dante says he hates his relationship with Lulu. He then brings up Johnny’s relationship with his mother. Anna thinks Dante is getting worried over nothing. Dante disagrees.

Johnny true to his word to Sonny manages to get Lulu Carly and Olivia all in the same place. They are all happy to see him for their various reasons. Johnny is having a drink with Lulu when Dante comes walking in.

Carlos is about o kill Julian when they come up with a plan. Julian will confess to killing Anthony Z. Julian tells Carlos to be careful.

Julian goes to Anna and tells her he killed Anthony.

Thursday- Sam goes to see Nikolas and tells him she thinks that Jake was the masked man. Nikolas brings up Helena. Sam is determined to get to the bottom of it.

Fluke calls Carlos and yells about Julian getting away. Tracy walks in and he lies. He then tells her about Johnny being out of the slammer and Julian in it.

Johnny is back at his own house when Dante and Nathan come by and hassle him. Johnny brings up Lulu and Maxie respectively pissing both of them off. They threaten him and leave. Fluke comes by next and Johnny can’t get over how much he looks like Luke. Fluke ask him about Julian’s confession. Johnny doesn’t know anything.

Carly tells Jake she wants to be happy without Sonny. Jake thinks it’s a good idea. She shoes him his to mix drinks. He sees a picture of the masked man and has a brief memory. He tells her about Sam. Carly thinks Sam is nuts.

Maxie and Lulu catch up. Lulu tells her about Johnny being out of prison. They are glad they have good guys now. They check out Jake until Nathan and Dante walk in.

Sonny finds it funny that Julian is in prison. Julian tells him it wasn’t Johnny that got him to confess to killing Anthony.

Michael ask Ned to call Jenny. She doesn’t know anything about the house. Ned is pleased as he watches Michael work.

Friday- Bobbie gives the key to her childhood home to Michael. They both head over to it.

Helena is on the phone with Fluke. She gets off when Nikolas comes in. Helena gives him a file that has ELQ written on it and ask Nikolas if he is ready to be head of the family.

Michael and Bobbie hear Fluke in the basement. Michael’s says he will check it out while she calls the police.

Jake tells Carly he doesn’t know who he is or what he is capable of. Carly suggest he see Kevin.

Sam goes to the hospital and sees Obrecht. They bicker back and forth. Sam runs into Jake and Carly. Jake heads to see Kevin and is greeted by Helena instead.

Sonny helps Julian take out Johnny’s thugs. Julian thanks him and sonny tells him as long as Johnny is after them both they will be working together. Julian says it isn’t Johnny they need to worry about. Sonny ask who then. Julian says all he can tell him is the guy in charge has Luke’s face.