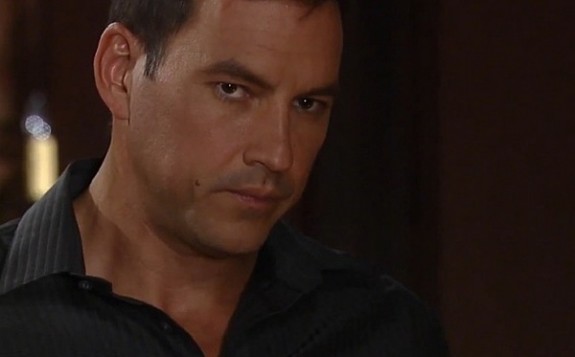 Monday- Nathan and Maxie come flying into the apartment so they can get in a quickie during their lunch. Nathan tells her that Sam thinks Jake is the guy behind the mask. Maxie thinks Sam needs to let it go and have a life with Patrick.

Jake finds Helena in Kevin’s office. They have a chat about this and that and how he is guilty as guilty can be. Helena reminds him once he leaves the room he will forget everything except you know this one teeny tiny thing she needs him to take care of.

Carly and Sam get into it over Jake is innocent or guilty.

Helena meanwhile lets us in on what she wants Jake to do. It’s simple really…. kill Sam.

Lulu and Tracy gab about look and the Aunt Lulu never knew she had. Then talk turns to Johnny and how if Lulu is smart she will stay the hell away from him.

Nikolas ask Alexis for the 411 on ELQ and Michael. Alexis tells him what she knows including the fact Tracy gave her shares to Jerry to try and get Luke back.

Bobbie and Michael almost see that a Fluke has Luke but Fluke once again fools everyone. Michael tells him Bill’s son Sly has the deed to the house. Which upsets Fluke. So is he Bill or Sly? I kind of want him to be Damien Smith. Michael wants Fluke to talk a walk with him and listen to what he wants to do with the clinic.

Sonny tells Julian that they should go,to the cops. Julian tells Sonny to pull himself together there is no way they can do that. Sonny begins to consider their options.

Tuesday- Felicia puts up her first poster for her run for mayor. Cut to Duke and Lucy looking at the poster reflecting on everything that has happened since.

Sloane gives Anna a search warrant. He wants to search for a missing ballot box. He is confident both Felicia and Nikolas Cassadine played a role in its disappearance. The warrant is for Wyndemere.

Alexis is going toe to toe with Scotty as Felicia’s attorney.

Maxie and Nathan are together when he gets called by Anna. She wants him to handle the search at Wyndemere.

Lulu finds the ballot box in Nikolas’s living room. Nikolas tries to explain but Dante and Nathan get their first. Spencer takes the blame and then pins Shawn and Jordan as the ones he saw with the box in the first place.

Nathan gives the box to Scotty. Scotty resumes the count since the box hasn’t been opened.

Jordan has a memory of throwing the box in the river in order to prove her loyalty to Duke. Dante shows up and tells her Spencer says she is the guilty party. Shawn walks in and Jordan covers.

Come to find out Lucy stole the box to begin with. Lucy inky did it because Lomax threatened to put Duke in jail if Felicia won.

Lomax is named the winner. Lomax gives Sloane Anna’s job. When they are alone Sloane and Lomax bring up the fact Felicia won but thanks to Nikolas Lomax was the declared winner.

Nikolas is busy burning ballots in his fireplace.

Wednesday- Maxie thinks the election was fixed so that Lomax would win. Nathan tells her he wills we what he can find. Then they decide Nathan should move out for awhile since Maxie is afraid she will screw it up.

Anna and Sloane get into it. She accurately accuses him of helping make sure Lomax win. Sloane denies it. Anna says no matter she will get to the bottom of it.

Nikolas questions Helena about having Tracy’s shares. Helena tells him that’s the first move in taking over ELQ. Helena is surprised Nikolas is interests. He tells her it’s time to become a Cassadine.

Michael runs into Rosalie and offers her a job. Rosalie declines but then when he offers another job as his assistant she takes it.

Jake wakes up after having a dream about killing Sam. He has a gun in his bag. Carly interrupts him so he hides the guy and comforts her. After she leaves he loads the gun.

Helena tells Nikolas Michael just hired someone who really works for her.

Sam gets caught by Patrick going through Jakes file. Patrick says he misses the old Sam. She suggest they pick up where they left off on their last date.

Thursday- Jordan tells Anna she wants out. Anna tells her she will be safe with Dante and Nathan behind her.

Sloane chews Dante and Nathan because he thinks they are lying about knowing what Anna has been up to. Later he apologizes to Nathan.

Helena tells Nikolas Rosalie is working for her because she knows her secret.

Rosalie and Michael are at the old house. When Michael wanders off Rosalie calls Helena who orders her to getMichael out of the house now. When Michael comes back Rosalie pretends she twisted her ankle. Michael takes her to the doctor.

Johnny runs into Fluke at the haunted star and tells him Sonny saved Julian’s ass. Fluke is not happy. Lulu comes in and Fluke leaves. Johnny tells her he bought back his half of the business but thinks it might have been a bad idea because Dante doesn’t like him being around her. Lulu gets angry and starts bitching just as Dante walks in.

Sonny tells Shawn all about fake Luke and tells him to find out who he is and what he is up to. Shawn wants Jordan to help him.
Fluke sees Michael and Rosalie leave then he goes in the house.

Helena tells Nikolas that they are working with Luke. Nikolas isn’t buying it.

Friday- Elizabeth tells Patrick that Sam is being silly when it comes to Jake.

Michael brings Rosalie in and Lucas helps her. Michael offers Lucas the opportunity to run the clinic.

Jake is thinking about killing Sam when Elizabeth walks up. She tells him she misses him and she wants him to,come back to her place. Jake tells her when it comes to her he just can’t be her friend and he leaves.

Sam is making dinner for Patrick. Alexis comes in and they talk for a bit. Patrick knocks and Alexis runs upstairs. While drinking wine Alexis has to come Dow and leave. Sam leads Patrick upstairs. Jake breaks in wearing a mask.

Sonny and Julian argue over Sonny having Shawn look into Fluke.

Shawn follows Fluke. Helena arrives and Shawn hides. When they leave Shawn grabs a crowbar and starts to break the basement door open.

Dante is pissed to see Lulu with Johnny. Lulu tells him that they are business partners again. Dante doesn’t like that idea and suggest Lulu share her half back to Johnny.