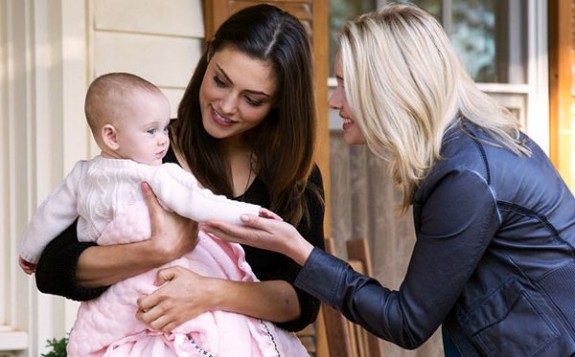 Hayley is walking around holding Hope. Klaus is monologue-ing. Elijah is still on his trip courtesy of his mother. Davina is being kissed by Kol. Finn is with his father. Rebekah is still trying to get out of the insane asylum. Esther is holding her stomachs looking at the bag of blood Klaus left for her. A car pulls up outside the hide out. Turns out the whole time Klaus was talking to Cami. He brought her there to hide her from Finn. Klaus tells her he wants her to meet the newest member of the family. Haley comes out with Hope. Cami is shocked. Klaus explains the in,y way to keep her safe was if everyone thought she was dead. He makes Cami promise to never tell anyone Hope is alive. Cami promises and goes up the steps and goes over to Hope and holds her little hand.

Cami is sitting in the living room with Klaus. Elijah is looking out the window. Klaus explains that he and Haley will go back and deal with his mother while Cami stays with Elijah and Hope to wait for Rebekah to return. Klaus tells Cami that Elijah is still have a few issues with whatever mommy dearest did to him. Elijah says he slaughtered a tiny cafe of people and is never going to hear the end of it. I could only hope to be as flippant under the same circumstances.

Rebekah meanwhile in her new body is strapped to a bed being force fed drugs.

Finn is with his father. Finn is going in and in about his mother and his siblings. Mikael promises Finn they will kill them all together. Finn is glad to hear that because he is going to require his fathers strength.

Haley is with Jackson. He is telling her all about the marriage and the trials they have to go through before it can even take place. Haley looks like she might be sick. Before she can say anything all the werewolves show up followed by Marcel and company.

Rebekah wakes up spits out the pill and mocks the idiots around her. Cassie comes in and tells her she knows what Rebekah is saying is true because her mother jumped into her body once. Rebekah is all ears Cassie tells her no one gets out of there alive.

Kol is settling in at Klaus’s. Klaus appears and gives him a bottle of wine as a welcoming gift. Finn shows up and ruins everything. He demands to know where his mommy is. Klaus says she is safe and sound and far away from Finn. Finn calls them arrogant and tells them it won’t last long.

Haley assures the werewolves they will have freedom. Marcel promises they will stand by them agains the witches as long as they promise peace between them after the wedding. Finn comes rushing in and starts getting each side pumped up. Finn then does this nifty little trick where they are all locked in the building. Finn is sure after several hours stuck together the will either kill each other or see things his way either way it’s a win win for Finn. He strides out rather smugly.

Klaus points out to Kol that this is a witch thing so he needs to fix it. Kol demands to know how he is supposed to do that. Klaus says he doesn’t really care either he does this or dies. Kol tells him that he will need some help.

Marcel meanwhile is getting out boxes of alcohol. Maecel tells Gia to drop the smart ass attitude and be more helpful. She leaves and Haley comes in. She wants to know what Marcel’s brilliant plan is. Marcel throws a bottle of alcohol at her. She takes a swig and heads out.

Elijah attempts to get in touch with Rebekah but has no luck. How would that even be possible. Like the new body is just going to have Rebekah’s old cell phone on it. Anyway Cami walks in with a bottle of alcohol, I sense a theme. Elijah thinks she is trying to get him drunk so he will bare his soul to her. Cami thinks he is a self centered prick and all she wants to do is drink and play a game of trivial pursuit thank you very much. She opens the game and ask him a question. Elijah refuses to bite until she brings up Haley. Elijah is all in the spirit of trivial pursuit after that.

Klaus correctly guesses that Haley and Elijah got it in the night before. Haley is feeling guilty. Klaus suggest she zip it and lock it and not tell Jackson anything about it.

Cassie is showing Rebekah around and telling all about her new home away from home. Rebekah sees scrabble tiles and tells Cassie that maybe there is a way they can send out a S.O.S.

Davina shows up to save Kol and company. They both touch a side and get burned. They start to chant and and they both jump back. Davina seems to think Finn must be using a dark object to keep the spell going. Turns out she was right Finn is using what I presume is a dead Mikael.

Cami who is a little tipsy is reading cards to Elijah who as it turns out is not only a dashing killer but also a know it all. Cami can’t believe he knows all the answers. She accidentally pours some of his alcohol on him and he has a mini freak out while trying to clean it off. Cami tries to get him to focus he snaps at her. Thankfully his phone rings. He assumes it’s Rebekah. Again her cell phone is where? It’s actually Angela Barker who come to find out isn’t Rebekah. Elijah calls Klaus and lets him know about it.

Kol shows up just as he hangs up to tell him they need some supplies to out witch Finn. Kol suggest Klaus can accomplish it by telling Finn where Esther is.

Haley who just can’t listen to anybody comes out with it and tells Jackson she was getting horizontal with Elijah while she was gone. Jackson ask if she is in love with Elijah. Haley stays quiet because it’s obvious. Haley tells him she is still on board with the marriage. Jackson isn’t if Haley sees it as a sacrifice.

Josh steals Aiden away for some smoochy time when he starts to feel funny and gets the sudden urge to rip Aidens neck open. Josh tells Aiden something is definitely not right. Josh hurries away.

Turns out Josh isn’t the only one it’s all of the vampires except for Klaus. Klaus is trying to figure out what to do.

Klaus has no choice but to do what Kol said and call and offer up Esther as a bargaining chip. Finn bites and Klaus gives him her location.

Rebekah is trying to send her S.O.S but Cassie can’t get passed the drugs in her system. Rebekah tells her to focus up. Before hey can someone burst in and tell them it’s dinner time.

Kol tells everyone he and Davina can cast a spell that will break Finn’s for sixty seconds. Klaus points out the vampires daylight rings won’t work anymore. Marcel says they won’t be alive if they wait till night.

Meanwhile Elijah is having flashbacks of all the blood he has spilled over the centuries. Cami unknowingly walks in in his spiral and he goes to hurt her. Something stops him however and when she opens her eyes he is gone.

Rebekah meanwhile is talking to scrabble tiles and trying to fight her way out. She runs into the ghost of the witch and tells her she hopes she is a friendly ghost like Casper.

Finn finds his mother and then realizes she is a vampire. Finn backs away from her in disgust and disbelief.

Davina and Kol are putting salt in a circle. Things a re getting tense between the wolves and vampires. Aiden gets cut open and it’s feeding time. Josh tries to help him but even he gets a eatery mouth. Klaus gets everyone away from him. Marcel suggest Davina and Kol hurry the hell up with that spell.

Rebekah tries to follow the ghost through a door but she can’t. No worries it opens all by itself. She sees what I presume is her own coffin then she is dragged away.

Esther is begging Finn to understand why she did what she did. Finn isn’t interested in her reasons all he is interested is the fact she went against her own beliefs. The beliefs he has stood by her on. Finn tells her not o worry he will finish what she has started. He covers her mouth with one hand and has a dagger in the other. Esther screams.

Kol and Davina get her done and the wolves take off. Klaus runs out next to Davina and throws Kol back in with the vampires. He tells him this is what he gets for lying about Rebekah. Klaus leaves. Davina begs Marcel to help Kol and he does.

Jackson ask Haley to marry him. Jackson tells her he knows they are getting married to help the werewolves. He apologizes for getting angry at her for being with Elijah. Jackson tells Haley he loves her. She touches his face and then stares at the ring after he puts it on her.

Klaus calls Elijah and tells him to stay with Cami and Hope he will find Elijah. Elaijah agrees and then ends the call to talk to Cami. Elijah tells her he is sorry and he hopes she will accept it even though he doesn’t have that whole cute grin thing going on that Klaus does. Cami does accept it. They both head back in the house.

Klaus goes to check on Esther. She is long gone.

Find has her and he puts her in a circle with his father. Finn says he remembers how happy hey were but. Then something happened and it left them. Then she had monsters. Finn says his parents got what the deserved and so will the rest. Finn leaves.

Kol runs into a room and starts putting things in front of the door. He sees a picture of Rebekah on the dresser.

Rebekah is knocked out in bed. The scrabble tiles spell out a name. FREYA.