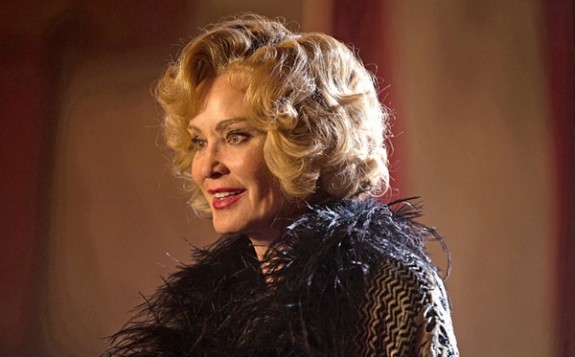 2.0 is not only the proud new owner of a freak show but he is also the freak shows brand spanking new singing act as evidenced by the over the top banner he whips out. Penny couldn’t be more bummed and refers to them all as sell outs. Paul suggest she swallow her pride and just go with it seeing as how he is now their money train.

2.0 is getting ready for his first performance. Paul tells him he may want to hold off on the getting ready bit since the freak show hasn’t sold a single ticket. 2.0 becomes upset and throws a fit and claims it’s all the freaks faults no tickets have been sold. 2.0 decides he will fix this minor setback by acquiring a new freak. Eve who is quite upset herself straight knocks him in his ass with one punch. Paul tells 2.0 he is a fool for thinking he could ever be one of them. Paul then spits in his face before he informs him that they all quit. They file out of the tent. 2.0 is about to snap.

Next we see Elsa at the WBN. She wants to meet with the Preside t of the company but is told by the secretary as she has been for several days now he has no available appointments. Elsa informs the secretary that she will wait there all if need be. The end of the day comes and the secretary gets up,to leave. Elsa ask where the President is since she didn’t see him leave. The secretary tells Elsa he snuck out the back so he wouldn’t have to deal with her. Elsa becomes angry and slaps her hard across the face. A security guard grabs Elsa. Elsa breaks down in tears. A man comes out and helps Elsa. He is the Vice President in charge of casting. He introduces himself to Elsa as Michael Beck.

2.0 didn’t just snap he went off the freaking deep end. He is just walking around shooting any and all the freaks. Picking them off one by one. Desiree happens to hear the gunshots as does Eve who grabs a axe. 2.0 strides into where Desiree is but he can’t find her because she is hiding. This only serves to make 2.0 even angrier. Before he can find Desiree Eve comes in and attacks him with the axe. He manages to get the upper hand and shoots her in the knee. He then shoots her in the head. Desiree manages to escape. 2.0 goes back to the main tent where he has Bette and Dot tied up and ask them to go with him.

Jimmy shows up at the freak show and can’t find anyone. Jimmy walks into the big tent and all most falls over at the sight of all his friends in a pile dead. Desiree appears and they hold each other and cry.

Over at 2.0’s house he is in the playroom with the twins. Bette and Dot are in a wedding dress. 2.0 kisses Bette. I’m pretty sure she threw up in her mouth just a little bit. Soon they are having a meal together as husband and wife and wife? 2.0 is really selling the happily ever after forever and ever bit to them. Turns out they aren’t buying. The maid who I will just call Desiree walks in with a special night cap for 2.0. 2.0 figures it out but it’s a little late. Bette and Dot tell him that he is a fool there is no way they could ever love him after what he did to their family. Jimmy comes striding in. It’s payback time.

2.0 finally wakes up from his beauty rest to find himself chained up in a tank, looks like he is going to play Houdini. Jimmy, Bette, Dot, and Desiree are excited to watch him die in the most show stopping way possible. Desiree gets in one last parting shot before she turns on the water. Desiree tells him he may look like a dreamboat but he is definitely the biggest freak of them all. They all sit down to watch. Desiree is eating popcorn. The tank fills with water ever so slowly which is torture for 2.0. Eventually he drowns and his body is floating in the glass tank. Desiree says that boy is a star. All’s well that ends well I always say.

Hollywood, California 1960: Elsa is getting a star on the Hollywood Walk of Fame. She is also the star of her own show and married to Michael Beck.

Elsa is in the middle of making a coffee commercial when she becomes upset with the crappy writing and demands they give her better lines. Elsa goes to her dressing room. A lady in PR comes in to talk about a Halloween show. Elsa tells her she will be doing no such thing.

Massimo pays a visit to Elsa. Elsa tells him that now that she has everything she ever wanted she is no longer happy. Elsa tells him she wants to runaway with him that she loves him. Massimo tells Elsa it’s not going to happen because he is dying.

When it rains on Elsa it pours. The President of the network lets her know that the film that she lost her legs in has been found and a magazine is going to release it soon. Then he gives her a double whammy by telling her that the freaks from the freak show she used to run were all murdered. Elsa becomes extremely upset that her family is now gone. The President lets her know her contract is being torn up. Elsa tells him that she has changed her mind and will perform on Halloween after all. Elsa says she might as well go out with a bang. This is going to end badly.

The show begins and it is called The Elsa Mars Halloween Spooktacular. Elsa goes out on stage and she begins to sing a song.

Desiree walks past a store with TV’s in the window and stops and watches Elsa.

Jimmy is with the very pregnant Bette and Dot watching.

Edward Mordrake appears. Elsa tells him her place is not with him. Elsa crumbles to the floor.

Elsa is back with all her freaks and they are all alive and well. Ethel is there and all is forgiven. Elsa has finally found her heaven. Elsa heads out on the stage to perform. The crowd roars with applause. Elsa is home.