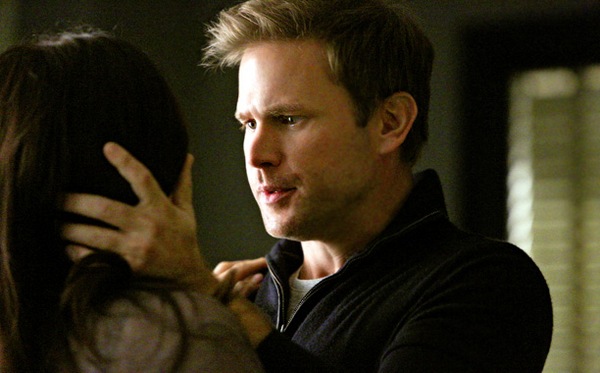 Elena wakes up and looks at Kai who is yammering away about eating. Elena realizes she is tied to a chair and ask him why he has her there. Kai brags about absorbing the Mystic Falls spell that prevented magic from entering the city. Kai tells her that spell will last him awhile. Kai then tells her about how he made the manager of the restaurant explode. That is such a True Blood thing to do. Elena is disgusted and demands to know what his damage is. Kai tells her since he can’t merge with Jo just yet he is going to practice on Elena to kill the time. Kai chants and the dead manager is lying on the floor. Elena freaks out and screams. Kai laughs his ass off. Freak.

Stefan gets abruptly woken up by some loud noises and music. Stefan heads downstairs and finds Jeremy there. Stefan wants Jeremy to put up some speakers at Caroline’s for him. When he doesn’t get a response he looks up only to see that Jeremy is already gone. It’s Jo and Liv he sees. Stefan ask Jo what she is doing there and she apologizes for breaking his vase. Alaric comes in and explains that Liv has got Jo on some kind of 30 day pre-merge training plan. So like a diet but with emphasis on die. Stefan just wants to know where Damon is.

Damon is with Liz in her hospital room. Liz wants to know why he is there. Damon acts offended and points out to her she is very lucky that plenty would die for a chance to see him in their room. Damon then tells her how Jo has decided to turn his house into magic central and that they can’t find Kai. Caroline comes in and starts over doing it with her mother. Caroline thinks giving her vampire blood will,save her. Liz is against it and Damon agrees and points out he has never seen it cure cancer. Liz wants to let the doctors do the treating. Damon agrees with Liz and then excuses himself to make sure Jo and company haven’t destroyed his house.

Stefan shows up at Liz’s house to help Caroline get her nice and comfy. Caroline wants to know if Stefan has ever been around someone with stage four cancer. Stefan tells her he hasn’t. Caroline hands her mom a Friends DVD set and tells her she is heading tomDuke to talk to a expert. Stefan tells Caroline he will give her a life because it just so happens he needs to meet with someone at Duke as well. Caroline tries to poke holes in it. Liz tells her to zip it and let Stefan take her. Once they leave Liz sits down in her chair and gives a deep sigh.

Back to a chained up Elena in the high school with Kai. Kai is looking at this and that. He looks at a picture of Elena and Bonnie in their cheerleading uniforms. Kai ask her if it’s ok if he changes her blood into acid one more time. Kai starts chanting. Elena starts screaming and begging. Kai must have chanted a little to hard because Elena’s chains melt and she takes off running. Elena runs to a sink and tries to stop her ring from melting but it’s already a done deal. Kai ask her about the ring and why it’s so important. Kai then explains to her he has never been able to understand sentiment. Elena throws a fireball at him and takes off running. She calls Damon from a red emergency phone no less and tells him Kai has her trapped in the high school. Kai finds her and the torture continues.

Caroline is with Stefan at a art exhibit at Duke. Caroline wants to know who he is meeting. Stefan tells her to meet her expert and he will catch up to her later. Stefan ask to see Sarah Nelson’s exhibit. Stefan listens to Sarah talk about her work. Enzo pops up and informs Stefan that Sarah really is quite the artist.

Caroline is talking to the expert about ways to reduce rumors like using hypothermia. She hands her her mothers records and then compels her to be honest with her answers. She tells Caroline the doctors are doing everything right. She lets Caroline know they will do complete brain radiation which will cause cognitive impairments. The doctor tells her she has a patient with the same problem who is essentially just killing time. Caroline ask to see the patient.

Elena has been tied up by Kai once again. He says he totally gets why Damon likes her. Elena wants to know if he has ever cared for anyone. Kai tells her his brother Joey who he beat to death. Kai tells Elena he likes who is. That’s what all demented psycho’s say.

Liv and Damon are outside the school. Damon wants Liv to do a cloaking spell so he can grab Elena and get the hell out. Liv tells him to take a chill pill. She disappears and we see Luke telling her she doesn’t have time for this then he disappears. Crazy. Damon gives Alaric a call and tells him Liv ditched him. Jo says she can do the spell. Jeremy offers to go with her and take out Kai.

Meanwhile over in twin land Luke and Liv are talking about the merge. Liv tells him if her and him merge she will surely be the one that dies. Liv says he can whip out all the books he wants but she won’t be reading any.

Matt takes Liz to see the dead restaurant manager. They know dude didn’t die from natural causes. Matt tells her this is going to be their life again now that the magic spell is gone. Liz becomes ill and falls. Matt catches her.

Caroline visits the patient. She sees all the pain killers he has to take. Caroline tells him she is sorry for that. Caroline also sees he has no family and she says sorry again. Caroline bites her wrist and drips the blood into his mouth. His eyes pop open and the machines start beeping crazily. Caroline looks at him and says he won’t remember this.

Kai is cutting his initial into Elena’s cheek. Elena wants to know why. Kai says it helps with his self control.

Jo and Damon are walking down the hall of the school. Kai comes down the other side if the hall and doesn’t see them. Kai dumps a coke can in the trash and then turns and walks back. Jo rather surprised says it’s working.

Stefan and Enzo have what passes as a decent converSation about this and that and oh yeah why is Stefan keeping secrets from Enzo’s BFF Damon. Stefan explains that Sarah is the daughter of Zach and that she was delivered in the hospital after Damon killed her mother. Stefan says if they tell Damon he won’t have anything to obsess about aside from his hair,his clothes, and Elena. Enzo says he will keep Stefan’s secret.

Caroline calls Stefan and tells him she needs him and to hurry. Stefan takes one last look over at Sarah and heads to help Caroline.

Elena manages to break free and she sees Damon. Damon tells her Jo brought him. Elena tells Damon that Kai melted her ring so they have to use the tunnels. Jo gets a nose bleed. Guess magic is like coke. Jo tells them she is fine.

Liv is telling Tyler that to despite his weak appearance Luke is in fact the stronger of the two of them. There’s a shock. Luke tells Liv he has no intention of killing her.

Jo is having some problems and tells Elena and Damon that cloaking three is a lot harder than cloaking two. Kai appears and agrees that magic is hard work. Damon ask Jo to make herself scarce so he can kick Kai’s sorry ass. Damon ask where Elena went and Kai quips he though Jo was the one cloaking people. Damon throws a sharpened mop handle and ends up nailing Elena. Kai is about to grab somebody and run but Jeremy shoots him with a crossbow. Alaric picks up Jo.

Caroline proudly tells Stefan that the almost dead cancer patient is getting junk,food from the snack machine. Caroline tells him he was almost a goner a hour ago. Caroline calls it magic. Stefan isn’t sold. Caroline ask Stefan to take her back home to see her mother. They head home.

Damon pulls the mop handle out of Elena who tries to trick him into barring what little soul he has with her before she dies. Damon knows it’s a trick and they laugh about it . Alaric and Jo walk over and Alaric ask Elena if she is ok. Elena tells Alaric she has never felt more alive.

Enzo compels the art curator to box up all of Sarah’s photos and give them to him.

Kai is drugged and knocked out at Alaric’s. Elena wants to make dinner for Damon the following night. Alaric brings Damon a drink and they toast to the women in their lives.

Turns out the guy is back in his bed in the hospital.

Caroline tells her mom she isn’t ready to tell her goodbye that she is supposed to see her graduate from college and get married. Liz tells Caroline she wants all those things as well.

The guy is just looking around and then he starts coughing and shaking.

Caroline puts her blood in a cup for her mom.

The guy is full on having seizures now. He starts spitting up blood and falls on the floor.

The guy is begging for help.

Caroline tells her mom she will be ok.

Vampire blood doesn’t cure it. It speeds it up.