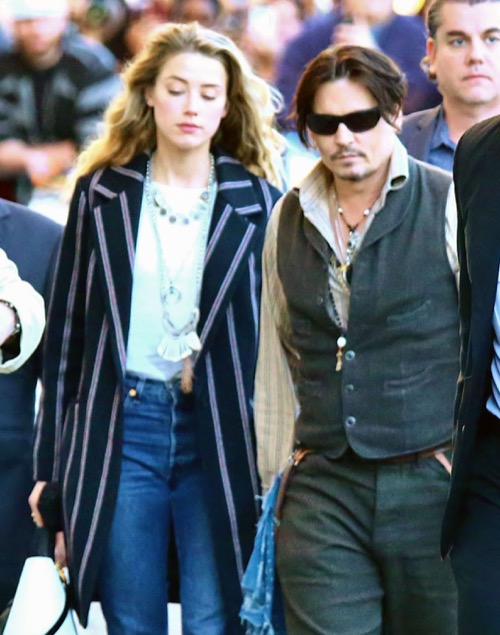 Johnny Depp and his new wife of half his age, Amber Heard, have gotten married and rumor has it the number one item on the wedding gift registry was…champagne.  Apparently, Johnny and Amber have a serious champagne guzzling problem, much to the disapproval of his ex-wife and baby-mama Vanessa Paradis.  New reports reveal that Johnny Depp and Amber Heard are spending more in a month on champagne than the average American makes in a year.

The February 16th edition of OK! Magazine explains, “Johnny Depp and his fiancé Amber Heard go through $25,000 a month in champagne!”  Johnny and Amber are spending the month on the road promoting his new comedy, Mortdecai.  While that doesn’t sound like a bad gig, Johnny thinks it is tedious.  So, a source says he has found a way to pass the time.

His primary request on his travel rider is “unlimited bottles of $200 champagne.”  A source close to Johnny Depp and Amber Heard revealed to OK! Magazine, “The buzz gets him through all the press interviews, which he hates.  And, Amber loves the top shelf stuff, so they just drink it all together.”

It’s no secret that Johnny Depp has some demons with alcohol, and how could we forget when he took the stage at the Hollywood Film Awards totally bombed and made an ass out of himself. It’s no wonder Vanessa Paradis is livid over Johnny and Amber’s wedding.  Vanessa wants the father of her children to be healthy and sober, and Amber seems to be more of the problem than the solution.  If Amber doesn’t reign Johnny in, and keeps encouraging his champagne habit – it is just a recipe for disaster.

Do you think that Johnny and Amber’s marriage will last?  Do you blame Vanessa Paradis for being upset?  Will being married to Amber just make Johnny Depp’s drinking problem worse?  Let us know what you think in the comments below!