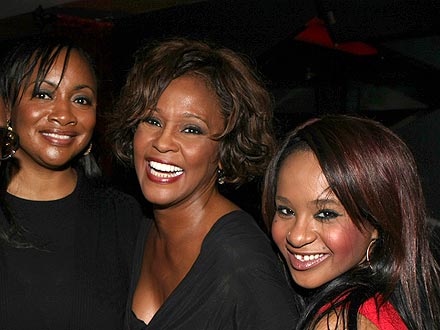 Much of the noise surrounding Bobbi Kristina Brown’s brain-dead state has to do with the fact that she’s currently on life support, and that’s the only thing stopping most of her greedy family from running after her inheritance as though their lives depended upon it.

In fact, the most recent report we heard stated that only Bobbi’s father, Bobby Brown, was actively against pulling Bobbi Kristina Brown off life support – and that’s because he thinks that that God will intervene and cause a medical miracle. The rest of the family is probably counting the minutes until Bobbi is declared legally dead, as harsh as that sounds. They want Whitney Houston’s inheritance that badly, even at the expense of Bobbi’s life.

To be fair, the doctors are all saying that there’s literally 0.01% chance of Bobbi making a recovery, miracle or no miracle. In that scenario, what actually would happen to Whitney Houston’s inheritance?

According to Radar Online, Whitney Houston reportedly did make a provision for the rest of the family should Bobbi die. And unfortunately, it does look as though Bobbi is about to die – one way or another. In that scenario, the will lists, “If no child of mine survives me: I give all jewelry own at my death to my mother, Emily Cissy Houston, if she survives me; and I give the rest of my tangible personal property to those of my mother, Emily Cissy Houston, my father, John R. Houston, my husband, Robert Brown, my brother Michael Houston, and my brother Gary Houston, as survive me to be amicably divided among them as they might agree, in shares as nearly equal as possible.”

And trust me, all these people knew exactly what they’re getting – and they’re chomping at the bit to get it.

What do you guys think about the provision that Whitney Houston made in regards to her surviving children? Do you think she had some inkling that her daughter might not make it to see her 30th birthday? Let us know your thoughts in the comments below.