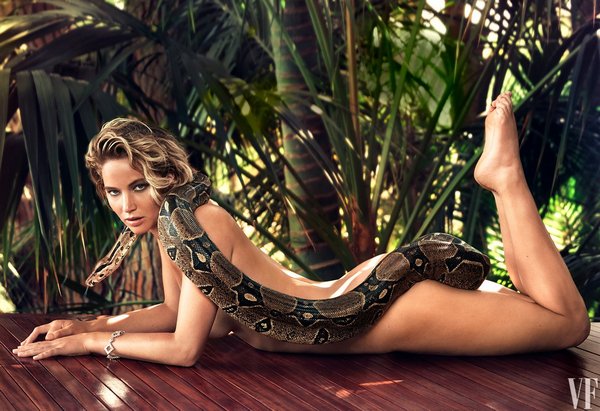 It’s been a few months since Jennifer Lawrence’s nude photo scandal, but everyone’s more or less moved on since then. Jennifer gave an in-depth interview a few weeks after the scandal, and she was so laid back about the whole situation that the public soon forgot about it.

It’s a mark of a true movie star that people are willing to forget such a big thing, especially so soon after it happened.

However, you’d think that after her nude pictures leaked, Jennifer might have been hesitant about posing nude for a magazine, right? Well, maybe not so much. In the Vanity Fair Hollywood issue, Jennifer Lawrence has an entire page to herself, and she’s posing nude with a snake.

Like, full body nude. Sure, you can’t see specifically see anything, but one would think that her team might have advised her against such a shoot.

Of course, knowing how open Lawrence has been about everything, she might have just said that it didn’t matter. I mean, the shoot is fairly tasteful, albeit still a nude photo. Plus, it’s in Vanity Fair’s Hollywood issue – and the image was snapped in July. Every industry executive and big producer will be reading that spread, and it definitely helps keep Jennifer’s ‘sexy’ image intact.

Jessica Diehl, who styled the photoshoot, told Vanity Fair, “Jennifer has the perfect combination of strength, sexuality, and humor, and, above all, tomboy to pull this off.”

The photoshoot has already received widespread media coverage, both in the industry and on the Internet, so clearly, it’s paid off.

What do you guys think about Jennifer Lawrence posing nude with a boa constrictor in Vanity Fair? Let us know your thoughts in the comments below.