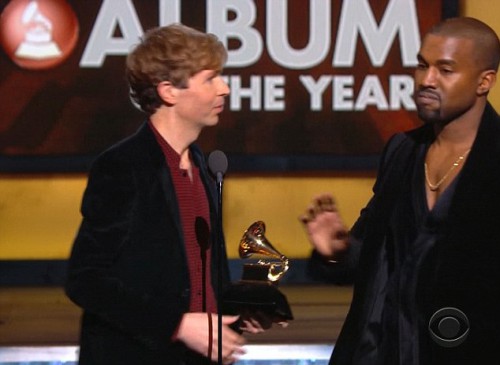 Kanye West and Beyonce have been friends for many years, and Kanye clearly thinks that means fighting her battles for her. When Beyonce lost the Album of the Year award to Beck this year, Kanye took it upon himself to let the whole world know that the Grammys have MADE. A. MISTAKE. Now, West has another embarrassment, this time at the Grammys after he stormed the stage again. As an encore to making himself look like a complete ass, he dissed Beck during an afterparty.

During the E! After Party interview, Kanye – with a very awkward looking Kim Kardashian standing next to him – decided to rant and rave [which he is prone to do] about how Beck should have given the ‘Album of the Year‘ award to Beyonce instead of keeping it.

Kanye’s exact words were, “All I know is if the Grammys want real artists to keep coming back, they need to stop playing with us. We ain’t gonna play with them no more. ‘Flawless,’ Beyoncé video. Beck needs to respect artistry and he should have given his award to Beyoncé, and at this point, we tired of it.”

When confronted by the paparazzi over his comments a day later, Kanye stuck to his guns. Although he clarified that he ‘loved’ Beck, he still says that Beck knows Beyonce should have won Album of the Year. I mean, Kanye’s so delusional about his place in the industry – and Beyonce’s, for that matter – that he thinks someone who just won ALBUM OF THE YEAR at the Grammy Awards should just give that up? And for what, exactly? A pat on the back from her highness Beyonce and his highness Kanye?

At the end of the day, people thought that Beck deserved that award. Maybe it was because Beyonce has enough Grammy awards and enough fame and enough attention, but Beck won that award, fair and square. And he is supposed to go GIVE it to Beyonce, just because West said so?

Yeah, delusional central. What do you guys think about Kanye West’s rant about how the Grammy ‘Album of the Year’ award should have gone to Beck? Let us know your thoughts in the comments below.